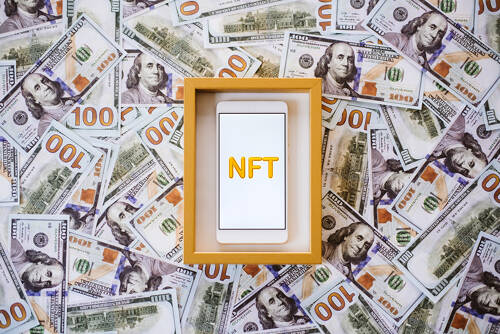 Aside from scouring NFL lines for the week’s most profitable underdog, it seems like one of the next popular ways of making money on professional football is going to be with the acquisition of non-fungible tokens, or NFTs.

We’ve already seen the popularity (and value) of NBA Top Shot NFTs soar, so it was only a matter of time before NFL NFTs started establishing a market. NFL All Day was announced as the league’s answer to Top Shot, and there’s already a waiting list for when these unique video clips are released late in 2021 or early 2022.

It may be somewhat bewildering to understand why clips of games are so popular and valuable when anybody can just go on YouTube or the NFL website and look them up, right? Well those clips would be called fungible tokens – like a dollar bill – they all have the same value (which isn’t much right now).

Football cards could also be considered fungible tokens in a way, since they produce 20,000 they all have the same value. Sure a Patrick Mahomes card is worth more than a Greg Zuerlein one, but all the Patrick Mahomes cards (in equal  condition) are worth the same.

Now imagine if the NFL trading card company produced 20,000 Greg Zuerlein cards, but only 20 Patrick Mahomes cards? Finding a Mahomes card would be incredibly rare and that’s the basis of non-fungible tokens. NFTs are unique and tied to the blockchain that way ownership can be authenticated because there is a record of every time the piece changed hands.

NFTs have most often been compared to art collecting, it’s not for everybody but the people who are into it – are really into it. There’s an NBA Top Shot of a Lebron James dunk that is worth $1 million, but that might just be the tip of the iceberg for NFL NFTs. Can you imagine owning the one authenticated video of “The Catch” by Dwight Clark or the David Tyree helmet catch from Super Bowl XLI? That would be like owning a da Vinci painting.

And that is what is driving the popularity of the NFTs, they are a collectible investment. We’ve seen The Catch a million times just like the Mona Lisa is etched in people’s brains, but this gives people a chance to “own” those assets – in the cryptoworld at least.

NFL All Day should run very similar to the NBA’s Top Shot considering the same company, Dapper Labs, is going to be involved in distributing what they call ‘moments.’ All Day is going to be collectible video clips that are released in packs, kind of like a football card.

Packs can be purchased based on rarity, costing anywhere from $9.99 to $999 in the NBA. Getting something valuable out of these packs is not guaranteed, just like buying a pack of football cards. If you do get something like a Derrick Henry 99-yard TD moment however, that can be sold basically to anybody – or it can be kept in your crypto wallet and kept while the value continues to climb.

The concept of NFL NFTs is not new, as the league partnered with Ticketmaster to provide digital tokens to fans who attended games in person. It’s basically the ‘saving your ticket stub’ souvenir but in digital form. They might not have any value beyond sentimental for most games, but potentially could if a record was broken or if it was the last time a player took the field.

A beat up, ripped in half physical ticket from the 1967 Ice Bowl is being bid to $400 with 4 days left on eBay as of this writing, so there’s value in almost anything related to the NFL.