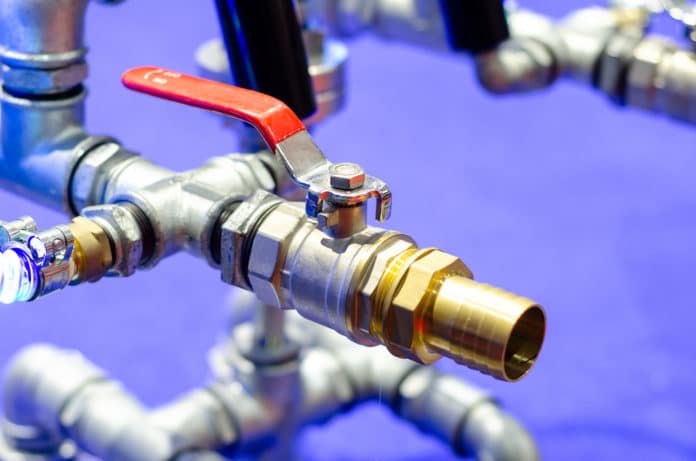 Can you imagine a world without running water? It might not surprise you that the Romans may have invented the valve.

While through the flow of time there have been many innovations in the valve design, the basic concepts remain the same. The purpose of a valve is to restrict, cut, or open the flow of a gas, liquid, solid, or hybrid medium.

We see valves everywhere in our daily lives and don’t even notice the vital role they play. Microscopic valves even control your computer by changing the flow of electricity!

It’s important for the information on a computer to go where and when it’s needed. Likewise, it’s also very important that whatever is flowing in a pipe gets to where it’s needed, when it needs to be there.

Today we’re going to cover one of the most common valves you’ve never noticed: ball valves. How does a ball valve work? What makes it different from any other valve?

Putting It Together From the Top Down

Almost every valve has many parts, and most of them move. Ball Valves are no exception, but because it’s a simple design, it has few major parts.

We’ll start our anatomy lesson from the top and work our way down into the center of the ball valve.

Getting a Handle On Valves

The first and most obvious thing you might notice about a ball valve is that it almost always has a handle actuator. This is not an aesthetic choice, as the direction the handle is pointing indicates whether it’s closed or open.

But, larger ball valves do have handwheels or electrical, hydraulic, or pneumatic actuators. This is especially the case for industrial ball valves, as they have a greater amount of friction to overcome to open and close them.

As we move down from the valve actuator, and before going to the housing, there is the stem. It runs from the handle retaining nut all the way into the housing and ball disc.

It’s a shaft that translates the motion of the handle into the disc, whatever the shape.

What’s in a Name? Discs

Speaking of discs and shapes, the part that does the real work in a valve is often called a “disc”. This is also the part of a valve which it is often named after. Other valves are called gate valves, butterfly valves, and globe valves (often confused with ball valves).

Can you guess the shape of a ball valve? You guessed it—a ball!

This ball is special, in that in the most simple version of the valve a hole is drilled straight through the middle. Some variations have a 90-degree bend or 3 openings in the ball at 90-degrees from each other like a short capital “T”.

With these variations, you can have a water valve that flows out of two channels, or one.

Often, the valve aperture is one step down from the pipe size, but, the bore can also match the inner diameter. These are usually more expensive as it requires the whole mechanism to be sized up.

Above and below the “floating” ball disc there are “seats” or almost bearings, which keep the ball disc in place and help it rotate within the valve housing. These materials are often made of Teflon or another similar surface. Depending on the medium and pressures involved need metal.

It’s like cartilage in a ball joint in our bodies and helps the valve rotate and stay in place.

We all need a place to live, and the ball valve is no different. The housing is where all these components live and work. The connections to a pipe might differ from ball valve to ball valve, but the two most common are pipe threads and flanges.

Depending on the application some or all the parts of the ball valve can be made of plastic, metal, or a hybrid.

Some of the most common types of ball valves for home use might be on your fish tank, for use with PVC piping. Another might be brass, to be used in gas applications where there is a “no spark” rule.

Okay, But How Does a Ball Valve Work?

Now that we know the parts of the valve, it might be easier to imagine how it actually works!

Ball valves are a type of valve called a quarter-turn valve. As the handle at the top of the valve turns 90-degrees, the valve will open or close. For this reason, it’s called a rotary motion valve, as opposed to a linear motion valve like the simple gate valve.

The purpose of the ball valve is to turn the flow on or off fast and is thus not recommended for throttling flow. This is a drawback and an advantage. If a ball valve closes quickly and there is too much pressure or volume being held back, it can cause a sudden surge in pressure.

For comparison, a gate valve is much slower and requires turning a handwheel several times.

The reason for using a handle is also to see if the valve is in an open or closed position. If the handle is in line with the pipe, it’s open, if it’s perpendicular to the pipe, it’s closed.

This reduces confusion and increases safety. For a handwheel, this level of certainty and safety is impossible.

Ball valves are renowned for their superior seal, reliability, and low-pressure drop attributes.

If only we could all boast these qualities!

You probably won’t have a friend ask you “How does a ball valve work,” but now that you know, feel free to educate others.

Valves of all kinds have various applications in untold numbers of high-tech gadgets and systems. With your newfound awareness, you might view such a simple and well-designed concept with new appreciation.

Just remember any time you flip on a faucet or turn off the gas to do some home repairs, you and the Romans both love living in a world with valves. Are you ready to flow into more great home and auto articles? They’re only a click away!

GizmoCrazed - March 17, 2019 0
We’ve decided to step back from the breaking news for a minute to conduct a review of seed and early-stage funding trends over the...