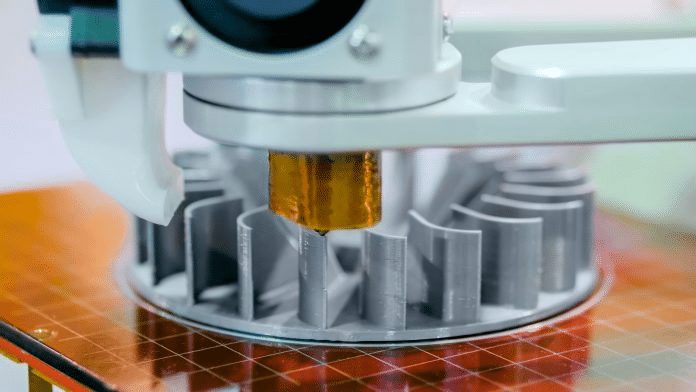 3D printing is a hot topic at the moment and now engineers from Graz University of Technology or TU Graz have come up with a new metal powder additive manufacturing system that uses LED not laser to melt powder.

The process is called selective LED-based melting or SLEDM and has been created by a team led by Granz Haas, head of the Institute of Production Engineer at the Austrian university.

Currently, there are two main ways that this kind of process takes place – selective laser melting (SLM) and electron beam melting (EBM).  The first uses a laser beam while the second uses an electron beam to melt the powder to then be printed.  But with the ned SLEDM system, the powder is melted by a special high-power LED light source.

According to the experts from TU Graz, there are many benefits to this new system over the previous ways of melting the powder.  For starters, it takes less time and there is less metal powder required as less is wasted.  There’s a reduction in equipment costs and also the amount of post-processing required.

Dr Haas said that the new process cuts out time-consuming reworking that is a common part of the current system.  This is often done manually and slows down the process of completing the part.  Smoothing rough surfaces or removing support structures are two examples of processes not required with the new SLEDM system.

While all of this sounds fascinating, the real question is what are metal powder bed fusion processes and what are they used for?

Currently, SLM and EBM are part of additive manufacturing processes.  In them, with either a laser or electron beam, metal powder is melted then fused into layers to make a component.  Layers are built up one at a time by a 3D printer to form the part required.

Both are currently used for some of the most complicated processes out there.  Aerospace industries use them with the European Space Agency using SLM 3D printing to create an entire rocket engine in 2019.  Rocket Lab, the California based company, also uses such systems to create their entire engines, used in their Electron Rocket.

The TU Graz team aims to develop the abilities of 3D printing even further and they are one of a number of teams around the world looking at new developments to existing additive manufacturing systems.

New ways to use LED

What makes the TU Graz approach interesting is the use of high power LEDs to solve key problems that both of the existing systems find.

With the new LED-based system, it is possible to produce large volume metal components and do so quickly.  There’s also a reduction in the time spent post-production in fine-tuning the components and finishing them.

As well as potential applications in areas such as aerospace, the new 3D printing system has potential for medical applications.  The university opened its 3D printing lab in 2019 and there it is producing parts such as magnesium alloy screws used for bone fractures.  With the new system, it will be possible to fabricate the implants directing in the operating theatre because LEDs are much less dangerous than lasers.

As tests continue, the team expect to see an ever-expanding range of applications for their new process.  From printing components for battery systems or fuel cells to making more medical parts, there is no shortage of ways that the new SLEDM system can potentially improve our existing processes or create new ones.

You Aren't Ready for the Weirdness of Working With Robots

GizmoCrazed - October 12, 2017 0
Humanity is entering a confusing time: the Age of the Bizarrely Intelligent Robots. No longer confined to cages on factory floors, the machines are...