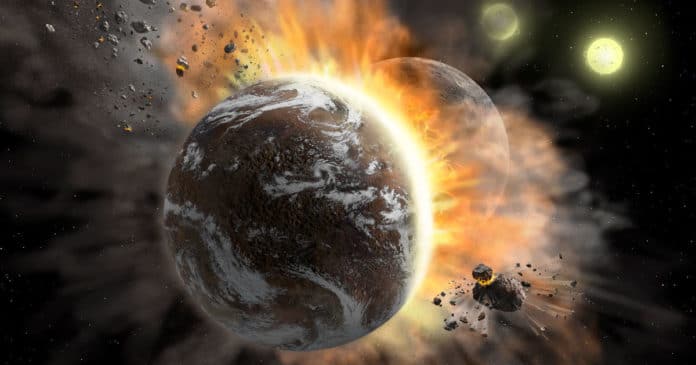 300 light-years away, two exoplanets recently crashed into each other, obliterating both and leaving a giant trail of dust and debris — or, in other words, planet guts.

The universe is a violent place, and space stuff collides with other space stuff pretty frequently. But usually these collisions happen in the earlier years of a solar system or galaxy — CNN reports that these shattered exoplanets give astronomers a rare glimpse into what happens when already-formed worlds collide.

Most surprising to astronomers was the fact that the dust leftover from the collision was warm, according to CNN. Because the shattered exoplanets were orbiting a pair of billion-year-old stars, they expected the dust to be much cooler than measurements suggested, according to research published in The Astrophysical Journal earlier this year.

“The warm dust around [the star system] gives us a glimpse into what catastrophic impacts between rocky exoplanets might be like,” lead author and UC Santa Cruz grad student Maggie Thompson said in a new NASA press release. “We want to know how this system subsequently evolves after the extreme impact.”

Because it was two fully-formed exoplanets that collided, astronomers now have an unusual opportunity to the composition of study rocky exoplanets, and perhaps how they formed in the first place.

“This is a rare opportunity to study catastrophic collisions occurring late in a planetary system’s history,” Carnegie Institute for Science researcher Alycia Weinberger said in the NASA release.

READ MORE: What happens when exoplanets crash into each other? [CNN]

More on other worlds: This Rocky World With Three Suns May Have an Atmosphere