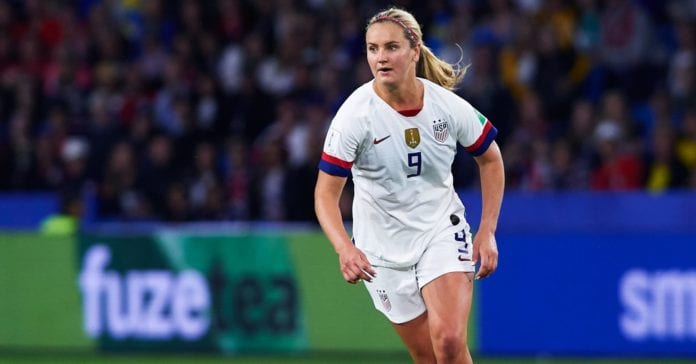 The Women’s World Cup is in full swing, and today the Americans will face off against France in a battle to advance to the semifinals. This year’s American team is a strong one, both in personality (they are currently engaged in an equal-pay dispute with the US Soccer Federation) and in style—they started the tournament with a 13-0 rout over Thailand.

This year’s squad is also unique because it’s the first US women’s soccer team with women who chose to skip college soccer and go straight to the pros. Mallory Pugh and Lindsey Horan were the first American women soccer players to make that decision, but they are hardly the last. This year, Olivia Moultrie became the youngest American woman to go pro when she signed with the Portland Thorns soccer club at age 13. While going pro before college is relatively common in men’s sports, the practice is starting to grow in women’s sports too.

Their stories are enough to make you want to put down your screen and start running laps. Horan and Pugh started playing at 5 and 4 years old, respectively. Moultrie was playing with boys’ teams by the time she was 10 and signed an agreement to play for the University of North Carolina the following year. They are incredible, young, focused athletes. They didn’t dabble in other sports; they homed in on one and excelled.

Specialization, a singular focus on one particular sport, can be great for lots of kids. They develop skills early and, if they want to, can compete at an elite level. For sports like gymnastics, where the window of competition comes early in an athlete’s life, it’s essential. As women’s sports become a more financially viable career path, it’s possible more specialized athletes will follow in the footsteps of Horan, Pugh, and Moultrie. But a growing body of research shows that specializing too early can cause a host of issues that drive kids away from sports and make young athletes more vulnerable to injuries.

Over the past decade, specialization has become the norm in kids’ sports for a variety of reasons. It’s perpetuated by media phenomena like the Little League World Series, the finals of which are broadcast on both ESPN and ABC and watched by over a million viewers, more than double the number of people who tune in for the WNBA. It’s lauded by thousands of YouTube videos of rising stars like Sky Brown, a 10-year-old pro surfer and skateboarder who is aiming to compete in the 2020 Olympics. Then there’s the $2.9 billion in college sports scholarships, more than double what it was 15 years ago. “Sports performance has always coincided with the stories we tell ourselves about the American Dream,” says Matt Bowers, a professor at the University of Texas, Austin, who studies athlete development. “Being able to work your way towards a better life through this type of outlet.”

Private sports clubs too have spurred more early investment in sports. They began with youth hockey teams in the 1970s and today cover nearly every mainstream sport, including soccer, basketball, baseball, and softball. Those teams, which are open to kids as young as 6 or 7, play year-round and often leave little time for other sports or for free play. “It makes sense for somebody who’s running a private sports club to want you to specialize year-round, because that’s their livelihood,” says Bowers. “We have to acknowledge that a part of the specialization is that it’s in a lot of people’s financial interests to have kids specializing and participating year-round.”

There’s something intuitive about the specialization approach as well. Want to be good at violin? Practice reading music and playing. Want to be good at soccer? Play soccer. With sports, however, development isn’t that linear: The so-called 10,000-hours rule just doesn’t apply. Playing multiple sports can actually help young athletes gain important skills, while focusing on only one could end up hurting their long-term development.

One issue, says Bowers, is that kids who specialize often don’t get enough rest time to let their bodies heal. That means more stress on ligaments, joints, and muscles, which wear out. Sometimes those injuries can heal with just some rest, like shin splints. But others have more severe consequences. One stark example is the dramatic rise among young pitchers of Tommy John surgeries, an elbow-ligament repair named after the pro pitcher who was the first to receive the procedure in 1974. The surgery was initially only done on professional pitchers who had spent years in the major leagues. But one 2015 study found that nearly 57 percent of Tommy John surgeries performed between 2007 and 2011 were on teenagers.

Right now there’s not enough data on specific sports, but Neeru Jayanthi, a doctor at Emory Sports Medicine who studies specialization, estimates that on average, specializing can double the risk of injury for young athletes. “These children have adult-level skills, but they’re still in a child’s body,” he says. “You have to remember that they’re doing phenomenal things on the tennis court, but when you’re talking about training loads and their ability to tolerate this week after week and year after year, they’re still a child.”

Another issue for kids who specialize very early is that they don’t always develop a range of good motor skills. Practicing jumping, throwing, sprinting, kicking, and catching all contribute to a well-rounded athlete and healthy kid. When children only practice one sport, they refine a narrower set of skills. But the unpredictability of sports—a big jump to catch a stray ball, a sudden change in direction—can push kids to do things their bodies aren’t adept at, putting them at risk of injury. “Those kids that specialize earlier, they tend to have less coordinated joints,” says Greg Myers, a doctor at Cincinnati Children’s Hospital.

Myers says that while overuse injuries can be solved with a little rest, these coordination problems and poor mechanics, which affect the ankles, knees, hips, and glutes, can plague athletes into adulthood, putting them at greater risk for acute injuries like ACL tears. “The neuroplasticity, or how we adjust our neuro-muscular control, continues to be open when kids are pre-puberty through their adolescent years,” he says, but the older kids get, the harder it gets to fix imbalances.

Beyond physical injuries, burnout is also a risk. Headlines are replete with cautionary tales of players like Freddy Adu, a child soccer prodigy who went pro at 14 but never grew into the adult star people expected him to become. Of all the thousands of little girls on club soccer teams around the country, only 23 will make it onto the World Cup squad. Putting adult pressures on younger athletes drives some kids away. “We have a way of talking to kids and treating them like they’re little professional athlete robots, because we think that will toughen them up,” says Bowers. “But a lot of kids aren’t emotionally ready to handle the winning, the losing, the yelling.”

Of course, if you want to go pro, you have to specialize eventually. Researchers say that while there’s no magic number, high school is about the time to start concentrating on one thing. There are also ways to curb these injury risks. Some coaches, for example, intentionally tailor strength and conditioning routines to help players develop different motor skills, particularly around proper jumping technique. Leagues can reduce the number of games and practices they hold. USA Hockey has already adjusted its expectations, creating an American Development Model that focuses on age-appropriate development. Younger players use smaller rinks and are encouraged to try other sports, like tennis, during the summer. Other leagues, including USA soccer, have started to follow suit.

But the effects of specialization on American sport culture are more insidious and longer lasting. “The greater public health worry is that we’re getting a small group of kids who are playing sports all the time and a larger group of kids who are playing videogames,” says Jayanthi. Over the past several decades, as private clubs grew, local park and recreational budgets shrank. Families that can’t afford expensive leagues, or who don’t have the resources to ferry kids to endless practices and far-flung tournaments, now have fewer options. The Aspen Institute found that two-thirds of low-income kids don’t play any sports at all. By comparison, in households with an annual income of at least $100,000, nearly 70 percent of kids played.

The system has also become self-sustaining. As more kids participate in private club sports, local rec leagues lose more of the good players and coaches. The quality of play and coaching in those leagues diminishes, driving even more parents to put their kids on private teams. The park leagues then cut back budgets even further. “It’s making kids’ sports more exclusionary,” says Tom Farrey, head of the Aspen Institute’s Project Play, who notes this system also pushes aside late bloomers who don’t grow into their bodies until high school or college.

The solution to all these problems is, perhaps, obvious. Play lots of sports. Especially if you’re a little kid. Abby Wambach, for example, attributes her signature heading prowess in soccer to her experience as a basketball player, where she learned how to track the arc of the ball and how to time her jump to intercept it. Another solution is to stop thinking of children’s sports as a place to groom elite competitors. “Childhood is the time of exploration,” says Farrey. “Carve out time for them to do other things.” It could help their athletic prowess in the long run. If nothing else, they might at least have more fun.