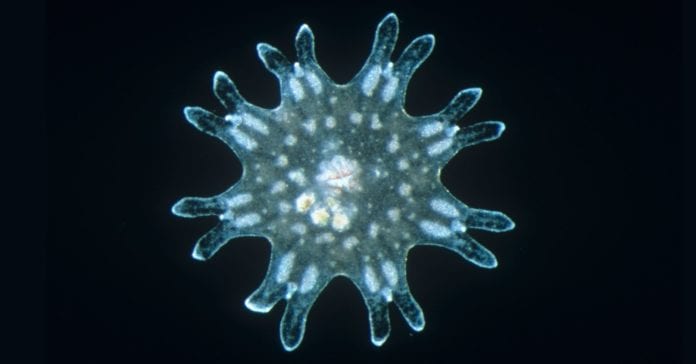 You’d be hard-pressed to find more opposite opposites than jellyfish and robots. Jellyfish pump through the oceans with effortless grace, while robots struggle to not fall on their faces—and that’s when they’re not catching on fire.

Now, though, those two worlds are merging, with a tiny, exceedingly simple robot modeled after larval jellyfish that can scoot around untethered like the real thing. At less than a quarter inch across, the magnetically activated robot mimics the entrancing locomotion of a jellyfish and can use the resulting disruption of water flow to manipulate objects or burrow into the ground.

The jellyfish robot has eight arms, consisting of a soft base with magnetic microparticles embedded, and tips made of non-magnetic “passive” polymers.

Researchers place the robot in a tank surrounded by electromagnetic coils. By manipulating the magnetic field, they can control the magnetic bits of the robot’s arms. “If you apply a slow magnetic field in an upward direction, the arms will bend up slowly,” says Metin Sitti, director of the Physical Intelligence Department at the Max Planck Institute for Intelligent Systems and coauthor of a new paper describing the robot in Nature Communications. “And then we do a very fast sharp downward magnetic signal that bends the arms very fast downwards.” The tips of the arms then also bend, mimicking the gelatinous movements of an eight-armed larval jellyfish. (Adults grow the stinging tentacles we know so well.)

It’s about as simple as robot locomotion gets. But that simplicity creates surprising versatility in the robot’s movements, or modes, as the researchers are calling them.

Take a look at the GIF above. Mode A mimics most closely the way a larval jellyfish moves, but the researchers can tweak the magnetic field to create new movements. Mode B1, for instance, uses more forceful contractions for stronger bursts. B2 allows for less recovery time before the next contraction. B3 holds the arms down longer following a contraction, generating a more streamlined glide. And mode C opts for weakened bursts. Manipulating the magnetic field also allows the researchers to steer the robot in 3D space.

The robot can selectively transport beads of different sizes.

That versatility doesn’t stop at locomotion. By mimicking the way a larval jellyfish eats, the robot can capture objects. When a jellyfish swims, its contractions force water under its bell, and that water carries microorganisms. This robot does the same, only with beads spread at the bottom of the tank. When it lifts off from the ground, the water flow traps beads under the bell and drags them upward as the robot heads to the surface. Meaning that even though this robot doesn’t have hands, it can still manipulate objects.

It can also burrow into the beads for camouflage.

The robot can also burrow into the beads, using its arms to sink and push its way into the bottom layer of the tank. And if burrowing isn’t your thing, you can add a layer of dye at the bottom of the tank—a separate color on each side of the robot—and the mechanical jelly’s motion will rapidly mix the two and drag them up the water column. This shows that, again, a robot need not have hands to be able to manipulate materials.

So from pretty much the simplest kind of robot you can imagine, researchers can tease out a vast array of uses. It’s a significant departure from the usual ways robots manipulate objects, trading in hand-like graspers for a system that strategically pushes around water. “That’s the amazing thing about very simple soft-body systems,” says Sitti, “that they can create many complex deformations that induce many diverse behaviors.”

There is, of course, the limiting factor of magnetic energy. Before robots like this can explore the real world, researchers will have to figure out how to power and actuate them some other way, with hydraulic systems perhaps. And the machines will have to sense their world somehow, which will add extra complexity and bulk.

“This is a really clever design,” says Stanford engineer John Dabiri, who studies jellyfish locomotion. “It reflects a growing interest in our field to go beyond robots that merely mimic animals, and to instead explore design ideas that nature hasn’t yet stumbled upon.”

Bonus: Robots like this are much less likely to catch on fire if they’re underwater.