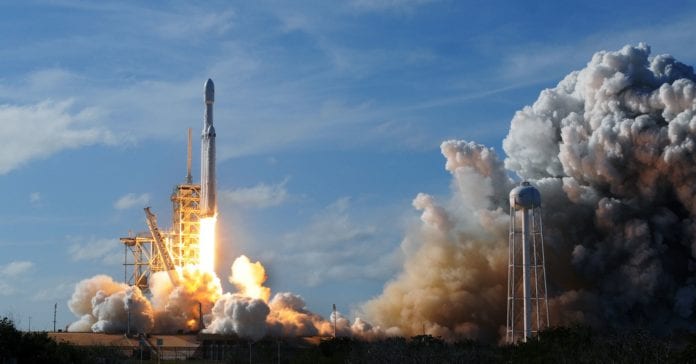 When a rocket launches with some payload (like a satellite), it needs a fairing. The fairing, essentially the rocket’s nose cone, is the covering on top of the payload that makes the spacecraft aerodynamic as it speeds through the Earth’s atmosphere. But once the rocket gets past most of this air, it doesn’t need the fairing—it becomes extra weight. So the fairing gets ejected and it falls back to Earth.

Now enter SpaceX, the rocket company founded by Elon Musk that likes to try new things. It turns out that these fairings aren’t cheap. For the Falcon Heavy rocket, it appears they can cost about 6 million dollars. If you can rescue the fairings instead of just throwing them away, that can be some big money. And of course saving money means it will become cheaper to reach orbit (in the long run).

So here’s how SpaceX plans to save its fairings. Once the fairings are ejected (they come in two pieces), they use small thrusters to help guide them to a landing zone. When they reach a low enough altitude, the fairings use a large parachute to slow them down even more. Next comes the magic part. The parachuting fairing will be caught by a large (and fast) boat with a giant net on top of it. It seems like some crazy plan a 4th grade student would come up with—but it’s real. Oh, it’s real AND it worked. In the most recent Falcon Heavy launch, a fast ship named Ms. Tree (yes, that’s the actual name of the boat) caught one of the fairings, the first time SpaceX managed to pull that off.

This is such a crazy event, it’s a great inspiration for a physics problem. An exercise like this was probably the first step in the project to catch the fairings. Using some rough estimated values, we can see if catching the fairing is even possible. That’s the goal of a “back of the envelope” calculation—a real thing. It’s called “back of the envelope” because you don’t even put enough time into the problem to bother getting a real piece of paper.

First, how long would it take a fairing to fall from the rocket? Suppose the fairing drops from a height of 100 kilometers (a rough approximation for the edge of space). Of course the fairing would increase in speed as it falls, but as it enters the higher density air (at lower altitudes) it would also encounter an air resistance force that increases with speed. Eventually, the fairing would reach some constant falling speed, where the downward gravitational force and the upward air resistance cancel. This is known as the terminal velocity. If the air drag force depends on the square of the velocity and the shape and mass of the object, it can be calculated as the following (here is a recent post with more details about terminal velocity):

In this expression, we have the following variables:

Putting all of this together, I get a terminal velocity of 20 m/s (45 mph)—you can see my calculations here. If the fairing starts from an altitude of 100 km, that would take 82 minutes to reach the surface. But I feel like this is too long. Of course, for much of the time that the fairing is falling back to Earth, it would be going much faster than this calculated terminal velocity because the density of air is so low. So, as a rough estimation let’s just say the fairing takes 41 minutes to get back to the surface. Don’t worry, rough estimations are fine.

Now that I have the falling time, I can think about Ms. Tree. I know it’s a “fast” boat—but I really don’t know what that means. It’s kind of big, so maybe it is like 25 mph fast and not 50 mph fast. Let’s just go with a boat speed of 30 mph. I’m totally guessing here. So, if the boat can travel at 30 mph and it has 41 minutes to get to the rendezvous spot for the fairing, how big of a target area do you need?

In this case, it might be easier to use a time interval of 41/60 hours (since the speed is in miles per hour). During this time interval, we can calculate the straight line travel distance as:

If you imagine that Ms. Tree could travel this distance in any direction, you can see the total target area is a circle. The area of this circle would be 928 square miles. That seems fairly large—but still, this is the ocean we are talking about. And this target area might be even smaller. I assume that it takes some amount of time to determine exactly where a falling fairing is located and what its trajectory would be.

OK, now for a physics problem. Really, all of this estimation was just an excuse to do some physics. Here is the problem.

A SpaceX fairing is falling from an altitude of 50 km and falls with a constant terminal velocity of 20 m/s. You are the captain of the fast boat Ms. Tree. Mission control has just determined that the fairing will land a distance of 12.3 km from your location. Since you are trying to impress everyone, you decide to wait until the last possible moment to travel to the rendezvous site. How long should you wait?

See? Real-world physics problems. I’m just kidding about the real-world thing—but it’s still fun. OK, but how do you solve this? Of course you could set up some basic algebraic equations and figure this problem out. Honestly, the solution isn’t too complicated. But I like to do things differently. How about solving it with python? I don’t know about you, but I love python. It’s the best.

Here’s the code for my solution and I will give some notes below. You can see the code by clicking the “pencil” and then if you change anything, just click “play” to rerun it.

Students (and other humans) are often intimidated by coding solutions. But the cool part is that you can solve this problem in any number of ways. Don’t think you have to have an elegant algorithm or something. Just make something that works. Here’s how my method works.

I hope you can see that coding isn’t that scary. You should try it. How about this—here are some homework problems for you to practice on.