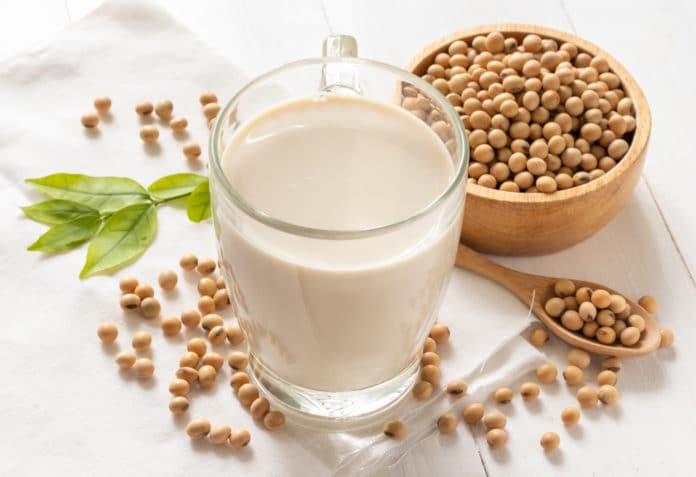 Soy products have repeatedly been found to help cholesterol levels. But do they do enough to make a difference? (Credit: 1989studio/Shutterstock)

If you pick up a carton of soy milk, chances are you’ll spot some sort of verbiage boasting the beverage’s heart health benefits. But it’s not the only soy-based food product bearing a “heart healthy” badge. That’s because, in 1999, the Food and Drug Administration (FDA), the federal agency responsible for supervising food and drug safety guidelines, approved the claim that soy, and the protein that comes from it, can help prevent heart disease. The decision was based on decades of research that supported the connection between soy and its cholesterol-lowering properties, which can help prevent heart disease.

But in 2017, the FDA announced a plan to downgrade the claim, citing inconsistent evidence that has cropped up since 1999. It was the first time the FDA backtracked on an official claim of this nature.

Now, a new paper published in June in the Journal of the American Heart Association (JAHA) is challenging the basis of the FDA’s decision. Looking at the same reports the FDA analyzed in 2017, University of Toronto researchers found that the science has consistently supported the claim that soy has an impact on cholesterol levels and thus heart health.

When the FDA first approved the claim, the agency based its decision on all the evidence on the link between soy and heart health that was available at the time. Those studies showed soy decreased levels of cholesterol in the bloodstream — especially low-density lipoprotein (LDL) cholesterol, often called the “bad cholesterol,” since it clogs veins.

With that research, and based on the consensus within the scientific community, the agency issued an authorized health claim, the highest classification possible on the tiered system the FDA uses to sort such claims. (Since 1990, the FDA has only approved 12 authorized health claims, including the link between taking vitamin D and calcium supplements to help prevent osteoporosis, and the link between eating more veggies and reducing your risk of some cancers.)

Now, the FDA wants to bump that 1999 claim from authorized down to qualified. These types of health claims are backed up by credible evidence, but the scientific community hasn’t reached a general consensus on it.

Since 1999, the research on soy has been mixed as to how significantly it protects heart health. For instance, in 2006, Harvard professor of cardiovascular disease prevention Frank Sacks helped conduct a review of 22 studies that found soy lowered people’s LDL cholesterol levels — just not significantly.

“The result is that, yeah, soy protein lowers LDL cholesterol … but it’s sort of meaningless,” he says. Overall, soy only lowered cholesterol by about 3 percent, he found. So if you’re eating lots of foods like red meats, which raise cholesterol levels, soy won’t do enough to cancel that out.

But David Jenkins, a professor of nutrition at the University of Toronto and lead author of the new JAHA paper, disagrees with the stance that soy’s effects are too miniscule to still warrant an authorized health claim. “Since 1999, there has been no period, no time, where the cumulative studies have pointed in any other direction,” he says.

In nearly every study Jenkins and his University of Toronto team analyzed, they saw that soy had a meaningful, beneficial effect on people’s LDL and total cholesterol levels.

Still, there may be reason to be leery of the findings. The University of Toronto study was funded by a number of groups with ties to the soy industry, though the authors noted these relationships in the disclosures.

This type of funding isn’t an anomaly in nutritional studies, either. Although Sacks’ 2006 study was funded by the American Heart Association, he says nutrition studies aren’t typically the ones attracting big grants from unbiased scientific societies.

“Most of the research in the nutrition field is funded by industry,” Sacks says. “I don’t agree that all industry-sponsored studies are bad … but it’s just a trickier situation.”

Regardless of who funded the research, in the grand scheme of things, it seems soy’s reputation is up to the FDA. And while scientists aren’t in unanimous agreement that soy is a miraculous, heart-saving superfood, no one is saying soy is bad for you — just that it might be overhyped.

GizmoCrazed - October 14, 2017 0
Supersolid, a London-based mobile games developer with more than 50 million downloads under its belt, is best known for the smash hit games like...