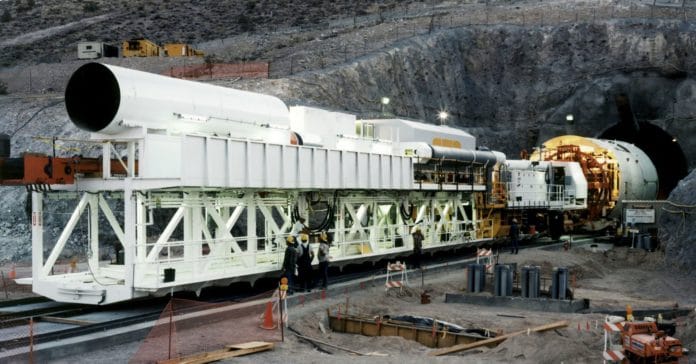 On Thursday senators tackled the radioactive question of the nation’s nuclear waste, this time with a new plan to circumvent the hot-potato politics that doomed Yucca Mountain and other proposals. A combination of new legislation that spreads out the nuclear waste burden and perhaps new technology could offer a new way forward.

Everyday, the Department of Energy sends $2.2 million to the nation’s electric utilities to store spent nuclear fuel that has nowhere to go. Under a 1982 law, the federal government was supposed to pick up the nuclear industry’s waste and put it in a safe place underground for the next few hundreds of thousands of years (the half-life of some radioactive isotopes). That deadline passed in 1998, and after more than two decades of lawsuits and political delays, there’s still no permanent location to put the nasty stuff. Instead, spent fuel rods are sitting at 95 nuclear plants around the country in either “fuel pools,” where the waste cools down for a few years after the rods finish producing energy, or in special steel-and-concrete casks that sit above ground like nuclear garbage cans.

Pretty much everyone—utility industry leaders, environmentalists, nuclear engineers, and local mayors—knows the status quo isn’t working. Nobody wants to invest in an industry that can’t deal with its waste (even if it’s carbon-free); and nobody likes the idea of these nuclear-rod-carrying casks multiplying ad infinitum.

The place that the government picked to store all the nuclear waste back in 1987, a repository in Yucca Mountain, Nevada, was canceled in 2009 by the Obama administration. Since then, the project has been in a bureaucratic limbo. The Trump administration moved to take another look at Yucca Mountain and restart the licensing process, but Congress removed funds to do that from last year’s budget.

Despite these obstacles, there’s a glimmer of bipartisan hope on Capitol Hill that this nuclear logjam might be broken, although maybe not at Yucca Mountain.

“It is long, long past time to figure this out, and the sooner we find a path the better,” said Senator Lisa Murkowski (R–Alaska) as she opened a hearing on the issue Thursday in the Senate’s Energy and Natural Resources Committee. Murkowski is sponsoring a bill that would both create a new agency in charge of handling nuclear waste and develop a way for local consent to become part of the decision-making process, although insulated from pressure by members of Congress. That means that the local residents living near a selected site—either temporary or permanent—would get some say in the matter, although perhaps not a veto.

At the hearing, experts testified that without some kind of storage facility, the nuclear industry will continue its slow decline. Nearly all of the nation’s plants were built in the early 1970s. Five are scheduled to shut down by 2025. Plans for two new nuclear reactors in South Carolina got scrapped in 2017 after contractors ran over budget and locals were forced to spend $9 billion to dig a hole in the ground and then fill it back up. A new plant under construction in Georgia has been tied up in contractor fights and court battles.

Murkowski’s bill would set up a new agency outside of Congress to pick a place for a new temporary nuclear waste site to take the spent fuel right away (well, within 10 years). The big holdup is “consent.” While some local communities or native tribes might want the money or jobs that go along with hosting a nuclear waste site, state politicians have blocked such attempts in Nevada, Utah, and Tennessee.

Senator Angus King (I–Maine) asked perhaps the most probing question of the two-hour hearing. “What if every state says no?” King said. “Where are we then?”

Geoffrey Fettus, senior attorney at the Natural Resources Defense Council, agreed that the stalemate will continue unless Congress changes the process of who gets to decide. “We have a higher chance of states getting to yes if they don’t have to take the entire burden” of all the nuclear waste, Fettus said. Fettus says the burden and the costs should be shared among states, with perhaps several smaller interim disposal sites in different parts of the country rather than a single facility.

West Virginia Democrat Joe Manchin wanted to know if the fuel casks could just stay where they are for awhile, and perhaps the fuel could be recycled. France and Japan, for example, reprocess spent fuel to squeeze out more energy. France then converts the twice-used fuel into glass logs that are awaiting a final burial.

Congress has banned nuclear reprocessing since the Carter administration because of fears that it can be turned into nuclear weapons material. Steven Nesbit, head of nuclear policy for Duke Energy and the American Nuclear Society, which represents nuclear scientists and engineers, says uranium is so cheap and plentiful that it doesn’t make economic sense to reprocess spent fuel.

What about new modular reactors that produce less fuel to begin with? Some startups are developing low-temperature, low-pressure reactors that use molten salt rather than water to cool fuel rods. Advocates say they are safer and cheaper but that they need economic incentives and changes in federal regulations to compete with the old-style nukes.

Nesbit says these new “next-gen nukes” won’t get off the ground until Congress figures out where to put existing waste. “Used nuclear fuel is being stored safely today and poses no immediate danger to the public,” Nesbit said during the hearing.

“However, the lack of progress on a geologic repository has endangered nuclear power’s potential to address our long-term energy and environmental goals,” he added. Developers of advanced reactor developers, Nesbit said, are often asked “What about the waste?” The answer is another order of nuclear casks.

Murkowski closed the hearing by voicing the hope that the political, legal, and technological problems can be solved soon. “Our effort will be to defy the skeptics and change the status quo,” she said.

Meanwhile, the spent fuel keeps piling up. Each year, more than 2,200 metric tons of waste gets racked and stored in nuclear casks, a collection now approaching 100,000 tons nationwide. No doubt the biggest beneficiaries of this stalemate are the companies that make the nuclear dustbins.