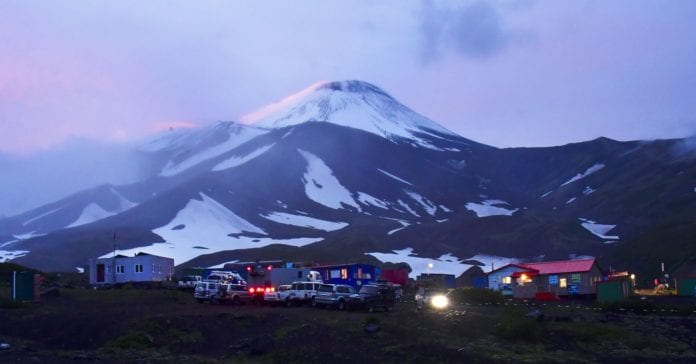 The landscape of Kamchatka Peninsula steams with sulfurous vapor, its 29 active volcanoes forming a hazy backdrop for the region’s herds of reindeer and rivers of salmon. One of the most geologically active places in the world, Kamchatka juts out from the eastern coast of Russia to resemble a larger version of Florida. A process almost like alchemy occurs here: Like a set of roiling cauldrons, Kamchatka’s volcanoes mix unusual combinations of atomic elements to forge minerals that are unlike anything anywhere else in the world.

And in the last few years, researchers have discovered several new minerals on Kamchatka. “They pop up by accident,” says Joël Brugger, a geologist at Monash University in Australia, who helped discover a new mineral on the peninsula called nataliyamalikite in 2017. “You just have to keep your eyes open.” Researchers don’t set out to make these discoveries, usually. Instead, they stumble upon new minerals during their studies of broader geologic processes that might, for example cause rare metals to collect in unusually large concentrations in a specific volcano.

These finds are part of a current boom in mineral discoveries across the planet. On average, geologists and mineral collectors have reported more than 100 new minerals per year since 2009, according to a database affiliated with the International Mineralogical Association. “Given the level of exploration over the last hundred years, you might think that we were running out of minerals to describe,” says Brugger, who has participated in the discovery of 23 new minerals himself. “But the number of discoveries is increasing.” To qualify as new minerals, these materials must be never-before-seen natural combinations of one or more elements in solid form, arranged in a repeating structure. Mined diamond and quartz are both minerals, whereas opal, which does not have a repeating crystal structure, and synthetic gemstones, which aren’t natural, are not. Of the 5,477 known minerals, more than 1,000 were discovered in just the last ten years.

Researchers usually make these discoveries in geologically extreme regions; hence, volcanoes. A handful of new minerals are also found in meteorites every year. But the most bountiful sources of new minerals—two-thirds of the discoveries over the last century—are mines, quarries, and other sites of resource exploration, says geologist Isabel Barton of the University of Arizona. That’s because people tend to want to dig and drill in places with unusual geological makeups in the first place. For example, mines are situated on ore deposits, where rare elements such as gold, silver, or uranium occur in concentrations thousands of times higher than most places in Earth’s crust. “[This creates] the opportunity to form compounds with elements that you usually wouldn’t find,” says Barton. These new compounds can then crystallize into rare minerals.

In order to claim a mineral discovery, you have to find out what atoms make up your specimen, and in what ratios. But perhaps more importantly, you must determine that those atoms are stacked in a unique structure. This step is crucial because sometimes the same atom combinations can form different crystal structures. Calcium carbonate, for example, which consists of one part calcium, one part carbon, and three parts oxygen, can assemble into several different minerals, including calcite and aragonite.

Brugger credits the increase in discoveries to advances in technology that allow geologists to examine increasingly smaller specimens. A century ago, they needed a chunk of relatively pure mineral at least the size of a grain of rice to confirm a discovery. Now, they can easily do it using pieces a thirtieth that size.

The discovery of nataliyamalikite, for one, was made based on a very small sample. First, Brugger’s collaborators in Russia landed a helicopter on Kamchatka’s Avacha Volcano, where they stuck a quartz tube down one of its hot fuming vents to collect some of the sulfurous vapor. The substance that condensed inside the tube, upon analysis, contained an abnormally large amount of thallium. Suspecting that the surroundings might contain unusual thallium compounds, the researchers collected samples of rock near the vent and gave them to Brugger. In Australia, Brugger’s team used a microscope to examine the samples for flecks of potential new minerals. Then, using a tightly focused beam of ions, they cut the candidate grains, smaller than the width of a human hair, out of the rock. It was a delicate process. “If you are a bit too brutal with it, it explodes,” says Brugger. “We ruined a few of the nicer pieces.”

They confirmed the mineral’s structure and makeup using a grain just five microns wide, smaller than a red blood cell. Nataliyamalikite consists of a nearly cubic arrangement of equal parts thallium and iodine atoms, to form thallium iodide crystals. Chemists have actually synthesized thallium iodide for decades, and it’s used in some radiation detectors, says Brugger. But no one had ever seen it in this form in nature.

Scientists use a scanning electron microscope to magnify tiny grains of rock by thousands of times. The largest grains in this sample is only a fraction of a millimeter in size.

The mineral is named after a 38-year-old researcher, Natalja Malik, who collected the first volcanic vapor from the site where they discovered the mineral. But conspicuously, Malik is not an author on the paper describing the discovery. This is because the community follows a tradition in which you do not author a paper about the discovery of a mineral that bears your name. The piece of mineral they analyzed is now stored in the collections of the Museum Victoria in Melbourne, Australia, where it is too imperceptibly small to be on display.

Advances in X-ray technology give researchers a better view of smaller mineral grains, as well. Researchers beam X-rays at their sample and measure how the X-rays bounce off the atoms in the mineral in order to understand the mineral’s structure. To get a 3-D image, they typically have to cut the mineral out of a rock and then X-ray it from multiple directions. But physicist Nobumichi Tamura of Lawrence Berkeley National Lab has helped develop a technique known as X-ray Laue microdiffraction that basically lets scientists see the entire mineral’s structure even if the X-rays are only beaming at it from one side. This means they don’t need to cut the mineral out to study its other angles, which lets them study small grains in meteorites that they don’t want to destroy, says Tamura. In May, he and his colleagues reported the discovery of a mineral called ognitite, originally found in Siberia, by using this method. Their sample, at about 50 microns wide, is still barely visible to the human eye.

Scientists embed specks of rock in a disc of epoxy so that they can aim X-rays at them to study their chemical structure.

These new minerals occur in tiny quantities, but they are more than just collectibles. They’re clues to the extreme geologic processes that form volcanoes and ore deposits. “Nataliyamalikite may not be the most important mineral in the world, but it tells us something really strange is going on at that volcano,” says Brugger. That volcano emits fumes with a thallium concentration at least ten times higher than any other volcanic vapors ever studied. Brugger thinks that long ago, thallium dissolved and concentrated near the sea floor off the coast of Kamchatka. This deep sea thallium would have then fallen into the mantle in the nearby subduction zone, where the boundary of one tectonic plate slips under another. After several million years, the volcano then spewed the thallium out, which crystallized in the form of nataliyamalikite. Using both chemistry experiments and computer simulations, Brugger’s team is trying to figure out if this model of thallium enrichment is consistent with the geology of the rest of the peninsula.

Don’t expect the discovery boom to end anytime soon. “There are, gosh, nearly an uncountable number of possible combinations of elements, in a variety of different structures,” says Barton. “We’ve barely scratched the surface at this point.” You never know what you might find in the tiniest speck of dust.

GizmoCrazed - November 12, 2014 0
For a while now, people have been using the drug Verapamil. It's an effective medicine for high blood pressure and migraines as well as cardiac...

Top 10 Documentaries Of All Time