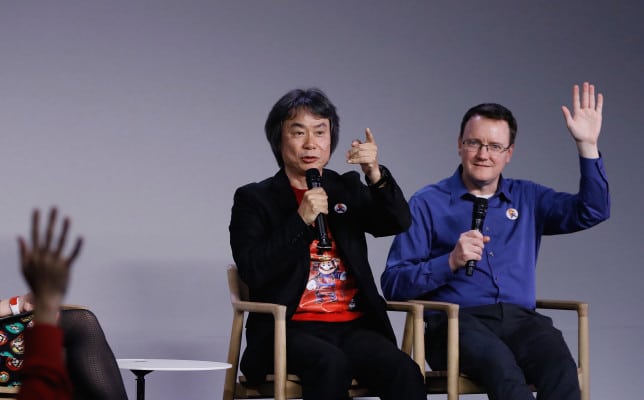 Cloud gaming — however a company chooses to define that — is shaping up to be a big part of the next generation of consoles and other platforms. But Mario creator and Nintendo veteran Shigeru Miyamoto says his company won’t be so quick to jump on the bandwagon.

Speaking to shareholders at Nintendo’s annual general meeting, Miyamoto and other executives addressed a variety of issues, among them what some interpret as a failure to keep up with the state of the industry. Sony and Microsoft (together, amazingly) are about to lock horns with Google, Nvidia, and others in the arena of game streaming, but Nintendo has announced no plans whatsoever regarding the powerful new technology.

As reported by GamesIndustry.biz, Miyamoto was unfazed by this allegation.

“We believe it is important to continue to use these diverse technical environments to make unique entertainment that could only have been made by Nintendo,” he said. “We have not fallen behind with either VR or network services… Because we don’t publicize this until we release a product, it may look like we’re falling behind.”

But although this hinted that Nintendo is working in this direction, Miyamoto didn’t sound convinced that cloud gaming was a home run.

“I think that cloud gaming will become more widespread in the future, but I have no doubt that there will continue to be games that are fun because they are running locally and not on the cloud,” he said.

The Nintendo focus on local multiplayer and complete offline single-player games is certainly emblematic of this point of view. And while Nintendo has been slow to adopt the latest gaming trends, it has shown that it can pull them off very well, indeed like no other, for example with the excellent Splatoon 2 and its constantly evolving seasons and events.

Nintendo President Shuntaro Furukawa said they see how gaming technology is evolving and that it’s important to “keep up with such changes,” but like Miyamoto made no indication that there was anything concrete on the way.

Instead, he indicated (again in true Nintendo style) that the company would reap the benefits of cloud gaming whether or not it took part in the practice.

“if these changes increase the worldwide gaming population, that will just give us more opportunities with our integrated hardware and software development approach to reach people worldwide with the unique entertainment that Nintendo can provide,” he said.

In other words, a rising tide lifts all boats, and if the others did the work to raise the water level, well, that’s their business.

The rumor on everyone’s mind after E3 is whether a new Switch or Switches are on the way. Naturally Furukawa demurred, saying that of course they were aware of speculation, but wouldn’t comment. However, he added: “It would spoil the surprise for consumers and is against the interests of our shareholders, so we are withholding any discussion.”

Of course a new Switch is on the way — that’s about as much as a confirmation anyone would be able to get from Furukawa or the other highly trained executives at Nintendo, even if the new hardware was coming out tomorrow. But at this rate it seems more likely that the new hardware will be timed to pull in buyers around the holidays — which may have the knock-on effect of taking the wind out of Microsoft and Sony’s sails (and sales) when they debut their next-generation consoles next year.