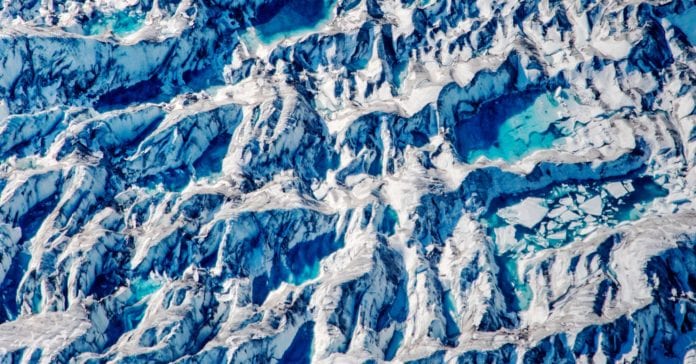 Kenneth Golden, a mathematician at the University of Utah, was perusing images of Arctic sea ice when he noticed a pattern that seemed familiar. When seen from above, the melting sea ice looked like a field of white mottled with dark splotches where the ice had turned to liquid. To Golden it seemed awfully similar to the arrangement of atoms in a magnetic material. There’s no obvious reason for magnets to have a relationship with aerial photos of ice, but the thought stuck with him. More than a decade later, this intuition has finally solidified into a model that could be used to better predict the effects of climate change on sea ice.

Melt ponds are exactly what they sound like: pools of water that form on top of sea ice when the ice’s top layer melts in the spring and summer. The ponds are important because they change the reflectivity of ice. Ice has a high albedo, meaning it reflects most of the sunlight that hits it. Water, however, has a low albedo and absorbs a large portion of sunlight as heat. This produces a feedback loop: As ice melts to form melt ponds, a higher percentage of the ice’s surface absorbs sunlight as heat, which melts even more ice, producing more, larger melt ponds.

Knowing what percentage of the ice’s surface is made of melt ponds is therefore critical to knowing the rate at which Arctic ice is melting, which contributes to the global climate. But because the Arctic is so big, and satellite imaging has limited resolution, measuring the overall area of melt ponds is a hard problem. This is where Golden comes in.

Golden started studying sea ice as a math major at Dartmouth College, even traveling to Antarctica his senior year. He focused his career on more theoretical math, but ten years after his first Antarctic expedition, he got a call from his undergraduate research advisor inviting him to join a large polar research project with the US Navy.

The project was to characterize sea ice from satellite data, and the team needed someone like Golden to create an algorithm that made sense of its optical properties. Over the next few years, Golden went on multiple expeditions to Antarctica and the Arctic with “real sea ice people,” as he put it, researchers who waded ankle- or knee-deep in frigid puddles. He also analyzed images of these melt ponds taken from helicopters, and realized that he recognized in their patterns a ferromagnet model from his physics classes: the Ising model.

Named after Ernst Ising, the model started out as a problem given to Ising by his thesis advisor in the 1920s; now it’s commonly taught in statistical mechanics textbooks and classes.

Magnets work because individual atoms can be thought of as mini-magnets, with north and south poles. The direction of their north pole is called their magnetic moment, and because atoms are quantum in nature, they only have two choices of direction: spin up or spin down. When all the atoms in a piece of material align their magnetic moments, the entire material becomes a magnet; this is the lowest-energy configuration the atoms can take. “Somehow by hanging out with those people in melt ponds, seeing all these images, it struck me that they look like pictures I’d seen of the Ising model,” says Golden.

In that model, magnetic moments are arranged in a grid, where each atom’s moment can only interact with—and potentially change—the moment of a next-door neighbor. This makes patches of same-spin atoms form in the material. As Golden flipped through photos of the melt ponds, he noticed that they interacted with the surrounding ice in much the same way.

“Then I had the idea: instead of spin up and spin down, what about water and ice?” says Golden.

Golden began to play with Ising model simulations out of curiosity, trying to see how he could connect these seemingly disparate ideas. He would start with a random topography of ice, an uneven surface with depressions and hills, and let the ice start melting—meaning, the magnetic spins started flipping. The resulting images of the simulations show islands of dark or light for atoms with spin up or down, water or ice, the edges of their shapes jagged and fractal in nature. He showed the result of one such simulation to a colleague who analyzes images of melt ponds, and the colleague initially thought Golden was showing him one of his own images.

“It doesn’t just make ponds with the correct geometry, but they really look like ponds,” Golden says. To verify his results, Golden compared the distribution of pond areas and perimeters predicted by his model to those observed in nature. They closely matched the distribution of natural melt ponds, and the model was published in New Journal of Physics.

There are limits to the realism of such a simple model, often called a “toy model” by scientists. So Golden plans to add the effects of Arctic winds, which can reshape the edges of the ponds. He can’t account for every facet of the real world, but the length scales in Golden’s model, about one meter, are already much smaller than those used in typical climate models.

“These are big global models,” says Elizabeth Hunke, lead developer for the Los Alamos Sea Ice Model. “We use grids that are more than a kilometer on a side. And these melt ponds are much smaller than those grid cells, so we need some way to describe what fraction of the grid cell is covered by melt ponds.” Golden’s model, she says, “provides a statistical way to do it that represents the essential dynamics.”

Donald Perovich, a geophysicist at Dartmouth College, who’s familiar with Golden’s research, saw an immediate way to connect the model to his own upcoming Arctic work. “This model is helping us inform what kind of observations we’ll make, and then those observations in turn can be used to evaluate this model.”

Besides the applicability, Perovich also finds a deeper value in the model. “I think it’s kind of amazing how math provides a window to understanding the world around us,” he says.

For Golden, who has spent his career at the interface of theory and reality, the idea is a natural one. “Math is the operating system of the sciences,” he says.