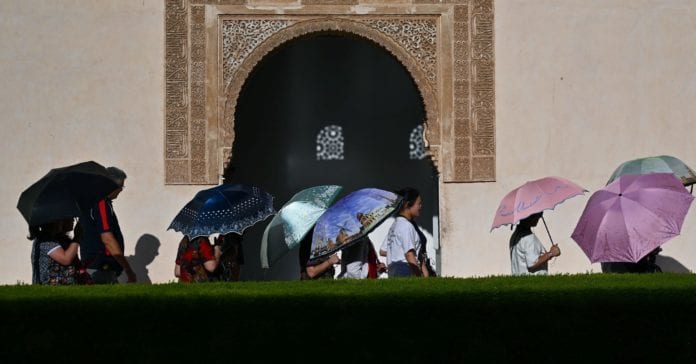 The heat wave that scorched Europe last week felt like a red alert of climate change. Death Valley was cooler than southern France, where temperatures reached a record-breaking 114.6 degrees Fahrenheit.

But as the heat broke and returned to the relatively temperate 80s, another forewarning emerged. Civilizations need to adapt and protect themselves from extreme heat.

More than anyone, the French are aware of just how deadly extreme heat can be. In 2003, a heat wave lasting two weeks killed an estimated 15,000 people in France—and 70,000 throughout Europe. By comparison, this June heat wave lasted just four days. It will take time for authorities to determine the “excess mortality” it caused, but the precautions, including cooling centers and misting machines, seem to have prevented calamity.

Humans have built-in mechanisms to withstand heat and keep their core temperature within just a few degrees of normal, but their bodies need a little help.

Here’s what happens when the summer sun is bearing down and the temperature rises: The heat warms the blood vessels close to your skin, and that warmer blood moves to your core, raising your body temperature. That triggers thermoregulatory processes—your body’s cooling system.

You begin to sweat. “Sweating is our biggest avenue of heat loss,” says Lacy Alexander, a physiologist and kinesiologist at Pennsylvania State University.

But if it’s humid and you are dripping with sweat, your sweat isn’t evaporating and you aren’t getting the cooling you need. That’s when your heart starts to beat faster, trying to pump more blood to your skin to push the warmth building at your core to the surface. Your skin flushes red.

In older adults, even healthy ones, blood vessels may not dilate efficiently. Heat puts extra stress on the heart, which poses a risk for people with chronic health conditions. Some medications, such as diuretics, beta blockers, and antidepressants, make it even harder for your body to cope with heat.

You need to replace your sweat by drinking water or you will become dehydrated. Dehydration is another major stressor as the blood becomes thicker and the heart works even harder to pump it. Add some electrolytes because you’re losing salt, too.

To figure out how much fluid you need, Alexander suggests weighing yourself when you’re cool and hydrated, then weighing yourself again after you’ve been out in hot weather. You need to drink one liter of water for every 2.2 pounds of water weight you lost.

If the temperature is 95 degrees or above, don’t bother with a fan to cool off. It’ll warm you like a convection oven. And don’t drink alcohol. That also makes it more difficult for your body to regulate its core temperature.

Heat exhaustion can come on suddenly, with cramps (a result of dehydration and an electrolyte imbalance), profuse sweating, and a rapid pulse. You might feel lightheaded as your blood pressure drops.

“Those are absolutely red flags,” says Alexander. “Use whatever means possible to cool.”

That could be a cold shower, a dip in the pool, or ice on your head, armpits, and groin (where there are more blood vessels close to the surface of the skin).

If you don’t get relief, extreme heat reaches a dangerous point as your body temperature rises to 103 or above. Heat stroke, or hyperthermia, comes on suddenly in the form of a throbbing headache, rapid pulse, and red, hot, and dry skin. (You’re no longer sweating.) Your body can’t cool itself down anymore, and your body temperature can rise to 106 or higher within 10 or 15 minutes.

You may feel dizzy, nauseous and confused. Without immediate treatment including IV rehydration, you lose consciousness and your organs begin to fail.

About 600 people die in the United States every year of heat-related illness. Heat strikes the vulnerable —the elderly, infants, people with medical conditions—but deaths also occur among athletes and outdoor workers. Two French cyclists died last week, one of whom was competing in a race at the foothills of the Pyrenees. The race was called off as other cyclists also became ill from the heat.

The deadly European heat wave of 2003 is a cautionary tale. The first to die were manual laborers, such as roofers, says Richard Keller, a medical historian at the University of Wisconsin Madison who wrote a book on the extreme event called Fatal Isolation: The Devastating Paris Heat Wave of 2003.

“It’s always easy to rationalize those deaths away, but they may be a harbinger of things to come,” he says.

The next victims were isolated, poor, and elderly Parisians living in apartments without air conditioning. As the heat hit its peak and continued relentlessly, the bodies literally piled up. On August 12, 2003, an estimated 2,200 people died, a spike of mortality after deaths had risen daily for a week.

As he followed the news of the heat wave last week, Keller could only wonder, “You’ve got people dying of heat in June. What’s going to happen in August?”

The US Global Change Research Program’s Climate and Health Assessment projects that climate change will cause thousands or tens of thousands of premature deaths a year by the end of this century. “Heat waves are getting longer and more severe and more frequent. It’s an inescapable conclusion that we’ll see more deaths as the climate changes,” says Juanita Constible, senior advocate for climate and health at the Natural Resources Defense Council.

As the world grows hotter, everything needs to change: people’s behavior, the design of buildings, emergency response systems. Europe’s heat wave shows how urgently that needs to happen.