Forget the Moon—We Should Go to Jupiter’s Idyllic Europa 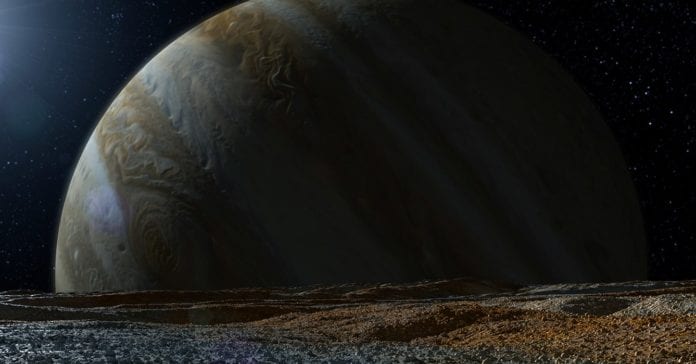 Jupiter’s moon Europa is like the Brigadoon of the solar system: an idyllic moon with an ice-covered ocean that may hide some form of life, even though plans to send a spacecraft there keep receding farther and farther away into the Jovian mists. But that hasn’t killed the dream of sending something, anything, to that corner of the solar system.

NASA had planned to launch the Europa Clipper mission in 2022 to circle Jupiter and pass Europa dozens of times. The idea was to swoop low and check for elements of life by analyzing particles of ice, water, and rock that may be spewing out from the moon’s surface like the spray of a geyser. But the ambitious $2 billion mission has stumbled. Earlier this year, the launch date slipped from 2022 to 2023, and there’s still no rocket to get it there. NASA’s Space Launch System rocket is behind schedule and over budget, according to the Government Accountability Office, while a commercial rocket like the SpaceX Falcon Heavy would take twice as long to reach Europa from Earth as the SLS, which can make the trip in about three years.

NASA is hoping to start building the Europa Clipper spacecraft later this year while both rocket systems continue testing. But a NASA Inspector General report released in May found that space agency officials underestimated both the time and money needed to get the Europa Clipper mission off the ground. Meanwhile, a follow-up mission to be launched two years after—called Europa Lander, which would put some kind of device on the crusty surface—has become less certain. The report concluded that given the current pace of work, that mission could not even consider launching until 2030.

Still, all is not lost for fans of Europa and the possibility of finding something amazing there (even if it’s not an astronaut-munching creature as depicted in the 2013 sci-fi thriller “Europa Report”). Even with the recent budgetary and logistical problems, planetary scientists are pretty excited about building and testing devices to help them uncover life once a mission does reach the planet’s orbit or even its surface. “We are looking at what we will do when we get there,” says Cynthia Phillips, a member of the Europa mission science team at NASA’s Jet Propulsion Laboratory. “We have two sets of arrival dates. We are looking at what trajectories we can use and what kinds of observations we will make once we get there.”

Phillips says Europa is a special place. It is only about the size of our own Moon, but its icy surface hides an ocean 60 miles deep that contains more water than all of Earth’s oceans combined. “It is one of the best places to look for life in the solar system beyond Earth,” she says. Because gravity is weaker on Europa than here, the pressure at the bottom of this super-deep ocean is about the same as the bottom of the Mariana Trench, Earth’s deepest spot at about 36,000 feet.

Europa might even be better than other icy moons because the bottom of its ocean touches a rocky bottom instead of being sandwiched between layers of ice like neighbors Ganymede and Callisto, or Saturn’s Enceladus and Titan. That environment could be an ideal place to find hydrothermal vents that spew minerals into the ocean and perhaps creatures that evolved to harvest them.

Marine scientists at the Woods Hole Oceanographic Institution who explore Earth’s hydrothermal vents have been working with NASA to devise autonomous underwater vehicles that could work in both the bottom of our oceans and on Europa. The agency just announced a $7.6 million, five-year collaboration with WHOI to have space and ocean researchers brainstorm both the science and technology needed for future Europa missions.

Even though a landing on Europa is more than a decade away, some engineers are already testing drills to burrow through the ice sheet to the life-giving ocean below. A Brooklyn-based space company called Honeybee Robotics is planning a plutonium-powered probe with a rotating drill head that would take three years to work its way through the ice. The team now has prototypes of the device, called SLUSH (Search for Life Using a Submersible Heated Drill), drilling through icy cryochambers in the firm’s Pasadena lab. “These technologies are just over the horizon,” said Honeybee’s Tighe Carson at a meeting of the American Geophysical Union held last week in Seattle.

Then there’s the plutonium-powered “TunnelBot,” which can drill and sample subsurface life. That’s being developed by NASA’s Glenn Research Center. There’s also ARCHIMEDES (A Really Cool High Impact Method for Exploring Down into the Europan Subsurface), designed by Austin-based Stone Aerospace, which will use lasers to melt the ice.

These devices have a host of engineering obstacles to overcome in the coming years. They have to carry their own power supply, take samples without damaging any potential life form with a radiation leak, and also transmit data back to Europa’s surface, and then back to scientists on Earth. So while NASA, Blue Origin, SpaceX, and China race to put humans back on the lifeless Moon or faraway Mars, a more exciting (albeit slow-motion) race is underway to reach a tiny moon that may be hiding a big secret.