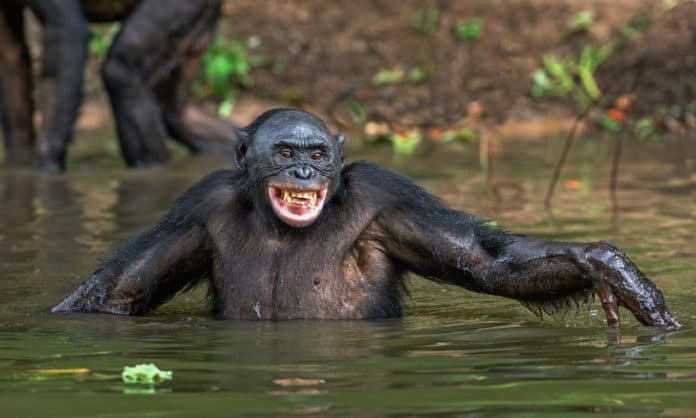 Within the rainforests of Salonga National Park, in the heart of the Democratic Republic of the Congo, bonobos wade through swamps. The slender, three-and-a-half-foot tall apes are searching for rushes and white water lilies. They pluck the herbs from the water and then discard the flowers and leaves. The bonobos are after the soft pith at the base of the leaves and other parts of the plants that grow underwater.

“Our results have implications for our understanding of the immigration of prehistoric human populations into the Congo basin,” primatologist Gottfried Hohmann of Germany’s Max Planck Institute, who led the study, said in a press release.

“Bonobos as a species can be expected to have similar iodine requirements to humans, so our study offers — for the first time — a possible answer on how pre-industrial human migrants may have survived in the Congo basin without artificial supplementation of iodine.”

As part of an ongoing study of feeding behavior in bonobos, Hohmann and colleagues followed the apes and watched what they eat. The researchers collected fruits and herbs the primates ate and then measured the amount of iodine in them. They found rushes and white water lilies contain nearly as much iodine as seaweed, the team reports Monday in the journal BMC Zoology.

The discovery calls into question the idea that the Congo basin lacks adequate iodine sources. “The results of our study suggest that consumption of aquatic herbs from swamps in forest habitat could have contributed to satisfying the iodine requirements of hominin populations used to diets prevalent in coastal environments,” Hohmann said.

Iodine is an essential element. We need it to make thyroid hormones, which control metabolism in adults and are critical for fetal brain development. Not getting enough iodine can lead to fatigue, weight gain and mood swings, as well as other symptoms of hypothyroidism. It can also lead to goiter, where the thyroid gland, a butterfly-shaped organ that sits over the airway, becomes enlarged. Goiters make it hard to breathe and swallow, and can even make you feel like you’re choking. An iodine deficiency during pregnancy is associated with miscarriage, stillbirth, preterm delivery and children with intellectual disabilities.

Today most people get their iodine through diet. In the U.S. and Canada, iodized salt buffers against iodine deficiency. The nutrient was added to salt in the U.S. in 1924, which likely led to a bump in IQ. Eggs, milk and soy beverages also contain high amounts of the element.

But before soy and dairy were common food staples, iodine came from the fruits of the sea – shrimp, tuna, shellfish and seaweed, for example.

Iodine-rich foods abound in coastal areas and researchers think that the evolution of large human brains and advanced cognition is thanks in part to this key nutrient. But it also begs the question of how early hominins living in central Africa could have gotten enough iodine. Now, we may know the answer. Rushes and water lilies may not be thought of as a staple food, but for our ancestors, they might have been essential.