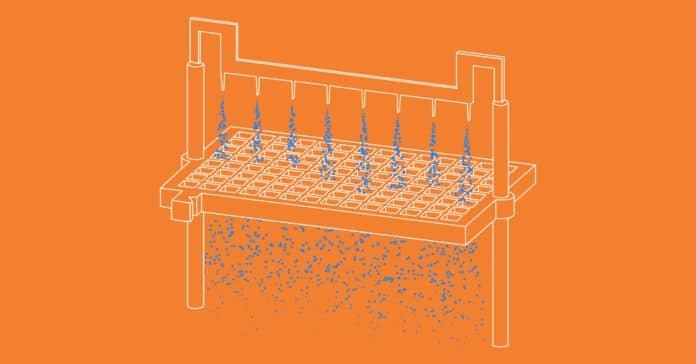 Credit where credit is due: Evolution has invented a galaxy of clever adaptations, from fish that swim up sea cucumber butts and eat their gonads, to parasites that mind-control their hosts in wildly complex ways. But it’s never dreamed up ion propulsion, a fantastical new way to power robots by accelerating ions instead of burning fuel or spinning rotors. The technology is in very early development, but it could lead to machines that fly like nothing that’s come before them.

You may have heard of ion propulsion in the context of spacecraft, but this application is a bit different. Most solar-powered ion spacecraft bombard xenon atoms with electrons, producing positively charged xenon ions that then rush toward a negatively charged grid, which accelerates the ions into space. The resulting thrust is piddling compared to traditional engines, and that’s OK—the spacecraft is floating through the vacuum of space, so the shower of ions accelerate the aircraft bit by bit.

A robot here on Earth, though, has air molecules at its disposal, so it doesn’t have to bother with xenon. In this case (known as electrohydrodynamic thrust), electricity flows into what is essentially a tiny comb made of a conductive metal. Each super-sharp tine throws off ions, which are attracted to a carbon fiber “collector” grid situated below.

“On the way from Point A to Point B, they have multiple collisions with neutral molecules, which is air—nitrogen, oxygen, a little bit of CO2 and water,” says University of Washington mechanical engineer Igor Novosselov, coauthor on a recent preprint paper detailing his team’s system. “So what happens is these ions accelerate the air toward the ground, providing the thrust.”

Easy, right? No xenon to futz with, or wings to flap, or rotors to spin. But the reality is ion propulsion comes with a host of problems that roboticists are just beginning to wrestle with.

One is power. It takes a lot of juice to produce enough ions to generate thrust, so much so that at the moment Novosselov and his colleagues have to tether their robot to a power source. Think of their machine like four separate ion thrusters stuck together, in total measuring an inch long. The idea with having four is that they could modulate the power for each, allowing the flier to steer like a quadcopter does.

But that’s a ways off, because at the moment the four-thruster machine can produce a bit more thrust than it needs to get its weight off the ground. That’s not enough to carry the battery and sensors and other electronics that would make steering and sustained flight possible. (As you can see below, a single tethered thruster subscribes to the chaos method of powered flight.) It’s not even as powerful as the previous UC Berkeley ion thruster it was modeled on.

But this new, weaker thruster has something else going for it: it takes way less time to manufacture than the Berkeley version. “I had the luxury of using extremely thin, precise materials,” says that machine’s creator, mechanical engineer Daniel Drew, now at Stanford. “But I would have to send designs out, wait for them to get mailed back to me, go into the clean room, run a bunch of expensive tools. Then I’d have a wafer full of devices.”

The new thruster uses a laser cutting process, all done right in the lab. “Instead of a few days or weeks to make one of these things, we can do it in less than 30 minutes with raw materials,” says Sawyer Fuller, who co-designed the new thruster.

The team can therefore iterate on their designs far faster, an important consideration when making robots. When designing robot hardware, it can take months to implement a change. Laser cutting, while sacrificing some of the precision Drew enjoyed, speeds up the process significantly.

That means experimenting with differently shaped electrodes made of different materials to improve the power and efficiency of the device, with the end goal of one day setting an ion robot free in the wild. “The question is, can you carry enough battery?” asks Drew. “And I think the answer right now is that it’s just barely on the edge of maybe sort of possible. So the open challenge is how do we improve efficiency of this mechanism?”

The beauty of an ion thruster is that it’s solid-state. Insect-like robots beat mechanical wings, which means they have a lot of moving parts that could fail. Same with the rotors and engines of a quadcopter. But with ion propulsion, so long as you’ve got enough electricity, you’ve got power.

That simplicity also brings lower manufacturing costs, meaning you could deploy these kinds of machines as swarms. “They could look for diseases in agriculture or find gas leaks or explore outer space,” says Fuller. “I’m really excited about sending little flying robots to other planets because they’re so cheap to launch.” Rocket companies, after all, charge by the pound to launch cargo.

Ultimately, this technology need not limit itself to traditional flying machines. Researchers have already developed a bipedal robot that uses rotors to float on two legs, helping balance and save energy when, say, scurrying up a hill. Might ion thrusters give other legged robots a boost? Because such sturdy machines already come with batteries, that might solve the power problem of how to get those ions flowing.