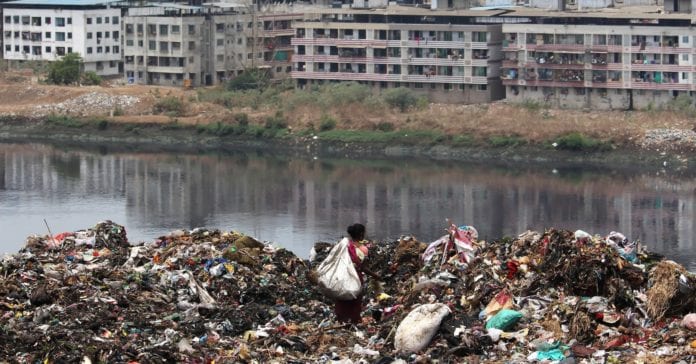 Diseases caused by pollution killed more than 9 million people in 2015, 16 percent of all deaths worldwide. That’s three times more deaths than from AIDS, malaria, and tuberculosis combined, and 15 times more than from wars and other violence. If those figures surprise you, it might be because your first thought is that pollution means dirty air. Or you may think of contaminated water. In reality, pollution is both those things and much more, and only now is the first global effort to assess all forms of it finally calculating those sobering numbers.

Between productivity losses and healthcare, pollution costs some $5 trillion a year, more than 6 percent of global economic output. That’s just from tallying what’s known. The vast majority of the more than 140,000 chemicals and pesticides that have entered the environment since 1950 remain largely untested but could pose a threat. Pollution, as epidemiologists understand it today, is any substance in the air, water, or soil that can harm human health.

These are just a few teeth on the megalodon of a report called The Lancet Commission on Pollution and Health, which was issued in October 2017. It marked the first global assessment of the “neglected stepchild that is pollution,” says Philip Landrigan, a pediatrician and epidemiologist who co-led the commission. Responding to that neglect, the British medical journal The Lancet then assembled a team of 52 that included economists, physicians, nutritionists, a princess of Thailand, and a former president of Mexico. They combined data from major organizations including the Institute for Health Metrics and Evaluation, the US Centers for Disease Control and Prevention, and Google Earth, with hundreds of country- and city-level surveys.

The report is another “my God” moment in Landrigan’s 47 years of plumbing pollution. His early 1970s studies on lead’s effects on children’s IQ prompted the US government to ban leaded gasoline. His research on 9/11 first responders linked toxic dust inhalation with cancer. Not only did the Lancet report find that pollution is “the largest environmental cause of disease and death in the world today,” it also determined that preventing global pollution is a “winnable battle,” and it torpedoed the “old wives’ tale” (Landrigan’s words) that doing so hurts economies. (For example, the EPA has found that since 1970, every dollar spent on air pollution control in the US has brought back about $30 in benefits.) Because investigating air, soil, and water pollution had previously been so piecemeal, the report “surprised many of us who have spent our careers studying pollution,” says Landrigan. “It was clear our work needed to continue and expand.”

That expansion is the Global Observatory on Pollution and Health, which Landrigan directs. A partnership among UN Environment, Boston College, and the Harvard T.H. Chan School of Public Health, the first-of-its-kind observatory opened last September. It will continue to collate the Lancet’s and other pollution data sources in real time, recommend country-specific policies, and conduct research around the world. Its first two studies, to be released later this year, examine ocean pollution’s effects on global health, and human capital losses due to air pollution in India, where at least 140 million people regularly breathe air more than 10 times beyond WHO’s safe limit. “Not addressing the pollution crisis will make it impossible for modern society to survive,” says Landrigan. “It will make people sick. It will shorten people’s lives. It will reduce children’s intelligence so that they can’t properly contribute to society.”

But why is a central command for pollution only now launching? For one, just defining pollution has been a polluted endeavor. From the Latin polluere (“to soil, contaminate”), “pollution” was for centuries strictly associated with social or spiritual defilement. The preferred Middle English definition, for example, was “emission of semen at times other than coitus.” The Industrial Revolution’s smog, sludge, and slurries inspired more scientific usages. But chemists, ecologists, and policymakers with competing interests and limited tools struggled to analyze what they were trying to describe, and resorted to woolly terms like “extraneous matter” with “unfavorable effects” or “foreign substances” that make “unnatural alterations.”

Tellingly, the Cuyahoga River Fire that helped ignite the environmental movement 50 years ago was actually at least the 13th time pollutants had set the river aflame in 100 years. Before 1969, people lacked both the motivation to clean up and the knowledge of what exactly needed cleaning, or why they should bother. A 1978 report from the National Academy of Sciences warned that “attaching a label of ‘pollutant’ to a specific material presumes a considerable knowledge about its impact on the environment; knowledge that, for the most part, is lacking.”

In the decades since, “our ability to measure pollution has advanced by leaps and bounds,” says Landrigan. Satellite imaging allows researchers to “to collect enormous volumes of data in a matter of hours that would’ve taken months or years if you had to rely solely on ground sampling.” The EPA’s classification, first in 1997, of lingering, easily inhaled PM2.5—particulate matter with a diameter of less than 2.5 micrometers, about 3 percent the diameter of a human hair—has made pollution much more quantifiable. And biomonitoring technology can now measure hundreds of chemicals in the human body. Just in the past decade, says Landrigan, “we’ve learned that particulate air pollution causes not just lung disease, but also heart disease and stroke and chronic kidney disease and diabetes and possibly even dementia.”

The Observatory will use the Lancet report’s definition of pollution: an “unwanted, often dangerous, material that is introduced into the Earth’s environment as the result of human activity, that threatens human health, and that harms ecosystems.” Concrete and qualified, but even the first word invites intense political, social, economic, and metaphysical debate.

Pollution concern also lay in the shadows, says Landrigan, because “all the attention was on climate change.” But several recent efforts have raised pollution’s status on the global agenda, with not just the Lancet report but also the work of the Leonardo DiCaprio Foundation and the World Health Organization’s first global conference on air pollution last year.

While pollution and climate change are closely linked, the observatory will stress two differences to bolster urgency. The first distinction is in how it portrays pollution’s murderous potential. Whereas climate change will kill an estimated 250,000 people a year between 2030 and 2050, “pollution is killing millions of people here and now,” says Landrigan. Air pollution alone, which now kills seven million a year, is on pace to double its destruction by 2050. The second is in its approach to solutions. “Pollution is a lot easier to fix than climate change,” he adds. “Pollution could be fixed in 15 or 20 years in most countries around the world. In the US, we’ve seen a 70 percent decline in pollution since the Clean Air Act. … We know what to do, and the tools we use here are ready to be used today throughout the world.” Global warming worsens pollution, but the observatory will first and foremost strategize pollution-specific policies.

Those policies, Landrigan argues, include immediate measures like mandating smokestack scrubbers on all coal-fired plants. “The Trump Administration is walking away from stack scrubbers, and that’s an enormous mistake,” Landrigan says. “That’s not a political statement. That’s a statement based on considerations of human health.” Long-term measures broadly include getting off coal and “creating incentives to speed the transition to generating electricity from renewables.”

Not everyone is as sanguine about pollution’s solvability, and question the observatory’s optimism. “We’re not going from gasoline-powered vehicles to bicycles in the next 20 years,” says Jonathan Samet, an epidemiologist at the Colorado School of Public Health. “And with everything from China to Iceland, you can’t come up with a global standard that works for all.”

“Observatory” is also a bit of a misnomer. Its headquarters isn’t a Captain Planet-like dome of screens displaying real-time pollution crises. For now it’s Landrigan’s sparse office in an academic building in Chestnut Hill, Massachusetts, a stack of research papers, and a whiteboard. And there are many things the observatory cannot see. The Lancet report created a concept called “the pollutome,” the sum of all types of pollution that “have the potential to harm human health.”

The tip of the pollutome iceberg is what is known, pollutants proven to claim nine million lives a year. At the base are little-studied materials, thousands of synthetic chemicals widely used today “that the CDC detects in most people and that have never been tested for toxicity,” says Landrigan.

Figuring out which materials at the base belong at the peak can take years, stealing untold lives along the way. “The biggest problem is going from what we’re exposed to to what are the implications for health?” adds Samet. “I fear it’s a little like smoking. By the time we found out smoking causes lung cancer, we had millions and millions of smokers. Thankfully places like the observatory aim to avoid that.”