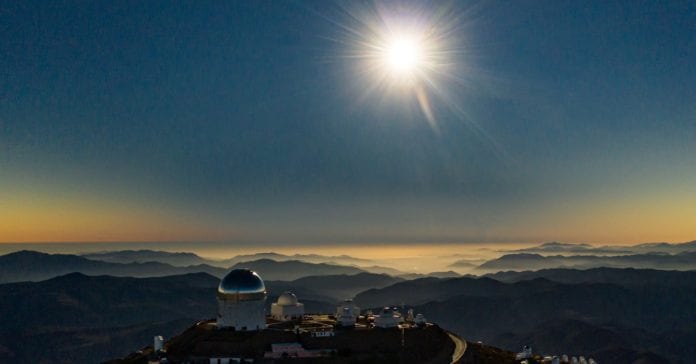 Total solar eclipses are the Super Bowls of astronomy. Teams of scientists develop game plans for capturing data months or years in advance of each one—as do amateur astronomers, working to create their own stellar images or execute their own studies—and it all comes down to a few precious seconds under the Moon’s shadow. When the clock runs out and the sun re-emerges, it’s game over.

The eclipse on Tuesday in Chile and Argentina was a uniquely special experience. Not only did it occur during a so-called solar minimum, when activity in the sun’s 11-year cycle of energy release is at its lowest, thereby reducing the amount of “clutter” for certain kinds of research, it also happened to streak directly above several of the world’s most prominent observatories. Their operators chose the locations in Chile’s Atacama Desert because of the pristine viewing conditions there—conditions that also contributed to incredibly crisp and clear viewing of the eclipse, even if the big telescopes were shuttered for the event to protect their sensitive instruments.

The event didn’t disappoint. I observed with researchers and a small collection of enthusiasts atop Cerro Tololo Inter-American Observatory, operated by the National Optical Astronomy Observatory. Though the planning for the event began years ago, final on-site preparations took place in the days, hours, and minutes leading up to the two minutes of totality on the late afternoon in the southern winter, with the final push arriving after a pre-dawn drive to the mountaintop from La Serena, on the Chilean Coast. Once on site, researchers from around the world set up and aligned their telescopes, calibrated their sensors, and ran power and data cables all around the top of the mountain. When show time arrived, they all announced they were ready for action.

It will take months for their data to be fully analyzed, but afterwards, the scientists were pleased and confident. “The eclipse was great,” said project scientist Paul Bryans, of the University Corporation for Atmospheric Research, whose group is investigating magnetic fields in the sun’s corona, or upper atmosphere. “Cerro Tololo was an awesome place to view it and the weather was perfect. As for the results, it is a little too early to really tell. First look at the data is promising, though. We’ll analyze it properly when we return to Boulder.”

The solar eclipse as seen in Chile.

For everyone else on the mountain, the eclipse was also both riveting and a bit nerve-wracking—at least in the lead-up—especially if you’re working to create images of your own, as I was. I’d thought for months about how many cameras to use, which lenses, and most critically, which settings. My plan was complex in theory, but relatively simple in execution. I would first fly my DJI Mavic Pro 2 drone up and park it—with permission from the observatory—about 1,000 feet behind the telescopes, to capture 4K video of the moon’s shadow passing over the observatory. This would happen about 10 minutes prior to totality, and I’d be able to simply start filming and the drone would automatically hold position.

Then I planned to spend the first 15 seconds of totality shooting through a 400mm f/2.8 Sony lens that the company loaned me for this—it’s a behemoth, and pricey at $12,000, but an astounding piece of gear—before switching to a wide-angle lens for another 15 seconds, hoping to capture the eclipse behind two of the observatory’s domed telescope enclosures. After that, I’d spend a full minute not shooting anything at all, but rather just walking toward the edge of the flattened mountain to enjoy the eclipse and absorb the otherworldly beauty of the event. This is an important element of the eclipse experience: just enjoying it. Many photographers and scientists get so wrapped up in their plans for capturing the eclipse that they forget to take it in themselves, since that awesome—in the truest sense of the word—experience really can’t be replicated through photo or video. You have to see it in person to fully grasp what it is.

Of course, when the countdown timer on my smartphone drew down toward the beginning of totality, all my plans immediately went up in smoke. I realized by looking at the feed from the drone that it wasn’t getting quite the view I’d hoped for, so I switched to photo mode, which has a much wider field of view, and lowered its altitude a bit. As totality began, I squeezed off a few shots manually; then I switched to the big Sony lens. My settings weren’t quite spot on, so I had to shift the shutter-speed dial on the fly to capture a range of exposures, and therefore both the detail of prominences and the brighter corona that was now visible. Fortunately, I could see through the digital viewfinder that I was getting good images, and I switched to the wider-field camera.

I didn’t spend a lot of time worrying about how good those would be, because I quickly realized it would be almost impossible to dial that image in perfectly in the time I had. So I burned off a few shots at different settings, switched lenses, and walked over to the fence at the edge of the mountain.

Researchers and observers set up their instruments to capture the eclipse.

The walk was glorious, with the blocked-out moon hovering in the sky and the sun’s shimmering corona in the background. The coincidence that makes the whole thing possible—namely, the sun and moon having exactly the same apparent size in the sky, thus matching each other perfectly—is an astounding gift from the universe. My walk slowed to a stop as I stood trying to process both the surreal weirdness and the beauty of the spectacle. I picked up my camera, squeezed off a few more half-hearted frames of the eclipse, the landscape below, and the 360-degree sunrise we experienced at the observatory’s 7,000-foot altitude, and then rode out the final few seconds just marveling at the sight.

It ended with a burst of light on the right-hand side of the Moon, and the telescopes and the crowd began swimming in sunlight once again.

My images turned out surprisingly well given the chaos of those two minutes, and I’m grateful for that. I’d also trade all of them for another two minutes in the moon’s shadow. People often talk about the mystical and spiritual side of eclipses, and there’s definitely an emotional impact for a great many observers. But for me it’s simply a rare, special gift from the cosmos—a reminder that the universe is precise and predictable and endlessly surprising, but also beautiful and mysterious. The eclipse is a sublime manifestation of all those qualities, condensed into a two-minute show put on every 18 months, wherever it damn well pleases.

Want to see an eclipse yourself? If you missed the 2017 event in the US—or just want to take another crack at it—start preparing for the 2024 eclipse that will swing from Mexico to Canada, cutting straight across the US from Texas to Maine.