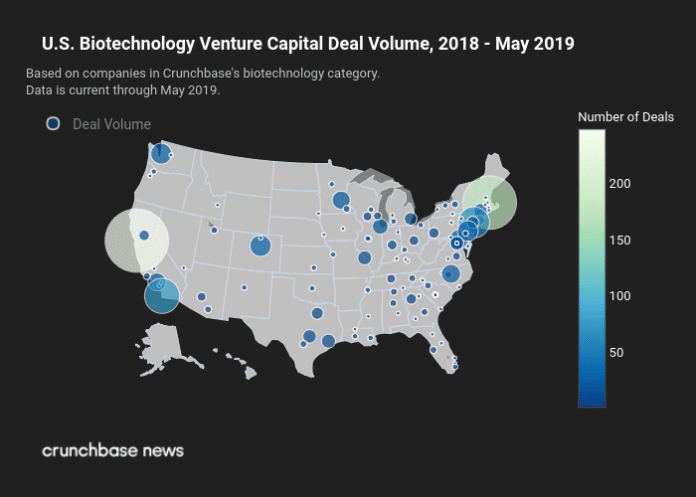 Where are all the biotechnology companies raising these days? We crunched some numbers to arrive at an answer.

Using funding rounds data from Crunchbase, we plotted the count of venture capital funding rounds raised by companies in the fairly expansive biotechnology category in Crunchbase. Click the chart below and you can hover over individual data points to see the number of venture rounds raised in a given metro area between the start of 2018 and late May 2019 (as of publication). Although there are biotechnology companies located throughout the world, we focused here on just the U.S.

Unlike in the software-funding business, where New York City (and its surrounding area) ranks second in overall deal volume, the greater Boston metro area outranks the Big Apple in biotech venture deal volume. The SF Bay Area (which includes both San Francisco and the towns in Silicon Valley north and west of San Jose) outranks Boston in biotech deal volume, but, then again, it’s also a much larger geographic area with a higher density of startups overall.

Crunchbase News recently covered a $120 million round raised by immunotherapy upstart AlloVir. In the software business, a raise that large would be notable; however, in the business of biology, not so much.

Just for reference, the average Series B round raised by U.S. enterprise software startups between 2018 and May 2019 was about $22.7 million. The average Series B for biotech companies from that same time period: just about $40 million on the dot.

Spinning up a cluster of cells at a lab bench is costlier, harder to do and the outcomes of experiments are less certain than the results of implementing a new software framework. Add to that the tremendous cost of performing clinical trials and clearing regulatory hurdles — all before costly sales and marketing campaigns to get treatments in front of doctors and end users — and it’s easy to understand why many biotechnology companies need to raise so much money in the early stages of the startup cycle.