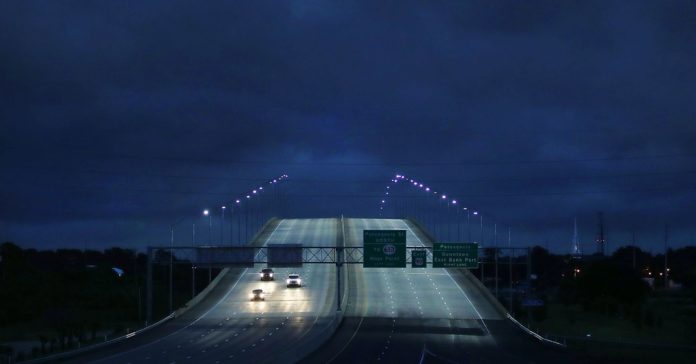 Satellites measure the health of planet Earth by bouncing signals off a patch of ocean, ice sheet, or rainforest and discerning digital vital signs upon their return. But a new cluster of satellites will harness the global positioning system to help predict weather patterns, long-term climate change, and even crippling interference from solar flares.

The same GPS signals you rely on to navigate through rush-hour traffic, find a restaurant, or track your kids can also be used to forecast when hurricanes form in tropical waters. At least that’s the hope of researchers who developed a fleet of six small satellites scheduled to blast off on a SpaceX Falcon Heavy rocket next Monday from Cape Canaveral. The mission is also the latest round in an ongoing contest of sorts between government-sponsored and privately operated weather data collection systems, a competition that many observers hope will result in better forecasts that cost less money.

Known as the Constellation Observing System for Meteorology, Ionosphere and Climate (or COSMIC-2), the mission takes advantage of a weird property of GPS radio signals: They actually bend and slow down slightly as they travel through the atmosphere. This bending doesn’t affect the accuracy of navigation on the ground; it’s only visible from the side by something else in orbit. It’s a bit like what when you dip a pencil in a half-full glass of water and the image refracts slightly through the denser liquid (physics folks know it as Snell’s Law).

The denser the atmosphere, the more the GPS radio wave bends. Once scientists get this information about density, they can figure out atmospheric moisture, pressure, and temperature at one-kilometer intervals. Getting this kind of granular information about what’s happening up and down the atmosphere is key to making weather prediction models more accurate.

“It’s a very elegant technique,” says Bill Schreiner, director of the COSMIC program at the University Corporation for Atmospheric Research in Boulder, Colorado, one of the sponsors of the mission along with the National Oceanic and Atmospheric Administration, the Air Force, and Taiwan’s National Space Organization. “It’s a precise way to measure the atmosphere, and it’s also repeatable.”

Schreiner likens radio occultation, as it’s known, to launching 5,000 additional weather balloons every day—that’s how many more measurements the six COSMIC-2 satellites will be able to gather. The radio occultation system will also collect more information about the equatorial oceans, the spawning ground of the hurricanes and typhoons that batter the world’s coastlines. The other advantage is it can collect information about atmospheric conditions in remote parts of the globe that ships and weather stations can’t reach. The COSMIC-2 satellite also carries a sensor that measures how fast solar particles are traveling, information that will help space weather scientists know when a big solar flare or eruption might be on the way.

Compared to other weather satellites, COSMIC-2 is a relative bargain at a cost of $250 million, half of which was paid by Taiwan, according to Schreiner. “It’s an order of magnitude less expensive,” he says. In comparison, NOAA’s four GOES geostationary weather satellites, the first of which launched in 2016, are costing taxpayers $11 billion and have had a few hiccups in space since then.

Daryl Kleist, a physical scientist at NOAA’s Environmental Modeling Center, says that the new COSMIC-2 satellites will be used to calibrate measurements taken by the GOES system as well as improve long-term climate models. Data from the COSMIC satellites also will help forecasters better track and predict the movement of big atmospheric rivers, the fast-moving air that drives much of the weather in North America.

“We anticipate we will have improved forecasts of such events because of the direct benefit from the COSMIC-2 mission,” Kleist said during a conference call.

With next week’s launch, radio occultation satellites are essentially moving from pilot program to mature technology. The first set of COSMIC satellites, launched in 2006, helped test it out. The solar-charged batteries on all but one of the initial six satellites have run down, and they are no longer producing measurements. The new COSMIC-2 mission should last a minimum of five years, the researchers say. At the same time, rising costs forced NOAA and its Taiwanese partners to cancel an additional set of radio occultation satellites orbiting the poles that was scheduled to launch in 2021. Instead, NOAA is considering buying more weather data, some of it derived using radio occultation, from commercial satellite firms.

The first round of commercial buys in 2017 didn’t go so well, however, and scientists at NOAA and UCAR were not happy with the quality or amount of data produced. Last year, NOAA officials picked two companies for a second-round test, and the agency is still evaluating whether the weather data is good enough to buy, according to UCAR officials. It has’t been used for weather forecasting yet.

Compared to the private satellites, COSMIC-2 satellites are bigger (about three cubic feet compared to 2.5 cubic inches) and heavier (618 pounds versus 11 pounds). They last longer (5 years versus 2 years), have larger antennae, and can collect more information about the Earth’s atmosphere. COSMIC-2 also carries an advanced instrument designed by NASA’s Jet Propulsion Laboratory that can collect atmospheric information closer to the Earth’s surface, a layer up to six miles high called the troposphere, where most clouds and water vapor exist. The ability to collect more precise measurements, as well as to see conditions at different levels of the atmosphere, represents a big improvement over earlier weather satellites.

Of course the private cubesats are cheaper to build and launch. For now, some NOAA officials appear to want to privatize weather collection data at the same time as they are building up a federally funded radio occultation network. Normally the ultimate decider would be the NOAA administrator, but President Trump’s nomination of Barry Myers, former CEO of the private weather forecast firm AccuWeather, has been blocked by the Senate since 2017.