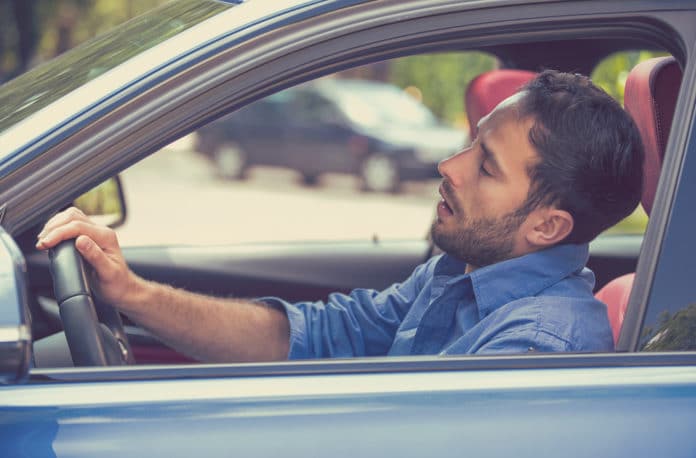 Seconds-long periods of sleep, known as “microsleep,” are common during mundane tasks like driving. While these unintended brain naps can be difficult to control, getting adequate sleep is the key to preventing them. (Credit: pathdoc/Shutterstock)

Have you ever spaced out during a meeting, but been jolted back to reality by the sound of your boss calling your name a few times? If you’ve ever been in this awkward situation, you might have experienced “microsleep.”

This weird state of consciousness is characterized by brief bursts of sleep that happen while a person is awake — often while their eyes are open and they’re either sitting upright, or even performing a task. During microsleep, parts of the brain go offline for a few seconds while the rest of the brain stays awake. It’s sort of like being a zombie for a few brief moments — sans the whole “eating human flesh” part. And usually, people don’t realize it’s happening to them.

Researchers don’t fully understand why certain parts of our brain switch off throughout the day. But they have found the states of sleep and wakefulness aren’t as cut and dry as we might assume. And although fatigue does seem to prime the brain for microsleep, even well-rested people do it — a lot.

In an experiment published in 2012, participants who got a good night’s sleep played what may be the world’s most boring computer game — tracking a moving target on a monitor with a joystick. During the 50-minute test, researchers monitored people’s brain and eye activity. They found that people’s brains really liked sneaking in microsleep during the humdrum computer game. On average, game players experienced a whopping 79 episodes of microsleep in just under an hour, lasting up to six seconds each time.

It may come as no surprise, then, that microsleep is dangerous. When someone is literally half asleep, critical mistakes are more likely. A few seconds in a daze is all it takes for a fatal accident to happen, and, unfortunately, there have been at least few headline-grabbing disasters and tragedies attributed to microsleep.

For instance, a speeding London tram derailed on a sharp left curve in 2016 because the driver fell into microsleep. The accident, which killed seven people and injured 62 more, was the worst train accident that the UK had seen in recent memory. Other disasters tied to microsleep include the 1986 Chernobyl nuclear reactor accident, the 2009 AirFrance Flight 447 crash (killing all 228 people on board) and the 2003 Waterfall train disaster.

Statistically speaking, plane crashes and the like are quite rare. But on a daily basis, most of us still engage in activities that, without paying attention, could send someone to the ER, or even the morgue. A better understanding of microsleep could help keep us safe.

Researchers are still learning about what happens in the brain during microsleep. But a study from 2015 sheds light on the brain mechanisms at work.

In the experiment, people awake for a grueling 22 hours had their brain activity monitored after entering a dark fMRI machine. When participants briefly drifted into microsleep, researchers observed that the brain’s thalamus became less active. This part of the brain regulates the sleep-wake cycle and acts as a sensory gatekeeper, sending incoming information to other parts of the brain for processing.

But surprisingly, during these moments of microsleep, activity in parts of the brain responsible for paying attention ramped up. Activation in these regions are likely our brain’s way of staying awake and preventing us from fully succumbing to the urge to sleep. And it might explain why many people can still perform tasks in auto-pilot mode, even though a key part of their brain is asleep.

For now, the best way to prevent microsleep seems to be simply getting adequate amounts of good-quality sleep. The next best thing would be a nap after a night of tossing and turning, as a NASA study found back in 1994. Sleep-indebted pilots who were allowed to take a 40-minute nap before a test flight only had 34 microsleep episodes in their last 90 minutes of flight, compared to 120 among the non-napping group.

But what if you can’t take a nap? Or if you live by a “I’ll sleep when I’m dead” mantra? Well, you’re in luck. Some inventors are keen to capitalize on our poor sleeping habits. One such product is STEER, a “wearable device that will not let you fall asleep,” according to its Kickstarter campaign. The device purportedly shocks drowsy drivers to keep them awake. It promises “guaranteed protection from sleep” and “active consciousness without microsleep occurrence.”

Or, perhaps, the threat of electric jolts is enough of an incentive to pull over and finally get some rest.