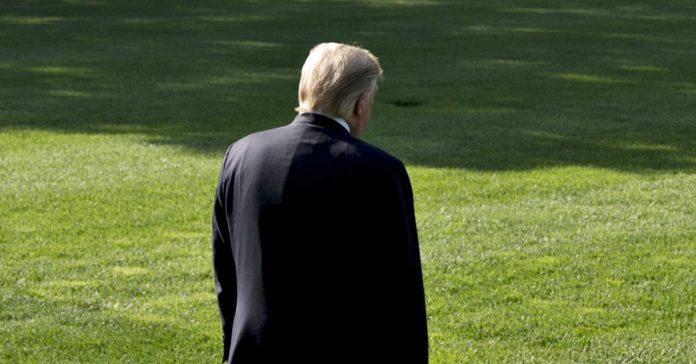 This story originally appeared on HuffPost and is part of the Climate Desk collaboration.

But the administration effort could also backfire, becoming yet another loss for a president whose deregulatory efforts struggle to meet basic legal standards while hardening the resolve of career government researchers trying to uphold the scientific method.

It was no surprise when the Trump administration published the report on Black Friday, the shopping bonanza following Thanksgiving, in what many interpreted as a cynical ploy to bury the report.

Now environmental advocates are questioning officials’ suggestion that the White House might change the methodology of the next report in response to scrutiny the administration didn’t expect to receive over the last one. Admitting he hadn’t yet read the full assessment, Andrew Wheeler, then the acting administrator of the Environmental Protection Agency, accused the 300 scientists who authored the National Climate Assessment of political bias and vowed to “take a look at the modeling” to ensure “more realistic projections.”

That effort appears to be making headway, according to a report published Sunday in The New York Times.

The US Geological Survey’s newly appointed director, James Reilly, a former astronaut and oil geologist, ordered the agency to limit its climate model projections to just 21 years out. That’s meant to set the stage for similar changes to the next National Climate Assessment, which is in its early stages and could be released as soon as 2021.

Myron Ebell, the climate change denier at the right-wing Competitive Enterprise Institute think tank who led Trump’s EPA transition team in 2017, suggested the National Climate Assessment could exclude “worst-case scenario” projections that calculate how much destruction the current rate of warming will wreak.

Keeping the National Climate Assessment from projecting beyond 2040 would violate the Global Change Research Act of 1990, which explicitly requires a report that “analyzes current trends in global change, both human-induced and natural, and projects major trends for the subsequent 25 to 100 years.”

“Any effort to limit climate projections to the year 2040 would be plainly illegal,” said Michael Gerrard, director of Columbia University’s Sabin Center for Climate Change Law.

It’s “particularly ironic” that the Trump administration suggests that “worst-case scenario” forecasts, in which emissions continue increasing relatively unabated, are unrealistic, said Susan Joy Hassol, the former senior science writer on the National Climate Assessments that came out in 2000, 2009, and 2014.

Climate policy was an abstract concept largely limited to the federal sphere 15 years ago, but today, state and local officials are scrambling to enact regulations and laws to adapt to a hotter world and reduce emissions. If the National Climate Assessment, which includes detailed regional projections, becomes less credible, that would be a loss for those policymakers, said Bob Kopp, a climate scientist and policy scholar at Rutgers University.

“It’s valuable at a state and local level, areas that don’t have the resources to do that sort of work on their own,” Kopp said. “California has a pretty intensive climate assessment, but not every state does.”

The White House did not respond to HuffPost’s emailed questions about changes to the next climate assessment.

EPA spokesman James Hewitt defended changing “inaccurate modeling that focuses on worst-case emissions scenarios” and that “does not reflect real-world conditions,” as a general point, but he told HuffPost “there are currently no specific efforts underway at EPA” regarding the National Climate Assessment.

The National Oceanic and Atmospheric Administration, the lead agency on the National Climate Assessment, did not respond to HuffPost’s request for comment but told the Times, “No changes are being considered at this time.” Asked about potential changes to the methodology, Interior Department spokeswoman Molly Block said of the Times story: “The information in that article is incorrect.”

The Trump administration’s push comes as climate change is finally becoming a top concern for voters across the developed world. In March a Gallup poll found that 81 percent of self-described liberals, 77 percent of Democrats, and 53 percent of independents reported feeling “highly worried” about climate change. In April a CNN poll pegged climate change as a top issue for 82 percent of registered Democrats planning to vote in the 2020 presidential primary. In Europe, Spain’s Socialist Party won reelection last month with a Green New Deal as its platform issue. And Green parties surged in last weekend’s European Parliament elections.

There’s growing evidence that global warming is accelerating toward cataclysm. Global emissions hit a new high in 2018 even as coal plants continued closing. Earlier this month, researchers at the Mauna Loa Observatory in Hawaii recorded carbon dioxide concentrations in the atmosphere passing 415 parts per million for the first time in at least 800,000 years. Methane, a more potent but shorter-lasting greenhouse gas than CO2, surged to a new record level in 2018, according to new data NOAA released last week, now accounting, by the Financial Times’ estimate, for one-sixth of the atmosphere’s warming capacity.

Escalating fears about natural disasters and their cost have made global warming tangible just as the Green New Deal movement has reframed the climate policy debate as one of sweeping economic reforms and government-backed clean-energy jobs rather than regressive tax changes to make pollution more expensive. In the United States, where the Republican Party stands alone as one of the world’s only major political parties to make rejecting climate science part of its mainstream platform, outright denialism is losing appeal as GOP lawmakers rush to propose credible alternatives to the Green New Deal.

Yet that’s done little to sway a president who’s made taunting scientists a mainstay of his prolific Twitter presence. During his first year in office, Trump proposed axing nearly 80 environmental regulations. The administration put forward a rule last year that would bar the EPA from using vast swaths of existing public health research when writing regulations. Despite widespread condemnation, the agency appears to be putting the principles into action, readying changes to the way it calculates deaths from air pollution in a move the Times said wipes “thousands” of fatalities “off the books.”

That change may not hold up in court. Federal judges have ruled against the Trump administration at least 63 times over the past two years, The Washington Post determined in March. Two-thirds of those cases accused the Trump White House of violating the Administrative Procedure Act, the 73-year-old law that sets standards for agency rule-making to provide consistency between administrations. Federal courts have overturned 93 percent of the Trump administration’s deregulatory proposals over the past two years, according to a review of a database from New York University’s Institute for Policy Integrity. Of those, more than half were environmental and climate rules.

The Trump administration could try to illegally tweak the National Climate Assessment given the low bar set by the Administrative Procedure Act, said Denise Grab, an attorney and regional director at the Institute for Policy Integrity.

“It’s not a terribly hard standard to meet; any agency that’s behaving somewhat rationally should be able to make it,” Grab said. “Yet even following that extremely deferential standard, the Trump administration is completely failing.”

To some, the legal imbroglio may be an end unto itself.

“What is pretty clear is the tactic and strategy here,” said Rachel Cleetus, climate and energy policy director at the nonprofit Union of Concerned Scientists. “They’re trying to delay and obfuscate, and it’s all to serve the purposes of the fossil fuel industry.”

GizmoCrazed - March 7, 2019 0
Leica is a brand I respect and appreciate but don’t support. Or rather, can’t, because I’m not fabulously rich. But if I did have...