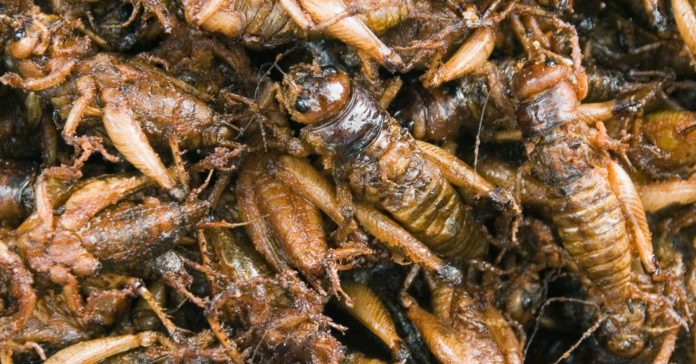 Depending on whom you ask, the future of food is plant-based burgers that bleed. Or we should all be eating insects instead of cows. Or we need to grow hamburgers in the lab by culturing cells, thus avoiding having to feed and hydrate legions of cows burping up greenhouse gases.

Or how about we mash these up a bit: What if, in the lab, we grew not beef but insect meat? According to a group of researchers at Tufts, culturing bugs could be easier and more efficient than culturing cow cells. To be clear, this is still theoretical work. But who knows—maybe one day you’ll be grilling up lab-grown cricket burger. Sans legs and wings, of course.

On paper, cultivating meat in the lab is simple: Just get cells to grow, as they do inside animals. In practice, though, it’s wildly difficult. A big part of the problem is the nutrients you need to feed those cells, be they chicken or fish or beef. This typically comes from very expensive serums made from animal blood (an ounce of fish serum costs $850), which makes scaling up the lab-grown meat industry difficult. Serums aside, it’s hard to get cells to grow outside of the body—you need the right temperature and amount of oxygen, for example. In essence, you’re replicating the environment in an animal’s body, without the animal.

The cells of invertebrates like insects, though, are quite different from vertebrates. “Insect cells generally are so hardy you can’t kill them,” says Tufts biomedical engineer David Kaplan, who coauthored a recent paper on culturing insect tissue. “That implies you can sort of not have stringent culture conditions to get them to grow.”

Why are insect cells so different from mammalian cells? “That I don’t have a good answer for, because I’m not sure anybody does,” says Kaplan. The sort of hand-wavey answer, he says, comes down to evolutionary biology: Mammals have to constantly adjust to temperature changes, often with difficulty, whereas insects are more resilient to changing conditions. “I think it’s a reflection of how they evolved to exist in niches that are exposed to ranges of temperatures, ranges of salinity, pH, you name it. And yet they survive and thrive, whereas we are environmentally narrowed to survive in very defined temperature ranges.”

The presumption, then, is that because insect metabolism is relatively simple, you can grow the cells in the lab without necessarily using all the micronutrients from serums. That theoretically makes cultured insect meat more scalable, both because you cut out the insane costs of serums, and because the process is inherently simpler: When you grow insect cells in the lab they easily “immortalize,” or propagate in perpetuity.

“It just seems to be a natural process with these cells,” says Kaplan. “They’re hardy in cultivation, but they’re also hardy in terms of maintaining stocks and keeping them propagating.” Which means it’d be easy to ship these stocks to other facilities to begin growing their own populations of insect cells.

How does Kaplan know insect cells grow so easily in the lab? Because he’s not only cultivated them, he’s fashioned robots out of them. Well, simplistic components of robots—the actuators, or motors, that power them. “The key is to grow muscle cells from insects in very aligned, organized bundles, if you will,” Kaplan says. Then, using electricity, he can trigger these bundles of insect cells to contract or expand, like muscles.

But say you want to grow insect cells for food, not robots. What does the finished product look like? Companies growing cow cells in the lab are at the moment limited to ground beef. This formless meat product doesn’t have the complicated connective tissues of something like a steak.

But there’s no such thing as a cricket steak, or even a cricket burger. So somehow that lab-grown cricket meat will have to acquire some structure. “You need a scaffold just to give form and function,” says Kaplan. With some kind of additional scaffolding, insect meat might also gain a more desirable texture. In their paper, Kaplan and his colleagues point to mushroom chitosan, a fibrous material found in the cell wall of mushrooms, as one potential scaffolding material.

Then again, maybe you don’t need much structure at all. In Madagascar, for instance, folks are raising crickets to turn into a powder, which can be added to foods to supercharge them with protein. Cultured insect meat might serve a similar role, which would sidestep the challenges of marketing a lab-grown bug burger to the public.

Still, people are unlikely to forget that the creatures had six legs. And they might hold onto romantic notions of meat coming from “grass-fed” or “pasture-raised” animals, as opposed to originating in some lab. “I don’t understand what the market is for cell-based insect meat—that seems like a lot of things people hate all rolled into one package,” says Mike Selden, CEO of Finless Foods, which is developing lab-grown fish. “But it’s not impossible.”

And consider this: Crustaceans like lobster and crab are also invertebrates, and may similarly grow well in the lab. “Some of the technology that’s used to imitate crustacean texture is already there in the food science world,” Selden says. It’s called surimi, and it’s the culinary magic that makes crab sticks possible. “If you can grow a bunch of crab cells and make them into surimi, a lot of the work has been done for you, essentially.”

For now at least, cultured insect cells is just an idea, the merging of the young world of cultured meat and a burgeoning interest in insect-based protein. But if it turns out that companies can grow insect meat without a serum, “that’s a huge advantage early on,” says Elliot Swartz, a senior scientist with The Good Food Institute, which promotes the lab-grown meat industry. “Because you don’t really have to invest the time and resources and the capital to develop an optimized serum-free formulation.”

What it amounts for the environment, however, remains a glaring unknown. A study earlier this year suggested that growing beef in the lab instead of the field would cut down on methane emissions from cow burps, but powering the facilities could add significant CO2 emissions. Methane is a far more powerful greenhouse gas, but it disappears from the atmosphere after about 12 years, while CO2 sticks around for thousands. Long-term, then, lab-grown meat could do serious environmental damage—given, that is, these facilities aren’t powered by renewable energy. It’s almost inevitable they will be, of course, given their pitch of environmental friendliness.

So while insect cells appear to be more efficient to cultivate, you’d need something called a life cycle analysis to prove that, which charts in detail what impact such an industry would have. “Not just the cells and the tissues, but also all the ancillary energy requirements—water use, land use,” says Kaplan. “It’s not a trivial undertaking.”

And so we crawl slowly toward the future of food.