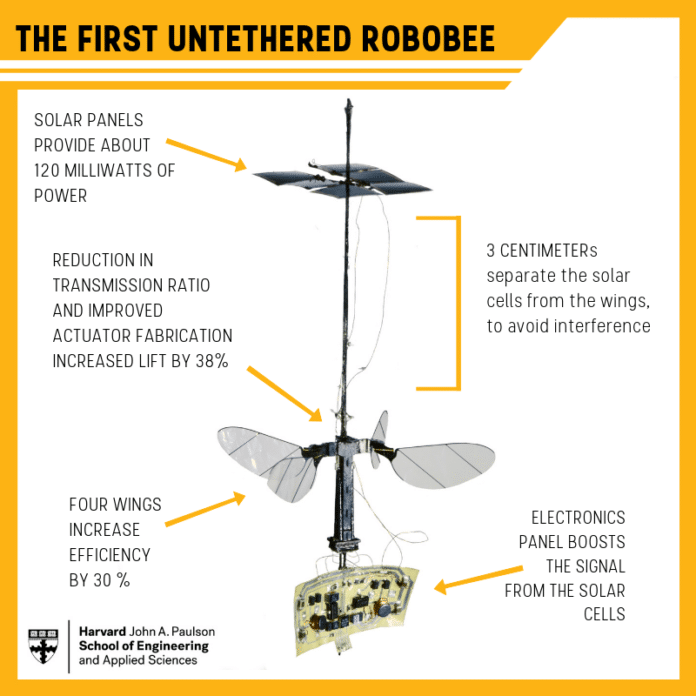 We’ve seen Harvard’s Robobee flying robot evolve for years: After first learning to fly, it learned to swim in 2015, then to jump out of the water again in 2017 — and now it has another trick up its non-existent sleeve. The Robobee X-Wing can fly using only the power it collects from light hitting its solar cells, making it possible to stay in the air indefinitely.

Achieving flight at this scale is extremely hard. You might think that being small, it would be easy to take off and maintain flight, like an insect does. But self-powered flight actually gets much harder the smaller, which puts insects among the most bafflingly marvelous feats of engineering we have encountered in nature.

Oh, it’s easy enough to fly when you have a wire feeding you electricity to power a pair of tiny wings — and that’s how the Robobee and others flied before. It’s only very recently that researchers have accomplished meaningful flight using on-board power or, in one case, a laser zapping an attached solar panel.

The new Robobee X-Wing (named for its 4-wing architecture) achieves a new milestone with the ability to fly with no battery and no laser — only plain full-spectrum light coming from above. Brighter than sunlight, to be fair — but close to real-world conditions.

The team at Harvard’s Microrobotics Laboratory accomplished this by making the power conversion and wing mechanical systems incredibly lightweight — the whole thing weighs about a quarter of a gram, or about half a paper clip. Its power consumption is likewise lilliputian:

Consuming only 110–120 milliwatts of power, the system matches the thrust efficiency of similarly sized insects such as bees. This insect-scale aerial vehicle is the lightest thus far to achieve sustained untethered flight (as opposed to impulsive jumping or liftoff).

That last bit is some shade thrown at its competitors, which by nature can’t quite achieve “sustained untethered flight,” though what constitutes that isn’t exactly clear. After all, this Dutch flapping flyer can go a kilometer on battery power. If that isn’t sustained, I don’t know what is.

In the video of the Robobee you can see that when it is activated, it shoots up like a bottle rocket. One thing they don’t really have space for on the robot’s little body (yet) is sophisticated flight control electronics and power storage that could let it use only the energy it needs, flapping in place.

That’s probably the next step for the team, and it’s a non-trivial one: adding weight and new systems completely changes the device’s flight profile. But give them a few months or a year and this thing will be hovering like a real dragonfly.

The Robobee X-Wing is exhaustively described in a paper published in the journal Nature.