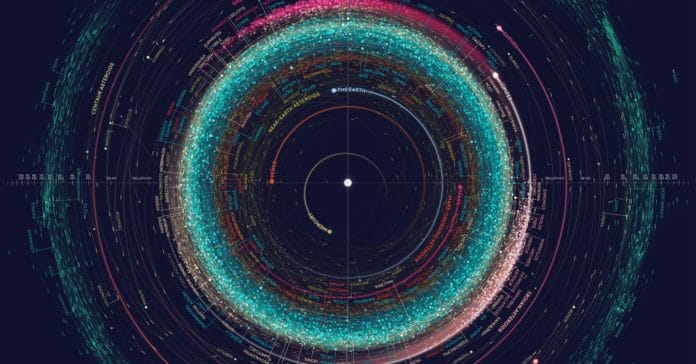 Eleanor Lutz has a running list of scientific topics she wants to find data sets for. It’s not her job exactly. A biologist with wide-ranging curiosity, Lutz moonlights as a data-driven illustrator who transforms public data sets into arrestingly beautiful visual objects. She’s made digital trading cards of animated viruses (who knew HPV could be so mesmerizing), and infographics on plant species that have evolved to withstand forest fires.

Atlas of Space, her latest project, is all about the solar system. She plumbed the depths of publicly available data sets from agencies like NASA and the US Geological Survey and used them to create vivid maps of constellations, asteroids, and planets. In one image, luminescent bands of fuschia and aquamarine asteroids swirl around the bright, white point of the sun. In another, Earth seems to pulsate as an animation of arctic sea ice shows how it extends down the continents during the winter and then retracts back to the poles in summer. “I really like that all this data is accessible, but it’s very difficult to visualize,” she says. “It’s really awesome science, and I wanted everyone to be able to see that in a way that makes sense.”

Over the next several weeks, she is releasing each image along with a detailed tutorial on how to recreate it. A biology graduate student at the University of Washington, Lutz originally learned Python to help with her lab work, but that didn’t quite cover all the complicated techniques she needs to produce these images. “Because I’m not traditionally trained as a designer, and I’m not really an astronomer, I learned a lot from online tutorials myself,” she says. For her, sharing what she discovered is a way to help make the knowledge stick—and a way to pay it forward.

You can find Atlas of Space, along with Lutz’s other projects, on her design blog TableTop Whale.