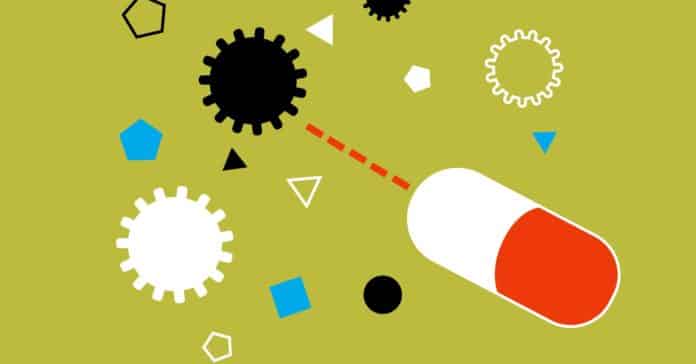 This story is part of a series on how we clean—from organizing your house to washing your tuchus.

Of all the existential intergalactic threats ever faced by the crew of the starship Enterprise, perhaps none burns more brightly in the minds of classic Star Trek fans than the gaping, antiproton-beam-backlit maw of the Planet Killer. What could be more memorable, after all, than a miles-long, barrel-shaped machine that prowls through space, inhaling planets through one end and chopping them into rubble to be expelled out the other? Now imagine a microscopic version of that and you’ve got yourself a proteasome, one of the most essential molecular machines inside the human body. Instead of breaking down planets though, it hacks apart proteins.

This tubular apparatus of orderly extermination is essentially a cellular garbage disposal, keeping thousands of damaged, misfolded, or otherwise obsolete proteins from piling up inside your cells like so much interplanetary space junk. Over the past two decades, as biochemists began figuring out how this natural trash-clearing system works, some discovered ways to trick it into terminating nearly any protein they wanted.

Today, investors are pouring billions of dollars into what many hope will be the next generation of blockbuster drugs based on programmable proteasomes. In the last few years, nearly every major pharmaceutical firm has begun negotiating deals with startups specializing in targeted protein degradation—as the rapidly expanding drug strategy is known—or spinning up their own internal development programs. Whereas small molecules like ibuprofen and benadryl gum up proteins, and Crispr knocks out the genes that make proteins, protein degraders offer a radical new way to selectively reach into cells and attack a whole host of historically difficult-to-treat diseases caused by misbehaving molecules, from Alzheimer’s to Parkinson’s to many types of cancer.

At least, theoretically. The key is getting a protein of interest labeled for disposal. That’s the job of a special enzyme called a ubiquitin ligase; anything it slaps a chemical tag on gets hauled off to a proteasome and, poof, no more protein. Getting it to tag a specific protein is simply a matter of designing a molecule that can tether the ligase and the protein together. The idea’s been around since the late ’90s, but until recently, most demonstrations had taken place only in academic labs. That’s because most pharmaceutical companies assumed these proteasome-recruiting molecules, which are quite large and ungainly by drug standards, would never be able to slip across the membranes of intestinal cells and get into the bloodstream. In other words, the biology worked, but the chemistry was no good.

But a small Connecticut-based biotech company called Arvinas is changing that assumption. Founded in 2013 by Yale biochemist Craig Crews, one of the scientists who pioneered the now-patented protein disappearing act, Arvinas spent its first few years chemically tweaking its molecules to make them work inside the human body. In March, it began recruiting patients for the first-ever clinical trial of protein degraders. The company will test out the method on prostate cancer patients first, with another trial starting later this year for breast cancer. “The concept is incredibly compelling, but the big question has always been, can you get these large molecules to behave well?” says Tim Shannon, a partner at Canaan Partners and an early investor in Arvinas who served as its CEO until 2015. “That’s what we’re about to find out. Because if you can create one of these successfully, then you can do more.”

The idea behind the company’s first candidate is that it degrades the androgen receptor, which grabs onto testosterone, a hormone that has been shown to fuel prostate cancer. Hormone therapies given to treat prostate cancer or prevent it from coming back after surgery or chemo block those receptors, cutting off the supply of testosterone to cancer cells and shrinking tumors. But after a while, these cells adapt, sometimes mutating their receptors or adding more to their surfaces so they can suck up every bit of testosterone available, essentially evolving resistance to the treatments. Same thing for some types of breast cancer, but in that case estrogen is the hormone that adds fuel to the fire. Arvinas hopes that by disappearing the receptors to these hormones down the molecular doomsday machine rather than just blocking them, it can help people who’ve become resistant to existing hormone therapies.

Protein-degrading isn’t a cure-all, though. While most of these molecules have shown good specificity—they’re not out tagging innocent bystander-proteins—there’s currently no way to tailor their trash-flagging in different parts of the body. Just like small-molecule drugs, protein-degraders will impact not just receptors in, say, tumors, but anywhere cells are displaying them, including in healthy tissues. For proteins that drugs have never been able to target before, the potential side effects are completely unknown. At least where androgen and estrogen receptors are concerned, researchers know what to expect.

And that’s more or less the main goal of these first human tests—to really just see if protein degraders work as expected in a well-understood system. Arvinas expects to have that data in hand by early next year. If successful, more experimental trials will follow, though so far no one’s saying much about which diseases they plan to treat. Last month, another startup called Kymera Therapeutics signed a $70 million, four-year agreement with Vertex Pharmaceuticals to accelerate the push to get its still-secret protein degraders into the clinic. Novartis is reported to have its own hush-hush candidate on track for a trial later this year. And C4 Therapeutics, a small Boston biotech, signed a $415 million deal with Biogen in January to develop treatments for neurological diseases, but it has yet to disclose specifics. Arvinas has its own licensing agreement with Genentech, worth $650 million, to collaborate on additional treatments. They’re lining up to tame a host of alien proteins, to boldly go where no drug has gone before.

More Stories on How We Clean