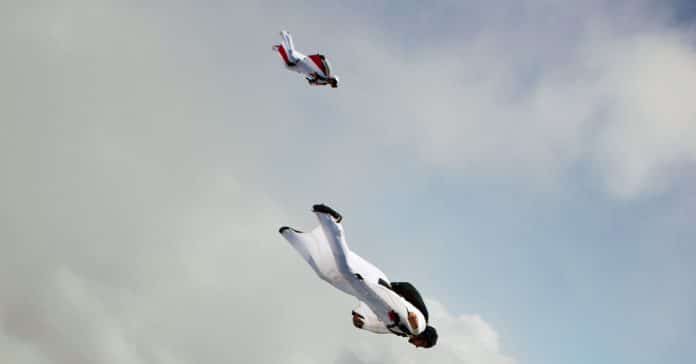 Check out this awesome video. Two skydivers are traveling downward and passing a small ball back and forth. Pretty cool, right? But what’s going on here and how can you get something like this to work? Does it have to be a special ball? Let’s get to the physics of this cool trick.

You may have heard something about all objects falling with the same constant acceleration. There was even that story of Galileo dropping two spheres of different masses off the leaning tower of Pisa. Not sure if it’s true, but his point was to show that both the gravitational force and the acceleration of an object depend on mass. When you put these two ideas together, the mass cancels. Any object dropped on the surface of Earth will fall and speed up with an acceleration of about 9.8 meters per second squared—except when it doesn’t. Yes, this idea is only approximately true.

You probably already have some experience with the air resistance force. If you stick your hand out the window of a moving car, you can feel the air pushing against you. As a basic model, this air resistance force has the following properties (this is just a model):

As an equation, the magnitude of this force looks like this:

Don’t worry about the factor of 1/2 or the fact that the velocity is squared. Those are just properties of this force model that we will use to look at this falling ball.

Eventually, the velocity of the ball will increase to the point where the downward gravitational force and the upward air resistance force are equal. With equal forces in opposite directions, the net force on the ball is zero and it stops speeding up. It falls but at a constant velocity. We call this “terminal velocity” since it stops speeding up.

Suppose I want to calculate the terminal velocity of a falling ball. I can do this by setting the gravitational force (mg where m is the mass and g is the gravitational field) equal to the air resistance force and then solving for the velocity. Here is what that looks like. (Math warning.)

OK, let’s get some terminal velocity values for different balls. First, there are two values that shouldn’t really change much. There is the density of air (ρ), with a value of around 1.2 kg/m3, and there is the drag coefficient (*C) for a sphere, with a value of about 0.47. But after that, the terminal velocity depends on both the mass and the radius, since the cross-sectional area of a sphere is proportional to the square of the radius.

I’m going to now think of all the different balls I could drop. Basketball, baseball, soccer ball. You name it. I can find the mass and the radius and use that to calculate the terminal velocity. What about the terminal velocity of a skydiver? The terminal speed depends on the size of the human and the free fall position, but a rough estimate is 120 mph (54 m/s).

Here is a chart of the terminal velocity for different balls. I looked up the mass and radius on Wikipedia (of course).

There you have it. None of these balls would work for tossing during a skydive. Actually, it’s even worse than this. In the video above showing the two skydivers, they are in a “sitting” position. I suspect that this change in position from the normal free fall position would increase their terminal velocity to perhaps 65 m/s or something. These balls would just not keep up with the falling humans.

Honestly, I thought the golf ball would do the trick. It has a fairly high density compared to the other balls—the problem, however, is that air drag depends on the square of the radius, but the weight depends on the radius cubed. It’s got a nice density, but it’s just too darn small to fall fast enough.

Finally, let’s go back to this skydiving ball. It’s actually a product you can buy—it’s called the Vladiball. Apparently, this is a weighted ball so that it has a skydiver-like terminal velocity. But wait! It carries extra weight that is released when the ball reaches an altitude of 1,800 feet (or so).

OK, but I don’t want to talk about the specifications of the vladiball. Instead, let’s consider what it would be like to pass this ball back and forth. Since the air resistance force balances with the gravitational force, would it just be like a frictionless puck on a flat surface? It might seem that way, but no. It would still have a significant drag force in the horizontal direction. Why? The short answer is because the air drag force depends on the square of the velocity. Let me show you with a diagram.

Suppose that a ball is falling at terminal velocity and then tossed horizontally. So, it’s mostly moving down, but also a little to the side. In that case, there are still just two forces on the ball. Here is a diagram.

It turns out that the horizontal component of the air drag doesn’t just depend on the horizontal velocity. No, it depends on the total velocity, since the air force has a velocity squared term in it. This means that a fast-falling ball, even at terminal velocity, will still have a significant horizontal drag force on it when you toss it to another skydiver. But that just means you might have to push it a little harder to get the ball over to your friend. It should still be a fun game—just don’t drop that ball.