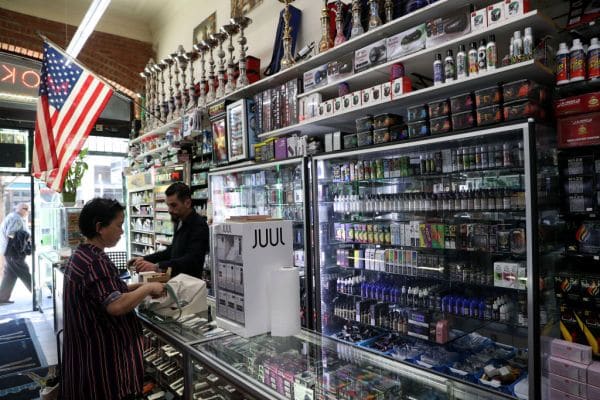 San Francisco’s Board of Supervisors unanimously approved an ordinance today that prohibits the sale of e-cigarettes within the city. If signed into law, the new legislation would amend the city’s health code, making it illegal for stores to sell vaping products or for online retailers to ship them to San Francisco addresses, which means it would become the first city to enact such a ban.

San Francisco City Attorney Dennis Herrera, who co-sponsored the ban on sales, told Bloomberg that products will be allowed to be sold in the city again if they receive approval from the Food and Drug Administration. The FDA oversees e-cigarettes, but will not require vape companies to submit for approval until 2022.

The ordinance is now waiting to be signed by Mayor London Breed, who has 10 days to review the legislation. If she signs it, the ban goes into place in seven months. Juul, the San Francisco-based company that captured 75 percent of the e-cigarette market last year, according to Nielsen, is already fighting back. The company, which has been blamed for lowering the barrier to nicotine addiction for underage users, told Bloomberg that it has already collected enough signatures to add a ballot measure that would allow San Francisco stores to keep selling e-cigarettes to customers over 21 if it passed by voters in November.

The ordinance passed today cites the increase in vaping among underage users as a key reason for the ban. “According to the Centers for Disease Control and Prevention (“CDC”), the number of middle and high school students who reported being current users of tobacco products increased 36%—from 3.6 million to 4.9 million students—between 2017 and 2018,” the proposal said. “This dramatic increase, which has erased past progress in reducing youth tobacco use, is directly attributable to a nationwide surge in e-cigarette use by adolescents.”

Though it markets itself as a device to help adult smokers who want to stop using cigarettes, Juul has been blamed for getting more teens hooked on nicotine because its discreet e-cigarettes are carried in many retail stores, including convenience stores and easy to hide. Juul pods all contain nicotine, unlike other vaping companies that make liquids with lower levels of nicotine or none at all. As cigarette sales in the U.S. are decreasing, cigarette makers have turned to vaping, creating their own products or investing in e-cigarette companies. Altria Group, the tobacco products conglomerate that includes Philip Morris, bought a 35 percent stake in Juul last year, giving the company a valuation of $38 billion.

On Tuesday, San Francisco also passed a separate ordinance that would ban the sale, manufacturing and distribution of e-cigarettes on city property. Though the ordinance does not mention Juul by name, the company’s headquarters are at Pier 70 in office space leased from the city. Juul would be able to stay in Pier 70 if the ordinance passes, since the ordinance would not apply retroactively, but it has already purchased its own office tower in downtown San Francisco.

A Juul spokesperson told Bloomberg that it is committed to preventing the sale of its products to customers under 21, but that “this full prohibition will drive former adult smokers who successfully switched to vapor products back to deadly cigarettes, deny the opportunity to switch for current adult smokers and create a thriving black market instead of addressing the actual causes of underage access and use.”

Juul is not the only business that will be affected by the ban, with many stores in San Francisco worrying about the ordinance’s impact on their sales if it is passed. Moe Mohomed, who works at a smoke shop in the Mission District, told Mission Local that last year’s ban on flavored e-cigarettes caused profits to fall by about 30 to 50 percent. According to the news site, 800 businesses in San Francisco sell e-cigarettes.