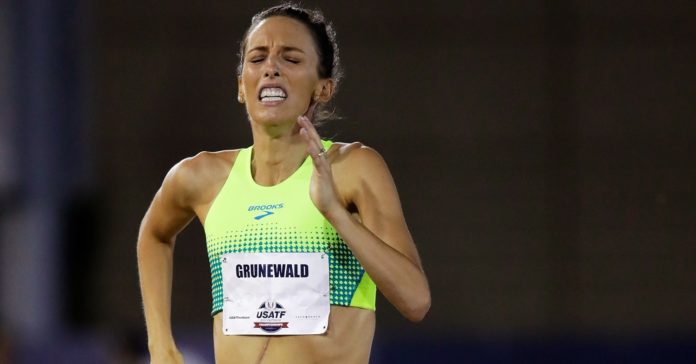 The image is hard to look at now without crying: a thick red scar, carved across Gabriele Grunewald’s midriff as she flies around the track. At first it looks like it shouldn’t be there; perhaps it’s just an out-of-place shadow. But soon it becomes obvious what it truly is: a symbol of perseverance and pain. A signifier that a disease that would end the life of one of America’s finest runners was working its wretched ways inside a body that was moving as fast as few others had moved before.

Grunewald first learned that she was sick in 2009, when she was a good, but not yet transcendent, runner at the University of Minnesota. She found a lump under her left ear, got a biopsy, and then, strangely, received the bad news in a phone call. The diagnosis was adenoid cystic carcinoma, a rare cancer that, she learned from Google, probably gave her five years to live.

We all live with a death sentence. But we usually aren’t given such a short one, right before a track meet, when we’re just 22. Grunewald took it with grace. As she would say in later interviews, she realized she had just three things to do with the time she had left: spend time with the people she loved, run as well as she could, and try to help find a cure for her disease.

She met the first two goals with otherworldly dignity. She married Justin Grunewald, an elite distance runner and soon-to-be-doctor. Every day they would run together, sometimes in absolute silence, drawing joy from the fact that they were together and alive. And she began to reach another level of racing, even as she managed her treatments. The day after her first diagnosis, she ran her then-fastest time in her best event, the 1500 meters. In 2010, she came in second in the NCAAs, the same year she was given her second cancer diagnosis, this time in her thyroid. The next year, she came in third in the country in the indoor championships. And then in 2012, she missed qualifying for the Olympics by just one spot.

The five-year mark after her diagnosis came in 2014 and she was still flying: winning a national title and a spot on the world team that year. But after seven years, the bell tolled. One day, after a race, Justin was giving her a hug, and noticed a lump. The cancer had moved to her liver. Surgery followed; that’s when she acquired the scar.

It was her third goal—helping the research into rare diseases—that mattered most. She didn’t hide the scar, because she wanted people to know what she had gone through, and she wanted to help the scientists working to fight the rare cancers that strike so many of us. “Scars,” she said, “are a testament to power and survival.” She started the Brave Like Gabe Foundation to raise money for research and to help cancer survivors live active lives. In a poignant interview, in 2018, she told The Morning Shakeout podcast, “This isn’t how I would have chosen my life to turn out at all but maybe this is my way of fulfilling my life’s purpose and trying to raise awareness for these rare diseases that really do actually need it.”

I should disclose here that her life was more than a little inspiring to me. I too had a struggle that was like, and also deeply unlike, hers: a cancer diagnosis that came after running a fast marathon time, a struggle, a scar. I’m through it now, but I still run and train in no small part because it’s a reminder that I’m alive. At times, I’ll snap back to the months after my treatments, and times when I felt like I could barely walk, and remember how beautiful it is to be able to run.

Grunewald kept running and racing too after the surgery. She wanted a chance to run the 2020 Olympic trials. But this spring, she took a turn for the worse. Her friends, the running world, and everyone she inspired followed her and Justin’s posts on Instagram, hoping against hope that she could defeat the disease one more time. “Prayers very much welcome,” she wrote in May.

Running is one of the most human sports. It’s just you, and your body—against other people or against the clock. The best do it until their bodies give out, either because of age or injury. The rest of us do it as best we can: to get fit, to find relief from the other stresses of life, to be outside in the mountain air. Grunewald did it for herself, but also for so many others. As she said in an interview last fall, “I would never have raised my hand to do this, but someone has to.” Gabe Grunewald died on Tuesday at the age of 32.