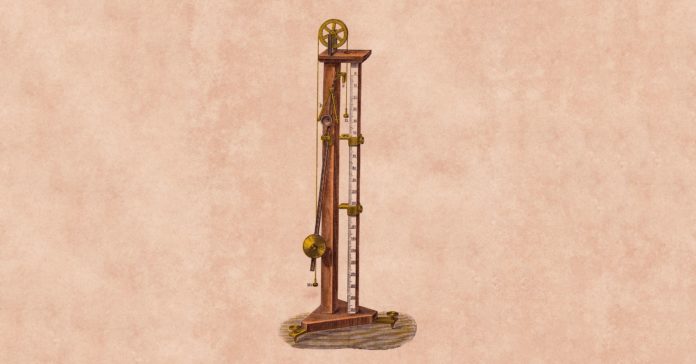 Imagine you want to study what happens when an object accelerates. Oh, this is way before any of that internet stuff—also, no computers or electronics. In fact, let’s say it’s the year 1780. What do you do? You could just take a mass and drop it. That would work. Since the gravitational force is constant, this will give it a constant acceleration. The object will move with a vertical acceleration of 9.8 meters per second squared. Simple.

Yeah. That happens fairly quickly. It’s pretty hard to get any position-time data out of this. That would be especially true if you don’t even have a digital watch. So, what do you do? You need some way to get a constant acceleration—but a lower acceleration than 9.8 m/s2. One option would be to roll stuff down an incline. But in that case, it has to be a rolling object. The other solution is what George Atwood came up with. Not surprisingly, it’s called the Atwood machine.

This Atwood machine uses two masses and a pulley. The two masses are connected by a string that runs over the pulley such that one mass hangs on each side. Here is a diagram:

Ideally, the pulley would have a very low mass (compared with the two hanging masses) and hopefully very low friction on the axle. If the two masses are identical and released from rest, nothing will happen. If one is more massive than the other, the system will accelerate. But how do we find the value of this acceleration? Since this is a fairly classic physics problem, let’s go over the details. Actually, there are two ways to solve this problem, and I will go over both ways.

Let’s start with an analysis of the force on each mass. Both masses have just two forces. There is the upward pulling tension (from the string) and the downward pull of the gravitational force. If we know the net force on an object, we can also find the acceleration of that object according to this force-motion equation:

With that, I can find a force-acceleration equation for both masses. Remember, the two masses have the same tension force (but in opposite directions). Also, if mass 1 accelerates up with some acceleration (a), then mass 2 accelerates down with the same magnitude of acceleration (since they are connected by a string). Here is a diagram with the two force equations.

Wait! Too much math! OK, calm down. There’s not that much math, and you don’t have to solve any equations. I just want to show you how this whole thing works. In fact, I remember doing this problem as an undergraduate, and I recall the error I made (multiple times). I wanted to say that the tension in the string was just equal to the weight (gravitational force) of one of the masses. Of course that’s wrong. Which mass would the string “choose” to get the weight from? A more important reason this is wrong is because the masses are accelerating. With an accelerating mass, the net force is NOT zero.

OK, let’s do it again by thinking about it in a different way. Clearly, it is the difference in mass that is the key to this whole thing. The extra mass on one side of the Atwood machine creates a net gravitational force pulling down on the system. This net force is just the difference in mass multiplied by the gravitational field (g). But what does a net force do? It makes an object accelerate. However, both masses have to accelerate. Putting these two ideas together with the force-motion equation gives:

If you solve this for the acceleration, you get the same thing as the other method. It’s nice when two different methods agree. But the best agreement is with real life. So, let’s do that. How about I use a real Atwood machine and measure its acceleration, then compare that to the theoretical acceleration? Here’s what my machine looks like.

One one side is a mass of 200 grams, with 205 grams on the other side. The connecting string runs over a “smart” pulley. This pulley can record the angular position as it rotates—and knowing the diameter of this pulley, I can get position and time data for the two masses. Oh, notice that the heavier mass (on the right side) initially goes UP and then DOWN. It still has a downward acceleration even though it’s moving up. By going both up and down, I can collect more data. More is better.

Actually, instead of showing position data, I’m going to slightly cheat. I am going to use the velocity of the masses. The software for this smart pulley (made by Vernier) takes a numerical derivative of the data to also give velocity. Since the acceleration is the derivative of velocity, the slope of a velocity-time graph would be the acceleration. It just looks nicer than the parabola from a position-time graph.

Here is the data from the real Atwood machine.

Notice that the slope of the line is 103.6 mm/s2 or 0.1036 meters per second squared. Oh, the part before and after that downward slope are the times when the mass was being pushed and then stopped—just ignore that part. If you use the above theoretical formula for acceleration with those masses, you get a value of 0.121 m/s2. That’s not too bad. Of course I made some assumptions that might cause the experimental value to be off by just a little bit. I assumed the mass of the pulley was small enough to be ignored and that the frictional force was negligible. With a little more work, I could check if these assumptions are valid. Perhaps that will be a future homework assignment.