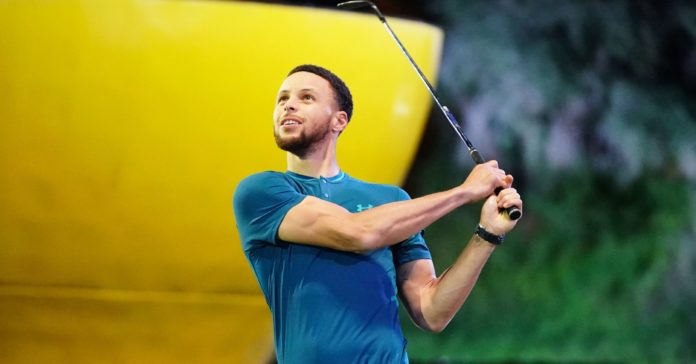 I couldn’t help myself: I had to check out the new ABC show Holey Moley, an extreme mini-golf show that has Steph Curry as its resident golf pro and one of its executive producers. It’s somewhere in between MXC (the Japanese show Most Extreme Elimination Challenge) and PGA golf. The holes are more crazy than a normal putt-putt golf course. On top of that, the mini-golfers sometimes have to get over obstacles to get to their ball. The first episode was fun, but can they keep this up?

OK, in the spirit of helping others—I’m going to give some ideas for some new mini golf holes. Here we go. Steph Curry, I hope you are reading this.

Actually, this isn’t a real suggestion. It’s a great idea, but they already had this in the first episode. The only problem—they showed it for just a few seconds.

The idea is to have both a hole and the golfer on a rotating platform. Normally, a golf ball will follow the rules of physics (OK, this is always true). Our ideas about forces and motion, however, only work in a non-accelerating reference frame. A spinning floor does indeed accelerate—but we can still use force ideas. We just have to add some fake forces. The fake force allows a rotating reference frame to act like a stationary one.

But wait! You already know this. You have experience with fake forces—even though you don’t realize it. When you are in a car going around a circle, you feel a force pushing you away from the center of the circle. Surprise. There is no such force. It’s fake. It’s the centrifugal force (not to be confused with the centripetal force). Actually if you move towards or away from the center of a rotating platform, there is another fake force you can add—the Coriolis force.

Let’s start with a great demo. In the video below, two humans are on a rotating platform (on opposite ends). What happens when they try to toss a ball back and forth? Check it out.

OK, how about another demonstration. Here is a great python program (on Glowscript.org) that shows two views of the same rotating space station. The left window shows the space station as seen from a non-rotating point of view and the other window rotates with the space station. You can play with the program here.

This is important because it shows that the forces are indeed fake. In the non-rotating frame, the ball just moved along with a constant velocity—just as it should with no net forces acting on it.

Now for a recommendation of a hole for Holey Moley. Yes, make it a rotating platform. It should be big enough and rotate fast enough such that you can see a noticeable Coriolis effect. I would put the golfer on the edge of the platform and the hole in the middle (or on the other side). If you really want to spice it up, you could even add some small hills or something like that. The possibilities are endless. Do this.

When you think about mini golf, you should think about forces. Oh, I know that’s not what most people think about—but it’s true. Without forces, an object will move along a straight line at a constant speed. That would make golf rather trivial. So, we add forces. In normal mini-golf there is the backwards-pushing frictional force, and there can also be forces from non-flat surfaces (also known as “hills”).

But what about another force like the air drag force? This is a force that depends on the speed and direction of the relative motion of the ball and the air. This relative motion between ball and air could be due to a fast-moving ball or it could be from wind. That’s the ticket here for a Holey Moley hole.

Here is the idea: Get some of those super fans and have them blow sideways across the motion of the ball. That would push the ball to the side and the golfer would need to compensate. Yes, this is sort of like a hill—but not quite. If you want, you could drop some confetti or stuff in the wind to create a nice visual effect.

The key to an interesting hole is to add forces. But there aren’t that many options left except the electromagnetic force. This is a fundamental force that acts on electric charges (and moving electric charges).

You might want to do something with just plain static electricity forces. That’s a good idea, but it’s very difficult to get it to work. The problem is that an object usually has about the same number of electrons and protons, so that net force is at least weak. The other problem is that any excess charges you get on an object can leave when it touches stuff—like the ground or the air. In fact, static charges often fade quickly in the presence of high humidity air. That’s why you don’t get so many tiny static shocks in the summer when the humidity is higher.

So, that leaves us with the magnetic side of the electromagnetic force. I’ll be super honest here—this stuff often gets super complicated. “Magnets. How do they work?” I’m just going to say atoms and quantum mechanics. But really, some materials are magnetic and can produce strong magnetic forces.

However, to get a magnet-based Holey Moley hole you are going to need a special ball. A standard golf ball isn’t going to have any interactions with magnets. But you could put a magnet in a ball. Or better yet, give the ball an iron core. After that, you could place strong magnets on the sides or under the playing surface. The effect on the ball would likely be very difficult to predict since the magnetic force increases significantly when objects get close.

There is another option. Put a magnet in the ball and then have a conducting metal surface under the playing surface. When a magnet moves over a conductor, it creates an electric current. This electric current then makes another magnetic field to slow the ball down. That would be sort of fun.

Oh, I didn’t even get into ideas about the obstacles for the golfers. That would create a whole bunch of more ways to change things up. So, I hope they do keep making some changes—it will be fun to see what they come up with.