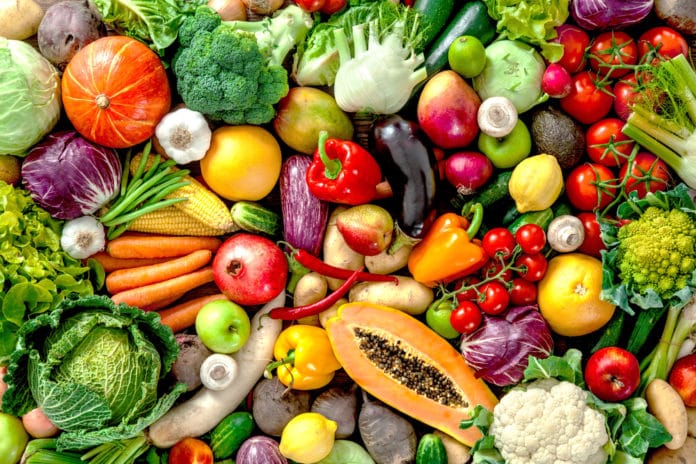 An apple a day may not keep the doctor away, but several could do the trick. Millions of cardiovascular deaths around the world may be linked to a lack of fruit and vegetable consumption, according to preliminary results from a Tufts University study.

Vitamins and minerals like potassium, fiber and magnesium and antioxidants found in fruits and vegetables can help lower blood pressure and cholesterol. And a large body of knowledge already suggests that there are strong correlations between a diet with few fruits and vegetables and serious diseases — especially cardiac conditions.

Many countries across the globe had low, or suboptimal, fruit and vegetable consumption levels. Africa and Asia had the highest concentration of countries with poor health outcomes tied to a lack of dietary fruits and vegetable. But every continent except Australia (and Antarctica, of course) had one or more countries where at least 10 percent of cardiovascular deaths resulted from the same cause, the researchers say. 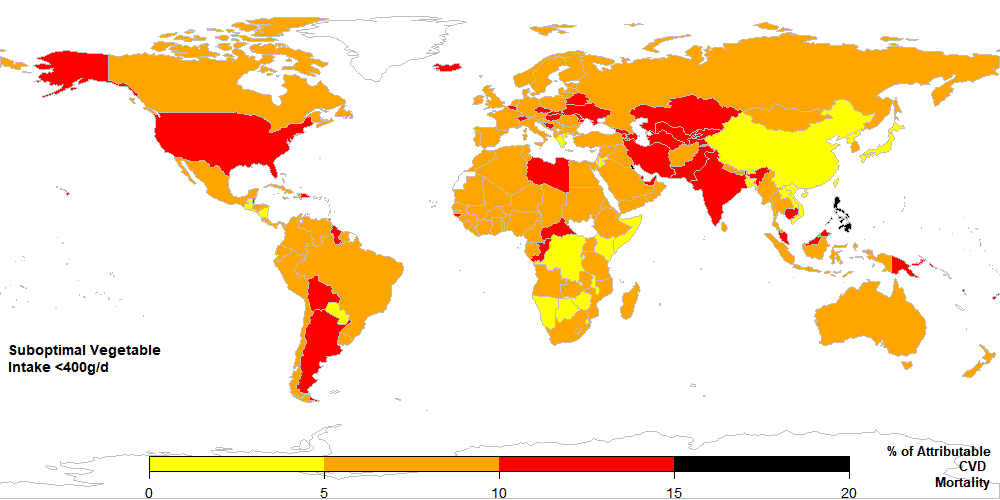 This is a percentage of cardiovascular deaths (cardiovascular disease mortality) attributable to suboptimal vegetable intake (less than 400 grams per day) in countries around the world. (Credit: Global Dietary Database 2010/Friedman School of Nutrition Science & Policy at Tufts University)

In the United States, between 10 and 15 percent of cardiovascular deaths (which includes strokes) were attributed to suboptimal vegetable intake, while between 5 and 10 percent were linked to suboptimal fruit intake.

But the researchers aren’t expecting you to eat a bucket of kale or an entire bag of apples every day to stay healthy. Optimal intake, as defined by the study, is the equivalent of around two small apples and three cups of raw carrots day.

Lead author Victoria Miller says changing diets could be an easily digestible way for communities to encourage people to take care of themselves. 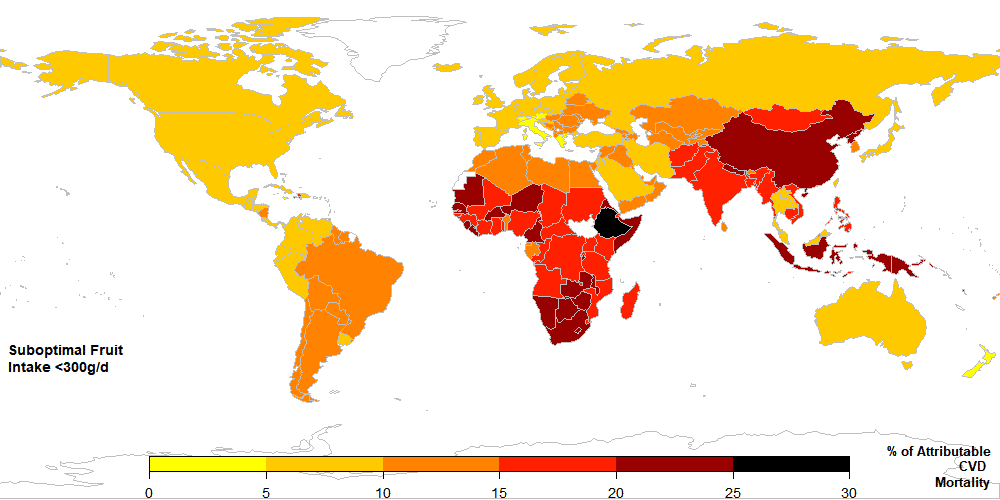 This is the percentage of cardiovascular deaths (cardiovascular disease mortality) attributable to suboptimal fruit intake (less than 300 grams per day) in countries around the world. (Credit: Global Dietary Database 2010/Friedman School of Nutrition Science & Policy at Tufts University)

The research team’s findings were presented at the Nutrition 2019 conference last weekend in Baltimore. Results were drawn from studies estimating fruit and veggie consumption for different countries gathered by the Global Dietary Database at Tufts and mortality data collected by the Global Burden of Disease study in 2010. The team also used data from recent meta-analyses that found strong correlations between fruit and vegetable consumption and cardiovascular death.

Though the results show clear deficits in certain nations, Miller said the research team is mainly focused on looking at the correlations between nutrition and cardiovascular death on a global scale, rather than tracking down the reasons why certain areas suffer from a lack of fruit and vegetable consumption.

“I think it’s a very complicated issue as to what’s driving intake in a population,” she said. “I don’t think we fully understand that within the United States or these other countries.”

Miller says the team plans to expand the study by analyzing data spanning a greater amount of time in addition to examining how education levels and urban versus rural living could come into play.