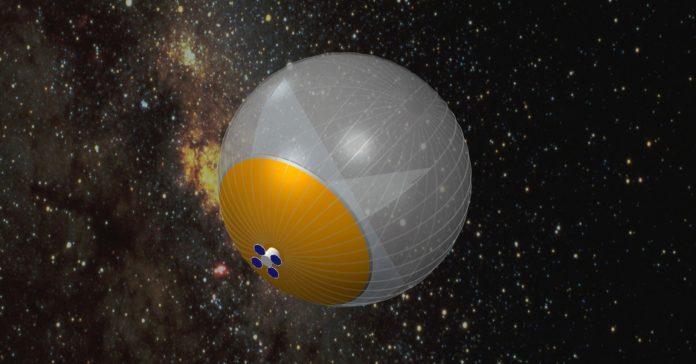 If we ever have giant inflatable telescopes in space, you can thank Chris Walker’s mom. Years ago, Walker was making chocolate pudding when he had to interrupt his culinary undertaking to field a phone call from his mother. He took the pudding off the stovetop, covered it with plastic wrap, and placed the pot on the floor by his couch. When the call was finished, he was startled to find an image of a lightbulb from a nearby lamp hovering over the end of the couch. When he investigated the cause of this apparition, he found that a pocket of cold air that formed as the pudding cooled had caused the center of the plastic wrap to sag toward the pudding. This had, in effect, formed a lens that was reflecting the lightbulb.

“I thought, ‘hey, this is cool, but I have no use for it now,’” Walker, a professor of astronomy at the University of Arizona, says. But 30 years later, he used it as the basis for a proposal he sent to NASA Innovative Advanced Concepts, a program that funds far-out aerospace ideas.

The subject of that proposal was essentially a way to turn a giant inflatable beach ball into a space telescope. This suborbital balloon reflector wouldn’t contend with as much atmospheric interference as ground-based telescopes. Furthermore, it could be easily scaled up, thereby opening vasts swaths of the universe to observation without the hefty price tag associated with building large, solid telescopes.

The idea for the large balloon reflector grew out of Walker’s work on the Stratospheric Terahertz Observatory, a one-meter telescope attached to a high-altitude balloon that circled Antarctica in the upper atmosphere for several weeks in 2012. As Walker watched the balloon inflate with 35 million cubic feet of helium, it occurred to him that the balloon was a lot of wasted space for such a small telescope. Wouldn’t it be nice if the balloon itself could be used as an observatory? This observation, combined with the insight from the pudding incident decades prior, led to the creation of the first inflatable telescope.

In 2014, Walker and his students made the first prototype of the large balloon reflector out of a large inflatable plastic sphere sold by a Chinese toy manufacturer. The ball had been designed for people to climb around inside like a human-sized “gerbil ball,” but it also turned out to be pretty great for radio astronomy. Walker suspended an antenna inside the ball and sprayed a circle with metallic paint on the inside to create a reflector. With this rudimentary setup, Walker and his students were able to do radio observations of the sun from the rooftop of the astronomy building at the University of Arizona. Even though it wasn’t sent to the upper atmosphere, Walker says it demonstrates that even a very crude version of the telescope could get good results. “I knew it would work, but you have to show people,” he says. “Nothing beats a rooftop demonstration.”

But Walker realized the real benefits of a spherical, inflatable telescope would be found in space. Traditional radio telescopes use parabolic dishes as reflectors, which gather radiation and focus it on a specific point. While this works well enough, astronomers have to move the entire dish to point it a specific spot, which becomes a burden when the telescope is in space. With Walker’s design, you can point the telescope by moving the antenna inside the sphere, rather than repositioning the entire telescope. A spherical telescope also has a large field of view, so it can image large portions of the universe without moving.

Walker’s inflatable telescope is not the first time NASA has flirted with beach balls in space. In the early 1960s, NASA launched Echo 1 and Echo 2, which were massive inflatable reflectors that could passively bounce radio signals around the world. But no one ever applied the concept to deep space observation. (Although in 1996, NASA did an experiment with an inflatable parabolic reflector in space.) After proving that the large balloon reflector worked as intended, Walker received a Phase 2 NIAC grant to design a space-based version of the inflatable telescope.

The result is the Terahertz Space Telescope, an inflatable ball 40 meters in diameter with a steerable antenna inside. Because gas pressure in space is so low, Walker says you could inflate the massive telescope using less gas—likely nitrogen or neon due to their low freezing temperatures—than you’d need to inflate a party balloon on Earth. Obviously space debris and micrometeoroids are a concern for inflatable objects in orbit, but Walker says if one were to hit the balloon, the slow diffusion of gas in the telescope means that it would still take years before the telescope deflated.

The effective diameter of the Terahertz Space Telescope, Walker says, would be about 25 meters. To put this in perspective, the James Webb Space Telescope, which is slated to launch in 2021 and will be the most sensitive telescope ever sent to space, has an aperture of about 6.5 meters. The price difference is even more dramatic: Walker estimates the inflatable telescope would cost about a $200 million to send to orbit, whereas the James Webb telescope is expected to cost about $10 billion by the time it’s launched.

But Walker’s telescope still needs to get built. If it can overcome that hurdle, the Terahertz Space Telescope could observe the universe using wavelengths that would allow it to detect the presence of water in deep space. It could help locate water-rich asteroids within our solar system, or help detect water in the habitable zones of other solar systems. Walker is particularly excited about the prospect of detecting gaseous water near the stars in protoplanetary systems, which he says could tell us a great deal about how Earth came to be covered in water.

For now, though, the Terahertz Space Telescope has only undergone two small experimental tests. Both tests were conducted under the auspices of Freefall Aerospace, a company Walker co-founded as a spinoff of his work on inflatable telescopes. Freefall aims to use inflatable satellites similar in design to this telescope to beam 5G to Earth. Last year, a prototype of one of these inflatable satellites hitched a ride to the stratosphere on a NASA high altitude balloon, and demonstrated its antenna-steering technology flawlessly. Shortly thereafter, Walker began working on a design to create a constellation of inflatable satellites and got two prototypes to “talk” to one another on the ground.

Next, Walker expects to deploy an inflatable 5G satellite in orbit attached to a cubesat. He is also working on two NASA proposals to send the large balloon reflector to the stratosphere and the Terahertz Space Telescope to orbit. Recently, Walker and his colleagues even pitched NASA on a space-based array made out of these inflatable telescopes, which would allow them to image the surface of exoplanets around Alpha Centauri, our closest stellar neighbor. Yet as with all things in space science, securing the funding for the mission will be almost as difficult as developing the technology. But with any luck, we may be hunting for habitable exoplanets using giant inflatable telescopes in the not-so-near future.