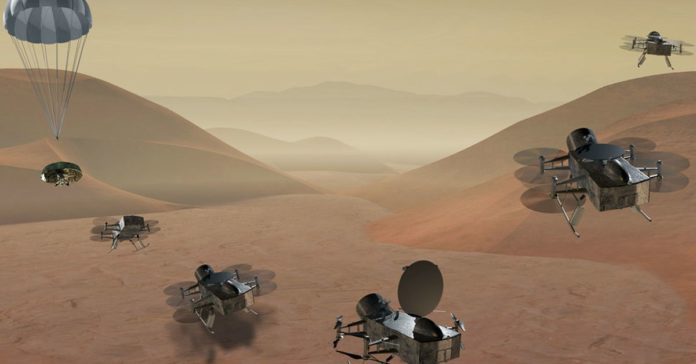 On Wednesday, NASA announced it will send a spacecraft to the surface of Titan, Saturn’s largest moon and one of the leading candidates for finding extraterrestrial microbial life in our solar system. The Dragonfly mission will involve a small, drone-like rotorcraft lander that will be able to fly in small hops across Titan’s surface, covering more distance during its two-year mission than any planetary rover in history.

Dragonfly is scheduled to launch in 2025 and will land on Titan in 2034, after a 840-million-mile journey from Earth. Once the Dragonfly craft lands on the surface of the moon, it will use its eight rotors to perform short flights once every Titan day (about 16 Earth days). According to its initial designs, the craft will be able to propel itself at about 20 miles per hour and fly to altitudes of a little over 2 miles. It will be powered by the heat produced by the decay of plutonium-238.

Despite the Dragonfly spacecraft’s unique flying abilities, most of its time on Titan will be spent on the surface. During its approximately two-year mission, Dragonfly will study the moon’s atmospheric and geologic composition, survey the landscape, and probe for conditions and chemicals relevant to biological processes.

The surface of Titan is extremely varied, with rivers, lakes, and oceans of liquid methane and ethane etching the moon’s water-ice bedrock. A narrow band of sand dunes, perhaps formed by methane rain eroding the water-ice, rises hundreds of feet above the surface and stretches hundreds of miles around Titan’s equator. Beneath Titan’s water-ice crust is a vast, planet-wide ocean that some scientists suspect may harbor microbial life.

Titan is of great interest to astrobiologists because its thick nitrogen- and methane-rich atmosphere provides the necessary ingredients for creating the complex organic molecules called tholins that, when exposed to water on Titan’s surface, may yield amino acids—the building blocks of life. Furthermore, environmental conditions on Titan appear to be similar to those found on early, prebiotic Earth. This means that not only is Titan a leading candidate for finding extraterrestrial microbial life in its subsurface ocean, it may also help us better understand how life arose on Earth.

Much of what we know about Titan was only discovered in the past two and a half decades. When the Voyager spacecraft flew by in the 1970s, it was unable to see through the moon’s atmosphere, which is twice as thick as Earth’s. The world got its first look at Titan’s surface in the 1990s with the infrared sensors on the Hubble Space Telescope, but it wasn’t until the Huygens probe landed on the moon’s surface in 2005 that scientists could say with much certainty what conditions on Titan were like.

The Huygens probe was carried to Titan by the Cassini orbiter, which deposited it on the moon after mapping most of its surface. The Huygens probe landed in what appeared to be a dry lakebed and sent back the first picture from Titan’s surface. It revealed a barren landscape strewn with small rocks made of water-ice under an orange sky. The Huygens probe continued to send data back to Cassini for about an hour and a half after landing, before its battery died as planned.

Ever since Huygens’ historic first descent to the surface of a moon other than our own, planetary scientists have been dying to go back. Although the idea of the Dragonfly mission dates back to 2000, it got its first big boost in 2017 when NASA selected it as one of two finalists for its next New Frontiers mission. The New Frontiers program was started in 2003 to fund solar system exploration missions with a cost cap of $850 million. Prior to Dragonfly, New Frontiers launched three other missions: New Horizons, a mission to Pluto and the Kuiper belt; Juno, a mission to Jupiter; and OSIRIS-REx, which will return a sample from an asteroid. Each of these missions has vastly expanded our understanding of the solar system, and when Dragonfly arrives at Titan it is sure to continue this legacy.