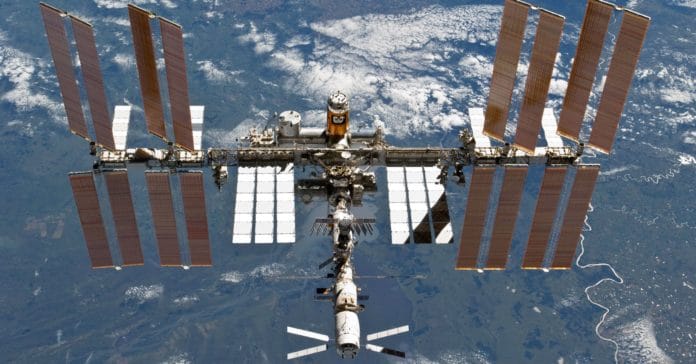 On Friday morning, three senior members of NASA leadership gathered at the Nasdaq stock exchange in New York to announce that “the International Space Station is open for commercial business.” The trio outlined the space agency’s plan for the world’s only orbital laboratory, a move they say would allow NASA to focus its resources on sending humans to the moon by 2024, the same year when US funding for the ISS was slated to end.

According to the plan outlined today, NASA will be rolling back its restrictions on for-profit and marketing activities on the space station. Companies will now be able to pay for astronauts to help advertise their products and use the space station facilities for manufacturing and other money-making ventures. Initially, NASA has limited purchasable crew time to 90 hours and 175 kilograms of commercial cargo per year. NASA also says it will open the space station to short-duration stays by commercial astronauts traveling on private spacecraft, which it says could begin as early as next year. Additionally, NASA says it will lease the last open port on the ISS, where a new module can attach, to a private company and expects to award that contract by the end of the fiscal year. “We’re trying to knock down all the barriers that have been around for awhile and see what the private sector can do to construct a business plan,” says Jeff DeWit, NASA’s chief financial officer.

Last month, NASA released a large study that outlined how leading companies, including Blue Origin, Lockheed Martin, and Northrop Grumman, envisioned profiting off the ISS. As detailed in the report, the space station might turn into a hotel for tourists. Or a manufacturing center. Or a testbed for satellite technology and independent space stations. NASA’s 2019 budget earmarked $40 million for its Commercial LEO Development program, but until today it wasn’t clear how that money would be used. According to NASA officials, that money will be used in support of the goals outlined by companies in the study, but the specifics will depend on proposals submitted by the companies.

The peddling of the ISS is part of a broader trend that amounts to NASA handing off its assets to private companies. In 2017 the agency announced that Kennedy Space Center, the launch site for the Apollo and Shuttle missions, would become a “multi-user spaceport,” a euphemism for leasing many of its facilities to private contractors. And last year NASA administrator Jim Bridenstine told The Washington Post that he was discussing the transfer of the ISS to a corporate conglomerate when funding ends in 2024. (NASA’s own Office of Inspector General characterized that ambition as unrealistic, and the Trump administration is no longer aiming to completely terminate ISS funding). Bridenstine also convened a committee to study ways to commercialize NASA, and even floated the idea of selling naming rights to rockets.

Vice President Mike Pence, the administration’s leading voice on space policy, is making the corporate takeover of space assets a pillar of his policy. As he put it in a National Space Council meeting last year, “there’s no reason our own federal government should stand in the way of the trailblazing companies that are forging and re-forging American leadership in space.”

But maybe there is a reason. The Trump administration is not the first to try to privatize low-Earth orbit and the space station—that honor goes to Ronald Reagan, the other celebrity-turned-president. As Reagan pushed for the creation of the ISS, he baked privatization in from its inception. A professed lover of outer space, UFOs, and science fiction, Reagan directed NASA to rewrite decades-old laws to make NASA more amenable to commercialization. Now many of the initiatives he spearheaded are coming to fruition under Trump, wrapped in the same free-market rhetoric and emotional appeals to American leadership.

Despite Reagan’s optimism about the glorious future of space capitalism, the market wasn’t ready to support his plans. It’s uncertain whether it will today, either.

“It’s like déjà vu,” says John Logsdon, a professor emeritus of political science at George Washington University who had voiced his skepticism of Reagan’s commercialization timeline in the 1980s. “We’re right back to where we were.”

When Reagan was sworn in as president in 1981, NASA’s space shuttle program was not even a decade old. He campaigned on the idea that free markets and private enterprise were key to American prosperity, and these ideas soon found their way into the government’s space program. His National Space Policy included, prominently, the expansion of the private sector’s involvement. As Logsdon notes in his recent book, Ronald Reagan and the Space Frontier, “this was the first time a government role in encouraging commercial space activity had been called out in national space policy.”

The Reagan administration moved quickly to turn its ideas into action. First it transferred the operation of remote sensing satellites to private enterprise, specifically the Landsat program. Its attempts to broker a similar deal around reusable launch rockets, namely the space shuttle, were less successful. The ultimate prize, though, was a space station that would act as an orbital platform for commercial activities.

In support of that vision, NASA commissioned a series of studies to learn what sorts of commercial activities would benefit from a space station in 1982. Shortly thereafter, NASA administrator James Beggs convened a panel to study the “potential of private industrial and commercial development in space.” The commercial prospects highlighted by these discussions bear a striking resemblance to the opportunities highlighted by NASA officials at the stock exchange this week. As detailed in a 1983 New York Times article, low-Earth orbit was touted as a promising venue to develop new pharmaceuticals, manufacture electronics, establish telecommunications services, and collect remote sensing data, in addition to more traditional space activities having to do with rocket launches and in-orbit services. All told, these commercial activities were predicted to comprise an entirely new, multi-billion dollar market.

Reagan’s dreams of privatizing low-Earth orbit came crashing down—literally and figuratively—on January 28, 1986, when the space shuttle Challenger blew up during flight and killed all seven astronauts on board. By the time shuttle flights resumed two years later, plans for the space station were on life support. As Congress was preparing its budget for 1989, there was a strong push in the senate to only provide a bare minimum of funding—about $250 million—for its development, far short of Reagan’s request of nearly $1 billion. The president fought back at NASA’s behest, and Congress ultimately agreed to appropriate $900 million for the space station’s development.

Reagan lived just long enough to see the first astronauts begin inhabiting the space station. In keeping with Reagan’s vision, the ISS has always hosted private payloads, but they’ve fallen far short of his ambitions. As detailed in a report published by NASA’s Office of Inspector General last year, the ISS has seen “scant commercial interest…over nearly 20 years of operation,” which raised big questions about whether it could be sustained through private investment alone after 2024. NASA’s trip to the Nasdaq stock exchange, then, can be seen as a sort of trial balloon.

Still, one can’t help but wonder if the agency is making the same mistakes, compelled by the unrealistic demands of a presidential administration. As Logsdon notes, Reagan’s push for the commercialization of space was “based on ideology and hope, not reality.” That administration ignored warnings that private space industry still needed significant government subsidy and did not undertake “independent analysis of whether those products [made in space] could compete with Earth bound equivalents, given the high costs of operating in space.” Yet as the space historian Joan Bromberg wrote in NASA and the Space Industry, “free enterprise was part of the US tradition, so to promote it in space was to defend the American way.”

So when Pence casts the commercialization of space as a patriotic mission to guarantee American leadership in the final frontier, he’s retreading old ground, once again leaning more on ideology and hope than reality. To be sure, many things have changed since the Reagan administration. Companies like SpaceX now regularly shuttle supplies to and from the ISS, a mission profile that was once the sole purview of NASA. The commercial remote sensing industry is growing at an unprecedented rate and is expected to become a multi-billion dollar industry in the next decade. The space telecommunications industry is also experiencing something of a renaissance, with companies like SpaceX, OneWeb, and even Amazon planning to launch thousands of internet satellites into orbit in the coming years.

But through it all, the ISS has been largely ignored. NASA insists there’s a business case for its orbital outpost. Using the facilities on the space station will be incredibly expensive, however, so it’s still not clear whether companies will find it attractive without significant government subsidy. Regardless of the outcome, when NASA visited Nasdaq this morning it made a Reagan-era dream come true.