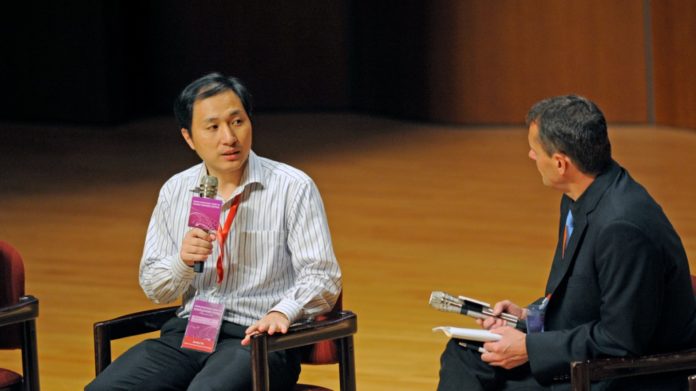 Jiankui He talks to Matthew Porteus of Stanford during a panel talk in Hong Kong following his presentation about his gene editing experiment on two twins. (Credit: Ernie Mastroianni/Discover)

This past November, Jiankui He, a Chinese scientist, claimed to have edited the genomes of twin girls when they were embryos. Genome editing on human embryos is against the law in the U.S., but not specifically outlawed in China. It is however wrought with ethical concerns because any changes to DNA can be passed down to future generations.

He says the genetic alterations were done to help the girls fight off infection from HIV. But the effort, which was not reviewed by the scientific community, may have unintended consequences. But in new research published Monday, researchers say they’ve shown that people who have the same mutation He made to the twin girls’ genomes may also have a higher death rate than people without the mutation.

“Perhaps the most important takeaway is that a single mutation might have many different effects,” said Rasmus Nielsen, a biologist and statistician at the University of California Berkeley, who led the new research. “And when considering inducing mutations in humans, it is important to consider all the possible different effects of the mutation under different environmental conditions.”

He had recruited HIV-positive heterosexual couples hoping to get pregnant through in vitro fertilization to participate in his research. Then he used the genome editing technology CRISPR to modify a gene called CCR5 in the embryos. CCR5 controls how the HIV virus enters human cells. He’s edit removed HIV’s entry doorway.

The consequences of the mutations are unknown. Although the mutation protects against HIV in Europeans, people with the mutation are also more likely get West Nile virus and to die from the flu, for example. Another concern was how well the editing worked. Follow-up tests on the twins indicated the technology edited both copies of the gene in one girl but only one copy in her twin. Researchers that reviewed materials He sent to the press were particularly concerned about the unintended consequences for the baby with only one edited copy of the gene.

Nielsen and the team of scientists on this latest study expected that mutations in both copies of the CCR5 gene could be harmful. That prompted the researchers to compile data on more than 400,000 people from the UK BioBank, a health information database. Specifically, they looked at death registry information and people with mutations on the CCR5 gene. The team was able to glean whether people who had two copies of the mutation had higher or lower mortality rates than people that carried only one or zero copies of the mutations, Nielsen explained.

For Nielsen, the findings emphasize the current risk of unknown consequences of editing embryonic genomes. “I can’t think of a single good and justified use of germline editing in humans using the current technology, given the risks involved,” he said.

Dyson is working on an electric car set to launch by...

GizmoCrazed - September 27, 2017 0
Dyson, maker of high-tech vacuum cleaners and fans, has long been rumored to be getting into the car game. That’s no longer a rumor,...

This Company Wants Your Fertility Data

Would Delivery Drones Be All That Efficient? Depends Where You Live