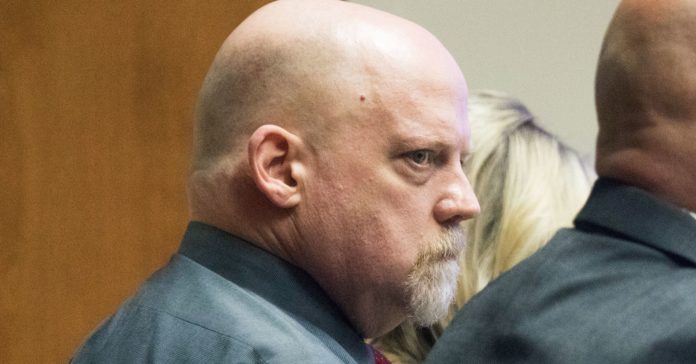 On a large screen inside a packed Snohomish County courtroom, in Washington state, a young Canadian couple smiled out at the dimmed room from the relaxed, faded scene of a party. It was the last known picture taken of Tanya Van Cuylenberg and Jay Cook together before they disappeared in November 1987. Their bodies were discovered days after they went missing, more than 60 miles apart.

Thirty-one years later, William Talbott II is now standing trial as the first person to be accused of the double murder. In their opening statements on Friday, attorneys on both sides traced the teenagers’ last-known movements through ferry ticket stubs, deli receipts, and forgotten travelers’ checks. They catalogued the many dead ends pursued by police and, finally, the break last year provided by a DNA link to Talbott’s genealogy-curious relatives. Since then, law enforcement’s use of public ancestry websites has led to arrests in dozens of other cold cases and will likely show up in several more trials later this year and next. But in the first court case to test the use of genetic genealogy by law enforcement, a clash over its significance could prove to be the trial’s defining controversy.

Deputy prosecutor Justin Harleman described the groundbreaking forensic technique to the jury Friday, including how a genetic profile of crime scene DNA was uploaded to a public genealogy database. The matches it produced, and the family tree they fit into, led investigators to Mr. Talbott. “It first was a tool used to identify victims,” Harleman told the jury. “You’re going to hear how eventually this tool was used to search for and find perpetrators of these crimes.”

The defense disputed the characterization. “The genetic genealogy that you heard briefly about here, the prosecutor said is a good tool for catching perpetrators, which is inaccurate,” argued Jon Scott, a defense attorney for Talbott. “It’s a good tool for giving prosecutors an insight into who left particular biological evidence. Whether that person was the perpetrator or not, other evidence would need to show that.”

Both sides have agreed to treat genetic genealogy as a method for investigators to generate leads, akin to someone calling in a tip over the phone. Harleman said this explicitly on Friday. “The state is not going to ask you to convict Mr. Talbott based on this process,” he said. Instead, prosecutors will lean heavily on evidence taken after Talbott was arrested in May of 2018. First, a swab of DNA taken from inside his mouth that they say matches semen found at the crime scene. According to court documents, the chance that the DNA is not his is one in 180 quadrillion. And second, a palm print from Talbott’s left hand, which the Washington state crime lab found to be consistent with a partial print pulled off the van that Van Cuylenborg and Cook were driving at the time of their disappearance. These are the pieces of evidence they believe show Talbott to be the only person who could have committed these brutal murders.

But the defense argued Friday that it’s not enough. Semen found on the hem of Van Cuylenborg’s pants doesn’t explain where she was or what happened during the five days between when she was last seen alive and when her body was discovered resting partway down a roadside ditch, said Scott. He also laid out his plans to challenge the validity of the palm print match. And he pointed to the lack of other material evidence that might link Talbott to the murders, including murder weapons or personal belongings of the deceased couple that had gone missing after the attacks.

Of course, in a case as cold as this one, which happened before the era of cell phones and social media, there are bound to be a lot of gaps that memories clouded by time won’t be able to fill in. But in some ways, the absence of much other corroborating evidence may lead to a more pure test of genetic genealogy’s potential. Ultimately, it was his DNA and his DNA alone that made Talbott a suspect. And now the jury will decide if that’s enough to find him guilty. This week they will continue to hear testimony primarily from the investigators who worked the case in the late 1980s. The trial is expected to last until the end of June.

Meanwhile, on the opposite side of the country, another case using genetic genealogy is moving toward trial. In Virginia, 37-year-old Jesse Bjerke has been charged with raping a woman at gunpoint in 2016. Like Talbott, Bjerke was identified by a genetic genealogist at Parabon Nanolabs, using the free ancestry website GEDmatch. But unlike Talbott, Bjerke’s attorneys are now seeking to have the DNA evidence in his case thrown out on the grounds that assembling and testing a genetic profile without a warrant violates the Constitution, as reported by the Washington Post. Prosecutors in that case have until July 3 to file an official response.

Some law experts foresee more legal challenges of this nature, specifically to the use of genealogy website to identify suspects, as the practice becomes more commonplace. But whether the courts find them compelling remains an open question.

Erin Murphy, a law professor who studies forensic DNA technologies at New York University, says that courts tend to treat all DNA tests the same, overlooking the nuances that can compromise people’s privacy. She’s skeptical that they’ll make a distinction between genetic genealogy, which uses hundreds of thousands of gene-coding regions of DNA, and traditional forensic DNA matching, which uses about 20 regions from so-called “junk” areas of the genome. “It’s complete apples to oranges,” she says. “One is taking a picture of someone’s house, and one is rummaging through someone’s house for hours and hours. It should be causing the courts to gasp. But I’ve yet to see any court gasping.”