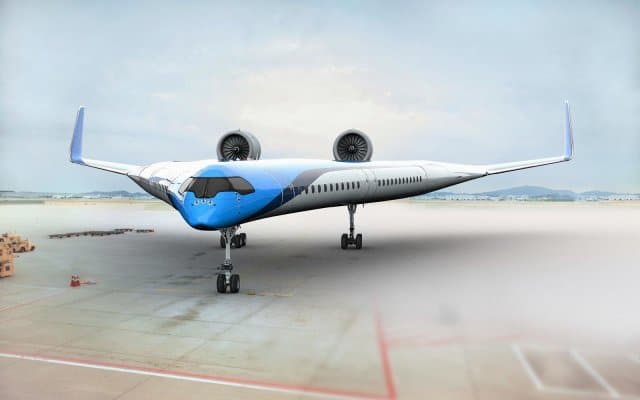 Air travel accounts for a significant chunk of greenhouse gas emissions and other pollutants, and the amount of air travel has risen steadily over the past few decades, with emissions from aviation predicted to grow significantly through 2020 and beyond. Electric passenger planes are in the works, but unlikely to replace our workhorse passenger jets any time soon — which is why efforts like a new type of conventional-fuel aircraft are being backed by KLM Airlines.

The new aircraft design was conceived by designer Justus Benad and is being further realized by a team of researchers at the Netherlands’ Delft University of Technology, per CNN. The look of the aircraft is clearly different from the start, ditching the typical cylindrical tube main fuselage for a “squat slice of pizza” look that extends the body through the wings of the plane.

This beefed-up core holds passengers, fuel and cargo, and through this distribution, which improves the aircraft’s overall aerodynamics, the plane will manage to be 20% more fuel-efficient versus the Airbus A350, which carries approximately the same amount of passengers depending on its configuration.

A savings of 20% in fuel consumption may not seem like much, but over time, and at scale, it could potentially make a huge difference — especially if the pace of electric aircraft development and other alternatives doesn’t pick up. That said, timelines for deployment aren’t super immediate: These could enter service sometime between 2040 and 2050 based on the current development schedule, which isn’t exactly tomorrow.

Testing an all-new design for passenger jets, which basically look like they did when they were first introduced, is obviously not something one undertakes lightly, however. The good news is that the team is hoping to put a scale model into real-world flight testing later this year.