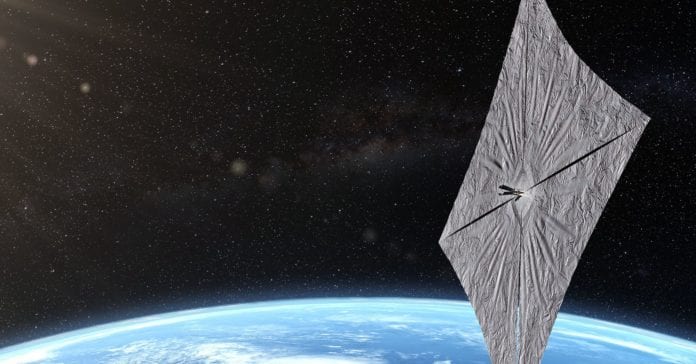 At about 2:30 am ET Tuesday morning, SpaceX is expected to launch its massive Falcon Heavy rocket on its third and most complicated mission from Kennedy Space Center in Florida. Previous Falcon Heavy launches each carried a single large payload—a Tesla roadster and an Arab telecommunication satellite—but this launch will carry two dozen satellites into Earth orbit. The entire mission will last over six hours due to the fact that the rocket’s upper stage must deliver its payloads to three different orbits. You can watch starting about 20 minutes before liftoff at the livestream below.

The satellites onboard the Falcon Heavy will be used to demonstrate new technologies and collect a wealth of scientific data. This includes testing an atomic clock for deep-space navigation and a new, ultrasafe green satellite fuel, studying radiation and space weather, and demonstrating Wi-Fi communication between cubesats and GPS signals for weather forecasts. But arguably the star of the show is the Planetary Society’s LightSail 2, which will navigate its orbit using pressure from light particles hitting the sail.

The LightSail 2 consists of a small cubesat about the size of a loaf of bread that will catch a ride inside the PROX-1, a small satellite designed by students at the Georgia Institute of Technology. The PROX-1 spacecraft will be deployed during the Falcon Heavy’s third and final destination in orbit, which will occur about an hour after launch. After about a week, the satellites deposited in the third orbit will have drifted apart from one another and the PROX-1 spacecraft will deploy the LightSail 2 cubesat using a small spring. After some testing to make sure everything is working correctly, the cubesat will begin to unfurl its mylar sail, which is about the size of a boxing ring and thinner than a human hair.

For at least a month, the LightSail 2 will use pressure from light particles, or photons, to lift itself into a higher orbit. Although photons don’t have mass, they do have momentum. When they strike the solar sail, this momentum gets transferred to the spacecraft. As the spacecraft orbits the Earth, a small flywheel inside the spacecraft will turn the sail to capture these photons, similar to how a sailboat adjusts its jib to travel in a desired direction.

Simulations show that the LightSail 2 should be able to raise its orbit by half a kilometer per day, but its designers say they will consider any measurable altitude increase to be a success. The amount of force the photons will apply to the solar sail is equal to about 9 micronewtons per square meter. To put this in perspective, that’s about equal to the weight of a housefly on your hand on Earth.

If satellites can harness photon pressure for propulsion, it will make navigating the solar system with cubesats far cheaper and simpler by eliminating the need for satellite fuel. Looking to the future, solar sails also open up the possibility of interstellar travel. As a spacecraft travels further from the sun, the solar flux, or density of photons, drops rapidly, so a spacecraft outfitted with a solar sail wouldn’t reach high enough speeds to make interstellar travel possible on human timescales. But if solar sails are propelled using a powerful array of lasers on Earth or the moon, a small spacecraft could feasibly make an interstellar journey. This is, in fact, the goal of Breakthrough Starshot, a plan bankrolled by a Russian billionaire that aims to send the first interstellar probe to Alpha Centauri, our closest stellar neighbor. The LightSail 2 is a small step toward developing the technology that would make that mission possible.

The Planetary Society’s LightSail project has been nearly a decade in the making, but the idea predates the organization. In 1976, four years before he created the Planetary Society, Carl Sagan appeared on The Tonight Show and showed off a “crude model” of a NASA solar sail for Johnny Carson. Sagan envisioned the sail being used to rendezvous with Halley’s comet, and Carson envisioned it being stamped with a giant McDonald’s logo. For better or worse, neither of their visions materialized, but solar sailing remained an integral part of the Planetary Society’s identity thereafter.

“This thing grabbed my heart in the 1970s, and it’s still with me,” says Bill Nye, science guy and CEO of the Planetary Society.

After failing to secure funding from NASA to launch a solar sail, the Planetary Society decided to tackle the project on its own. In the late ’90s it began work on its first version of a solar sail, Cosmos 1, which looked like a giant fan. In 2005 a Russian submarine launched Cosmos 1 into space, but the rocket’s first stage failed and destroyed the solar sail. The Planetary Society pressed on and a decade later launched the LightSail 1 into low Earth orbit. The first LightSail was more of a technology demonstration mission—it didn’t go high enough to surf on sunlight. In retrospect, this was probably for the best. The LightSail 1 mission was plagued with technical problems from the outset, including a faulty battery and problems with the radio communication.

The LightSail 2 mission is only the second time the technology has been tested and the first time it has been used in Earth orbit. In 2010, the Japanese space agency launched IKAROS, which used solar sailing as its only form of propulsion on a mission to Venus and demonstrated that the technology actually worked for the first time. Although Nye and his collaborators commended the design of IKAROS, they said its technology wouldn’t work if the IKAROS spacecraft had stayed in low Earth orbit. To climb to higher altitudes, LightSail 2 had to have a much higher area-to-mass ratio, as well as the ability to rapidly reorient itself toward the sun as it orbited the Earth.

Assuming it works as planned, LightSail 2 will in many ways be the highest-performing solar sail ever launched, but it isn’t likely to hold that title for long. In 2020, NASA is scheduled to launch NEA Scout, a cubesat solar sail that will characterize an asteroid of the type that may one day be a target for future human missions. The NEA Scout cubesat is slated to be a secondary payload on the first launch of NASA’s Space Launch System—if it ever makes it to the pad. The SLS has been plagued with delays and massive cost overrides that have put its future in question. So in the meantime, enjoy the launch of LightSail 2 on a rocket that actually exists.