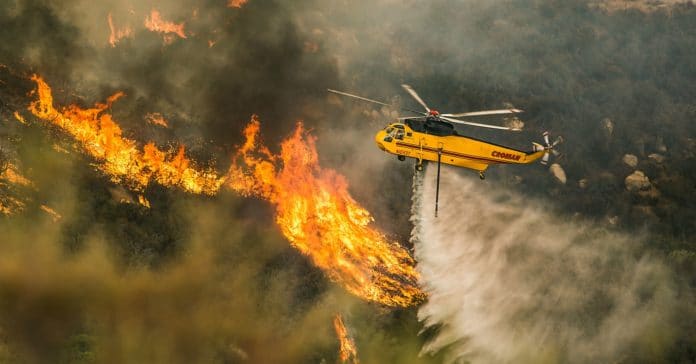 Of all the wildfires that ravaged California in 2018, the Camp Fire was the deadliest. It tore through the difficult-to-reach town of Paradise and killed at least 85 people, destroying the local Feather River Hospital along the way—so just as emergency services were trying to evacuate and tend to the injured, they also had to transport admitted patients.

That moment made real a problem that specialists had been warning about for years. “There were four beds immediately available in the entirety of Northern California for a burn patient. Everyone else was going to have to wing it,” says Tina Palmieri, director of the Firefighters Burn Center at UC Davis, which would receive 10 burn victims from the Camp Fire alone. (Triage and emergency planning allowed for a kind of rejiggering that can add a few beds.) Technically, those four slots in the hospital—attended by teams trained to triage and treat burns—were among just 53 available in all of California.

Across the western United States, wildfires are getting worse—because of climate change-induced heat and drought as well as the encroachment of human beings into what was once wilderness. The so-called wildland-urban interface gets bigger as urban development sprawls outward, and the WUI is where destructive wildfires often start. Fire season is forever on the Burning Earth.

That means charred landscape, destroyed buildings, lost homes, death. And not many medical caregivers know how to deal with that. Corporate medical systems keep hospitals full or nearly full all the time—which means they don’t keep beds open for the mere possibility of burn patients, and they don’t keep the gear on hand to treat them. Doctors and nurses no longer receive much training in treating burns, if they get any. “There are a lot of trauma surgeons, a lot of trauma nurses, a lot of emergency department doctors. There are a lot of prehospital people,” says James Jeng, a burn surgeon at Mt. Sinai Hospital. “But the burn cognoscenti, it’s a small village of mad monks. There are maybe 300 burn surgeons in the United States, and maybe 300 burn nurses.”

So you can see the problem here. Increasing wildfires could mean an increase in serious burn injuries, potentially even mass-casualty burn incidents with dozens or hundreds of victims. In the 20th century, those were rare; the lesson of the 73 major burn incidents across those 100 years is that most people either die or walk away—but those who survive with severe burns are resource-intensive and challenging to treat. The lesson of 21st-century fire disasters is that they’re increasing around the world, and that they tend to be worse than what the local infrastructure can handle. If any of last year’s fires had a lot of burn survivors? “It would only take a few,” says Colleen Ryan, a surgeon at Massachusetts General Hospital and chair of the American Burn Association’s Committee on Organization and Delivery of Burn Care. “Northern California was one house fire away from being completely full.”

Burns and smoke are what kill fire victims. The 25 deaths in the Oakland Hills Fire of 1991, for example, were all related to major burns (and possibly smoke inhalation; it’s difficult to disentangle the two after death). They were people trapped by the fire. Six people made it to hospitals and survived their burn injuries. But in 1991, three of the nine regional hospitals that received casualties from the fire had dedicated inpatient burn units. Two of those hospitals no longer do, and the third has closed entirely. The US has something like 1,800 dedicated burn beds. That’s it.

The rules for triaging burn victims in a mass casualty situation—for determining how to use finite resources to do the most good for the most people—are grim, but simple. Depending on whether you are a glass-half-full or glass-half-empty sort of person, you could call them either “survival tables” or “death tables.” They’re charts, based on two pieces of data, or three if you’re fancy: the victim’s age, the percent of their body burned, and maybe smoke inhalation. Hit too high a number on those metrics during a disaster—when everyone gets an altered standard of care—and you’re likely to receive only comfort, not life-saving treatment. Triage is a cold equation.

But it’s an equation that untrained people may not be able to solve. Estimating the percent total body surface area burned, “% TBSA,” is more difficult than it sounds. The overall number of burn injuries around the world has been on the decline for decades. “Burn triage is something those of us in the field worry about,” Palmieri says. “With the declining incidence of burns overall in the United States, people have less exposure to it, and when you have less exposure you have less experience.”

A lack of supplies and specialists means that it wouldn’t take many burn victims to turn a wildfire into a resource-straining medical disaster. Treating burns requires an entire team, including dieticians, pharmacists, physical therapists, and so on. And wildfire burns are a special case of a special case. People caught in them “usually can’t get to medical care for a while, so you get delayed treatment. That causes them to be more dehydrated, and that dehydration exacerbates the wound,” says Palmieri, an Air Force veteran and triage expert. “Unlike an explosion or a house fire where you catch on fire and the fire is put out immediately, in a wildfire you’re surrounded by heat, and then you can also catch fire.”

Or, as Palmieri—an Air Force veteran and triage expert—put it to me after a recent wildfires conference at UC Davis, “first you bake, and then you broil.”

In a perfect world, the economics of health care would account for the possibility of a huge influx of burn patients—or any other kind of patients, really. It’s called “surge capacity.” Just quadruple the number of burn caregivers and burn beds. “Not so fast. You can’t do that. Our medical system is economically driven. It ain’t happening,” Jeng says. He’s the chair of the disaster subcommittee of Ryan’s group.

Supply and demand work against the creation of surge capacity. So now the American Burn Association is working with the US Department of Health and Human Services to figure out how to build burn injuries into regional and local disaster plans, to help individual hospitals share expertise and build out emergency supply chains. “We’re kind of the darling of HHS because we’re small and nimble, and we’re real friendly, and HHS sees that we’re a strategic bottleneck,” Jeng says.

This summer, HHS is working with Massachusetts General Hospital and the University of Nebraska Medical Center to run exercises on how to use the system as it currently exists—using telemedicine to spread out burn surgeons’ expertise, for example, or just figuring out triage. “They’re simulating a burn event where they can figure out the criteria for how to determine which patients go where, triage them, and how they would get the right resources to those patients,” says Melissa Harvey, director of the National Healthcare Preparedness Program at HHS. And HHS is requiring the 361 health care coalitions in the US—regional hospitals, public health agencies, and so on—to add plans for burn casualties to their disaster response plans by June of 2021 (or risk losing their share of $265 million in federal grant money dedicated to hospital preparedness).

Jeng, a Navy veteran, is also working on improving what medical professionals know about burn treatment. He edited a set of four “austere guidelines” for burns, journal articles that he described in a preface as advice on “effective burn care in a post-apocalyptic environment.” Sure, it’d be great to get the kind of oral rehydration solutions and silver-impregnated dressings that the military uses into the same public first aid kits that now contain automatic defibrillators and tourniquets, or into the country’s strategic national stockpile of supplies.

But the real answers may be buddy care and improvisation, like the Australian surgeons who responded to a mass-casualty bombing in Bali in 2002 by wrapping burns with store-bought plastic wrap. As Jeng points out, when you don’t have antibiotic creams, even honey and yogurt can help. Anything that keeps people alive for the 72 to 96 hours it’ll take for help to arrive after a disaster is a good thing. “Buddy care can time-smear the pathophysiology of major thermal burns and allow more survivors,” Jeng says. “Time-smearing their need to enter formal medical care, that’s the trick.” Short of rebuilding the American healthcare system from scratch, apparently we’ll just have to figure out how to take care of each other.