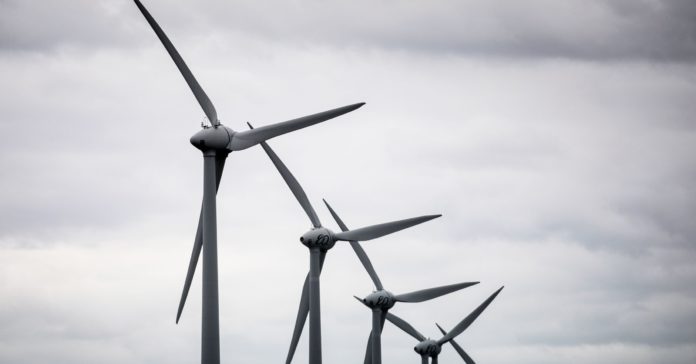 It’s amazing that we can get electrical power just from the wind, but that’s exactly what happens with a wind farm. It’s a collection of wind turbines in a particular location with abundant wind. And as with many things, bigger is better. The Hornsea Wind Farm, for example, is being built 75 miles off the coast of Yorkshire, England, and upon completion it is expected to be the biggest offshore wind farm in the world. These are some big wind turbines: The video lists the turbine diameter as 154 meters (more than 500 feet).

But here’s the part I’m interested in. They claim that just one turn of these giant wind turbines can generate enough energy to power a house for a whole day. You know what comes next right? An estimation. Let’s see if the numbers add up for this claim.

I suppose we should start with the fundamental physics principles that make this wind turbine create electricity. Like most other methods of generating electricity, it involves turning a coil of wire in a magnetic field. When a changing magnetic field passes through a coil it produces an electric current. But then how do you get that coil to turn? For a wind turbine, the air moving into the large blades pushes them in a rotating motion.

Of course you don’t have to use wind to turn a turbine. You could use running water by placing some type of propeller-based blades in moving water like a stream or from a dam (hydroelectric power plants do this). Another popular option is to heat up water and let the steam turn a turbine. This is how coal and natural gas power plants work. It’s also how a nuclear power plant operates. The only difference between nuclear and coal power production is that one burns a fossil fuel to heat up water and the other uses a nuclear reaction. The turbine parts are essentially the same. It’s crazy if you think about it. Really, the only power generation method that’s different is a solar panel. That works with a different method.

That’s great and all, but how do you estimate the power (and then the energy) from a wind turbine? All of the energy comes from the kinetic energy of moving air. Kinetic energy can be calculated as:

In this expression, m is the mass of air and v is the air speed. Let’s assume that the air enters the turbine with a speed of v1 and then leaves at a slower speed of v2. This decrease in speed means a decrease in kinetic energy—and it is that energy that eventually turns into electricity. The speeds might be easy to estimate, but what about the mass of the air?

Suppose that we have a large cylinder of air that enters the turbine. The cross-sectional area of this cylinder is a circle the same size as the rotating props and the length of the cylinder is just a value—for now I will call it L. This diagram should help.

This just comes from the definition of velocity in one dimension. Now instead of estimating the length, I can estimate the time interval. Remember we are trying to find the energy from one rotation of that wind turbine. I can just look at the video and see an actual rotating turbine. My estimate is that it takes about 4 seconds to make one rotation.

There are only a few more things to estimate:

Now for the calculation. Here it is (you can change the values if you disagree with my estimates). If you want to see and change the code, click the “pencil” icon. Click the “play” button to run it.

So, that didn’t work. Using my values, the one turn of the wind turbine creates 291 watt-hours (a unit of energy) but a house uses about 48 thousand watt-hours. I’m off by a factor of 100 or so. That means you would need 100 turbines (or 100 rotations) to get enough energy to run a house for a day. OK, so what went wrong? There are a couple of options. Obviously, my estimations could be off. But why would they be off by a factor of 100? Even if I double the windspeed and put the final air speed at 0 m/s, it’s still not enough energy.

The other option is that there was some error in the video. Hey, it’s possible. We all make mistakes. Maybe they meant to say that one rotation was enough to run a house for 2 hours—or something like that. Who knows. What I do know is that even though my calculation doesn’t agree with the video, wind turbines can produce quite a bit of energy.