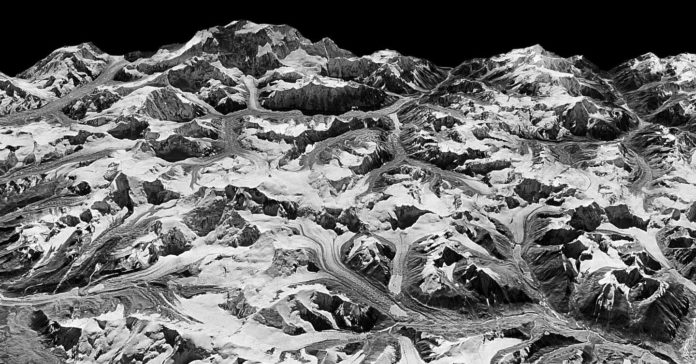 During the height of the Cold War, a telescope-shaped American spy satellite code-named Hexagon circled the globe snapping high-resolution photographs of forests, mountains, and perhaps a few Russian military bases. From time to time, the satellite would eject metal canisters containing the film of the imagery. The canister would deploy its parachute, and high-flying spy planes would pick it up midair.

Now a team of scientists has stitched together these once-classified analog images to form a three-dimensional digital model of the Himalayas as they existed more than 40 years ago. By comparing the model with images taken today, researchers found that the mountain’s glaciers are melting at double the rate since 2000 as during the period of 1976 to 2000, and that a warming climate is the culprit.

While scientists have documented melting of individual glaciers in the Himalayas, this new study looks at a 1,250-mile-wide range across Nepal, Bhutan, India, and China, and reveals some disturbing news. “The fact we can look at ice losses over this long of a time scale and see most of the glaciers have lost similar amounts of ice really indicates there is one overarching factor causing this,” says Josh Maurer, a graduate student at Columbia University’s Lamont-Doherty Earth Observatory and author of a new study out today in the journal Science Advances. “Global temperature rise is the only one that makes sense.”

Maurer said he and his team eliminated two other possible causes for the rapid melting: tiny particles of black soot from Asian factories that land on the snow, absorb solar radiation, and melt the ice; and less rainfall in the high mountains. The study looked at images of 650 individual glaciers and found they have been losing a foot and a half of ice each year since 2000, threatening water supplies for millions of people who rely on Himalayan meltwater throughout large parts of Asia. A similar study released earlier this year by a group of more than 250 researchers predicted the Himalayas could lose two-thirds of their glacial ice by 2100. But until this year, most researchers have focused on individual mountains or specific regions, and as a result have not pinpointed the overall cause of the melting.

The Columbia team’s report is more bad news for a region that is likely to be hit by stronger coastal flooding from tropical monsoons that arise in the Indian Ocean, and less fresh water draining from the mountains. This double-whammy from climate change is already underway, and waterways such as the Ganges River are most at risk, according to Joerg Schaefer, a climate geochemist at Lamont-Doherty and another author of the paper.

More than 800 million people in South Asia rely on seasonal Himalayan runoff for irrigation, hydropower, and drinking water. “In 10 years, the conditions will change the hydrology of these huge rivers” like the Ganges, Schaefer says. The loss of glacial meltwater “has impacts on agriculture, on energy, given the huge expansion of hydropower in India.” Schaefer adds he and other scientists have been meeting with policymakers in the region to discuss what they should do about their results.

Rapidly melting glacial water poses another more unpredictable danger as it gets blocked by piles of rubble and forms glacial lakes that can burst and flood communities downstream. These glacial lake outburst floods have killed thousands of people in the Andes, Himalayas, and Alps during the past century.

As for Mount Everest, which was part of the study area, the authors say they expect the mountain’s glaciers won’t melt in the next few decades, but trails will likely be more difficult to traverse with falling rocks and bigger streams to cross as the ice continues to melt. Mountaineers say climbing routes in the Himalayas will get tougher as glaciers that keep the rocks together are now retreating, fragmenting, and melting.

One researcher says using Cold War satellite images was a clever scientific trick. “Other people used [the images] on a case-by-case, or mountain-by-mountain basis, but covering the entire Himalayas was quite a feat,” says Jeffrey Kargel, a senior scientist at the Planetary Science Institute in Tucson who was not involved in the study.

Both lead author Maurer and his advisor Schaefer have hiked through the Himalayas for the past few years to collect data about the fate of the world’s highest mountain range. Schaefer believes their research on melting glaciers will affect millions of people. “We have to prepare the societies living there with realistic predictions of what this landscape will look like in 10 or 20 years,” Schaefer says.

Rebuilding the glaciers and reversing the melting waters will take a massive effort not only to cut down on emissions, but also by somehow pulling carbon out of the air, he adds: “You have to cool the planet.”