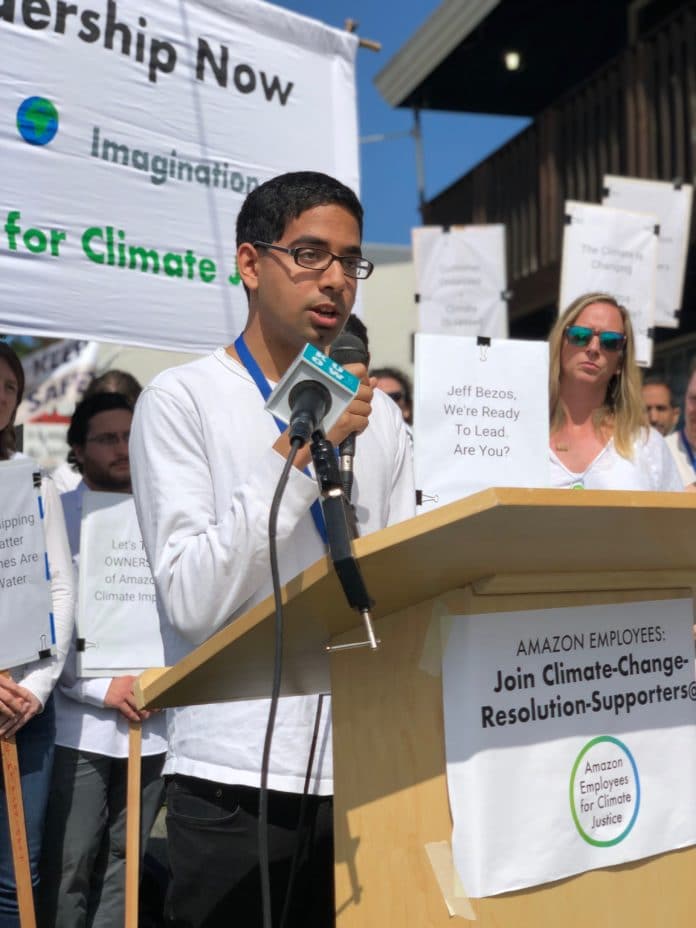 Nearly 8,000 Amazon employees, many in prestigious engineering and design roles, have recently signed a petition calling on Jeff Bezos and the Amazon Board of Directors to dramatically shift the giant company’s approach to climate change.

By deploying a kind of corporate social disobedience such as speaking out dramatically at shareholders meetings, and by engaging in a variety of community organizing tactics, the “Amazon Employees for Climate Justice” group has quickly become a leading example of a growing trend in the tech world: tech employees banding together to take strong ethical stances in defiance of their powerful employers.

The public actions taken by these employees and groups have been covered widely by the news media. For my TechCrunch series on the ethics of technology, however, I wanted to better understand what participating actively in this campaign has been like some of the individuals involved.

How are employees in high-pressure jobs balancing their professional roles and responsibilities with being actively, publicly in defiance of their employers on a high-profile issue? How do leaders in these efforts explain the philosophy underlying their ethical stance? And how likely are their ideas to spread throughout Amazon and beyond – perhaps particularly among younger tech workers?

I recently spoke with a handful of the Amazon employees most actively involved in the Employees for Climate Justice campaign, all of whom inspired me– in similar and different ways. Below is the first of two interviews I’ll publish here. This one is with Rajit Iftikhar, a young software engineer from New York who moved to Seattle to work for Amazon after earning his Bachelor’s of Engineering in Computer Science from Cornell in 2016.

Rajit struck me as a humble and precociously wise young man who could be a role model — though he seems to have little interest in singling himself out that way — for thousands of other software engineers and technologists at Amazon and beyond.

Greg Epstein: Your personal story has been key to your organizing with Amazon Employees for Climate Justice. Can you start by saying a bit about why?

Rajit Iftikhar: A lot of why I care about climate justice is informed by me having parents from another country that is going to be very adversely affected by [climate change]. Countries like Bangladesh are going to suffer some of the worst consequences from climate change, because of where the country’s located, and the fact that it doesn’t have the resources to adapt.

Bangladesh is already feeling the effects of climate crisis; it is much harder for people to live in the rural areas, [people are] being forced into the cities. Then you have the cyclones that the climate crisis is going to bring, and rising sea levels and flooding.

So, my background [emphasizes, for me] how unjust our emissions are in causing all these problems for people in other countries. And even for communities of color within our country who are going to be disproportionately impacted by the emissions that largely richer people [cause].