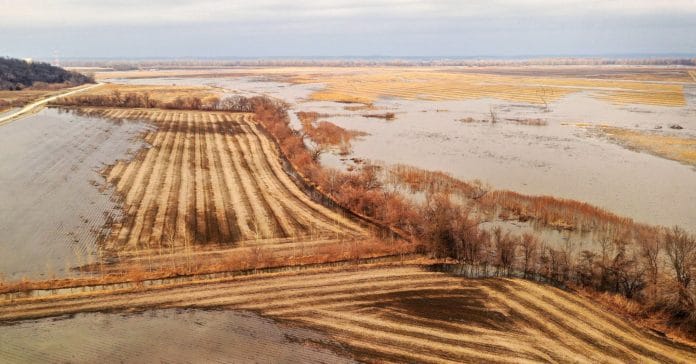 Fierce storms lashed across the central US this week, unleashing hundreds of powerful tornadoes that carved a path of destruction through parts of Missouri and Oklahoma Wednesday night, and left at least three dead. While the worst of the violent winds has passed, the region is now bracing for massive flooding, following record amounts of rain brought by the severe weather system and with more expected over the weekend. And it’s coming on the heels of the wettest 12 months the US has seen since record-keeping began in 1895.

That’s according to the National Oceanic and Atmospheric Administration, which earlier this year predicted that two-thirds of the states in the lower 48 would risk major or moderate flooding between March and May. “This is shaping up to be a potentially unprecedented flood season, with more than 200 million people at risk for flooding in their communities,” Ed Clark, director of NOAA’s National Water Center said in the agency’s spring outlook report.

So far, it’s proven prescient—with rivers from North Dakota east to Ohio and south to Louisiana all overflowing their banks in recent weeks. The damage to homes, businesses, and farms is likely to rise into the hundreds of millions of dollars.

Scientists say it’s too early to tell to what degree this particularly relentless spring storm season is the result of human-induced climate change. But they agree that rising temperatures allow the atmosphere to hold more moisture—about 7 percent more for every 1 degree rise in Celsius—which produces more precipitation and has been fueling a pattern of more extreme weather events across the US. And perhaps more than any other part of the country, the Midwest has had its capacity to store excess water crippled by human enterprise.

We tend to focus on how coastal cities, with their sprawling miles of pavement and rain-grabbing skylines, turn hurricanes and atmospheric rivers into deadly urban flash floods. Or how they’ll get swamped first by sea-level rise. Scientists too have focused their efforts on understanding how western watersheds, with their cycles of moisture whiplash, will respond to a warmer world. But climate change will bring more moisture to the middle parts of the country too, and after decades of draining wetlands and clearing forests for agricultural use, those changes to the timing, type, and amount of precipitation will fall on a system already profoundly altered in ways that make flooding much more likely.

In 2015, researchers at the University of Iowa parsed historical records of peak discharges from more than 700 stream gauge stations across the Midwest. Their analysis, reported in Nature, found that between 1962 and 2011, the magnitude of flood events hadn’t changed much. At a third of the locations, however, the number of floods was trending upward significantly.

More recent work, published in February by scientists at the University of Notre Dame, shows that floods aren’t just getting more frequent—they’ll also get more powerful in the future. Using a statistical method to blend data from global climate models with local information, the researchers predicted that the severity of extreme hydrologic events, so-called 100-year floods, hitting 20 watersheds in the Midwest and Great Lakes region will increase by as much as 30 percent by the end of the century. The approach, called “Hybrid Delta downscaling,” has been used to look at hydrological dynamics in other parts of the country before, but it was never applied to the Midwest. “What we’re seeing is that the past really is not a good predictor of the future,” says the study’s lead author, Kyuhyun Byun. “Especially when it comes to extreme weather events.”

In Byun’s case, the evidence is as much in his computer simulations as it is in his own waterlogged backyard. In South Bend, Indiana, where Notre Dame is located, the city is still recovering from back-to-back biblical deluges—a 500-year flood last spring preceded by a 1,000-year flood in 2016 that broke all historical records. Fellow South Bender Mayor Pete Buttigieg has referenced the series of extreme weather disasters on the presidential campaign trail, linking them to climate change. “It’s not just happening in the North Pole, it’s happening in communities like mine,” he told the Late Show host Stephen Colbert in February. “That’s an emergency.”

Besides all the damage to homes, businesses, and municipal infrastructure, increasingly frequent flooding events in the Midwest would have a huge impact on the nation’s ability to produce food. Wet fields make it difficult for farmers to operate their large, heavy planting machinery without getting stuck. And seedlings struggle to develop root systems when there’s too much moisture in the ground.

Soggy weather and uncertainty over President Trump’s trade war have combined this year to keep farmers out of their fields. According to the US Department of Agriculture’s latest crop progress report, farmers have planted just 49 percent of their intended corn acres for 2019, nearly half the amount they usually average at this time of year. Soybean plantings are down to just 19 percent of acres, compared with the 47 percent average. In Illinois, which is the second-biggest producer of both corn and soy, the soil is so saturated that moisture levels are approaching the 99th percentile statewide. Farmer there have planted just 24 percent of corn acres, and 11 percent of soy. Super-soaked spring soils, unplanted fields, record-rising rivers, runaway barges—this is in all likelihood what climate change looks like for the middle of the country.

Updated 05-29-19, 3:20 pm EST: This story was updated to provide more information about the type of downscaling technique used.

Your Swimming Pool Red-eye Is NOT From Chlorine, It’s From Urine

GizmoCrazed - June 29, 2015 0
In the modern day, redeye is the new deal; it is an irritating feeling one gets in the middle of and after swimming in...

CES' sexism problem is about more than booth babes and pink...