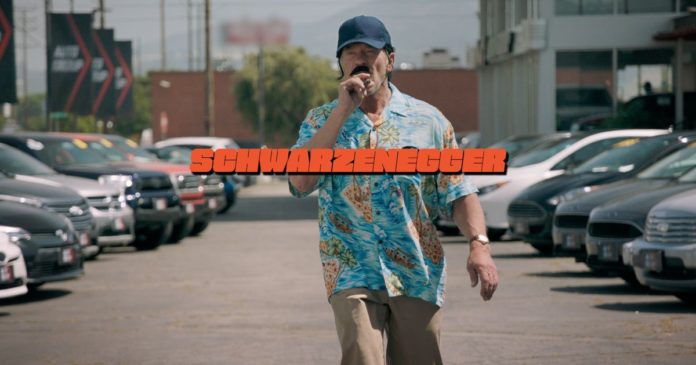 Except it’s — surprise! — former California governor, body builder, and movie star Arnold Schwarzenegger with a fake mustache and wig. He’s just pretending to be a salesman obsessed with muscle cars that burn tons of gas as part of a campaign to get more people informed about electric vehicles.

“We need to get off fossil fuels as quickly as we can,” the governator said in a phone call this week.

The tongue-in-cheek video is part of EV coalition Veloz’s “Kicking Gas” and Electric For All campaign to bring more electric cars to California and beyond. The organization works with automakers, utilities, government agencies, charging networks, and other transportation groups to raise awareness about electric vehicles.

Yes, there’s a healthy dose of self-deprecating humor about Schwarzenegger’s predilection for big cars and roles as tough characters — he was literally The Terminator. One of his reps said in a call that a serious video “isn’t as effective as going ridiculous and putting a mustache on Arnold.”

California, while ahead of other states, still has work to do if it’s to reach its goal of 5 million zero-emission cars on the road by 2030. Mary Nichols, chairwoman of the California Air Resources Board said, “We know we need even larger numbers if we’re going to reach our air pollution or climate goals.”

Schwarzenegger “greened” his fleet of fossil-fuel Hummers into hydrogen- and bio-fuel vehicles years ago and even electrified a Hummer. He also converted his Mercedes-Benz G-Class “G-Wagon” into an electric SUV. He’s aware not everyone can convert $100,000 vehicles, so he wants more automakers to offer affordable electric options.

As governor, he was behind the state’s law to reduce greenhouse gas emissions to 1990 levels by 2020. Still today he spreads the message about pollution and its negative health impacts. “There’s no reason why you should use a product that’s so harmful to your health,” he said about gas cars. “Let’s get off it now.”

“No matter how serious the subject is, everything has a humorous side to it,” Schwarzenegger said about the “Kicking Gas” video and electric cars.

“It’s really fun,” he said about his electric Hummer. “It’s amazing how much power you can get with electric cars.” He recently drove to Las Vegas and was reminded how quiet, fast, and powerful electric can be. His daughter drives a Tesla, he said.

So while it takes a while to get used to electric after decades of gas cars, reflecting on his weight-lifting past, he said it’s just like athletes who said they’d never train on a weight machine instead of with barbells.

“It’s the same with alternative-fuel vehicles,” he said. “It’s the right thing to do.”

Along with social media posts, the “Kicking Gas” campaign will soon have 34 billboards along major California highways.