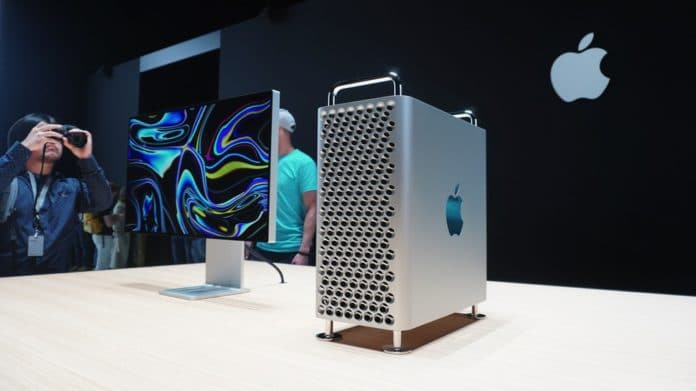 We finally got a good look at the new Mac Pro launching this fall and it’s as monstrous as Apple boasted about during its announcement at WWDC 2019.

With a design that throws it back to the old “cheese grater” aluminum tower, the new Mac Pro, which starts at $5,999, and the $4,999 Apple-designed 32-inch Pro Display XDR monitor are quite the pair to soak in.

Apple didn’t let anyone touch the new Mac Pro, but we got to ogle it from all angles and check out a few demos of the most powerful Mac chewing through Logic audio streams and 8K-resolution Final Cut Pro X projects with ease.

The first thing you should know about the new Mac Pro is that it’s probably not your next machine unless you are the kind of professional who needs the ridiculously powerful performance it packs.

I mean, it sure would be nice to have a Mac Pro and its beefy Intel Xeon processor with up to 28 cores, up to 1.5 terabytes of RAM, and up to two Radeon Pro Vega II Duo graphics cards (the most powerful graphics card according to Apple), but most people will not need it.

The new Mac Pro and the Pro Display XDR itself are nothing short of overkill, which is exactly what professionals need, not just for today but years down the road.

Seeing the new Mac Pro up close brought back fond memories of the old pre-2013 “trash can” Mac Pro. The original was a gorgeous, sleek aluminum tower with tons of expansion slots.

Comparing the two machines, it’s so obvious they share similar DNA. Both are metal towers with handles on top for easy transport and both come with a boatload of expansion. In other words, Apple is giving professionals what they really want: a big ol’ box of a computer.

Specs aside, the new Mac Pro and Pro Display XDR can be described in two words: very hole-y. There are holes covering the entire front and back of the Mac Pro’s aluminum chassis and holes all along the backside of the Pro Display XDR.

The holes on the front of the Mac Pro allow the three internal impeller fans to push air over all of the computer’s components — the CPU, GPU, memory, storage, etc. — and then release it out the through the back. Apple says the design not only allows the machine to stay cool, but also run virtually silently; the Mac Pro should be as quiet as an iMac Pro.

On the top of the Mac Pro is a “D-ring latch” in the center that flips up. Twist it and the entire aluminum chassis can be lifted up to get to the machine’s components. 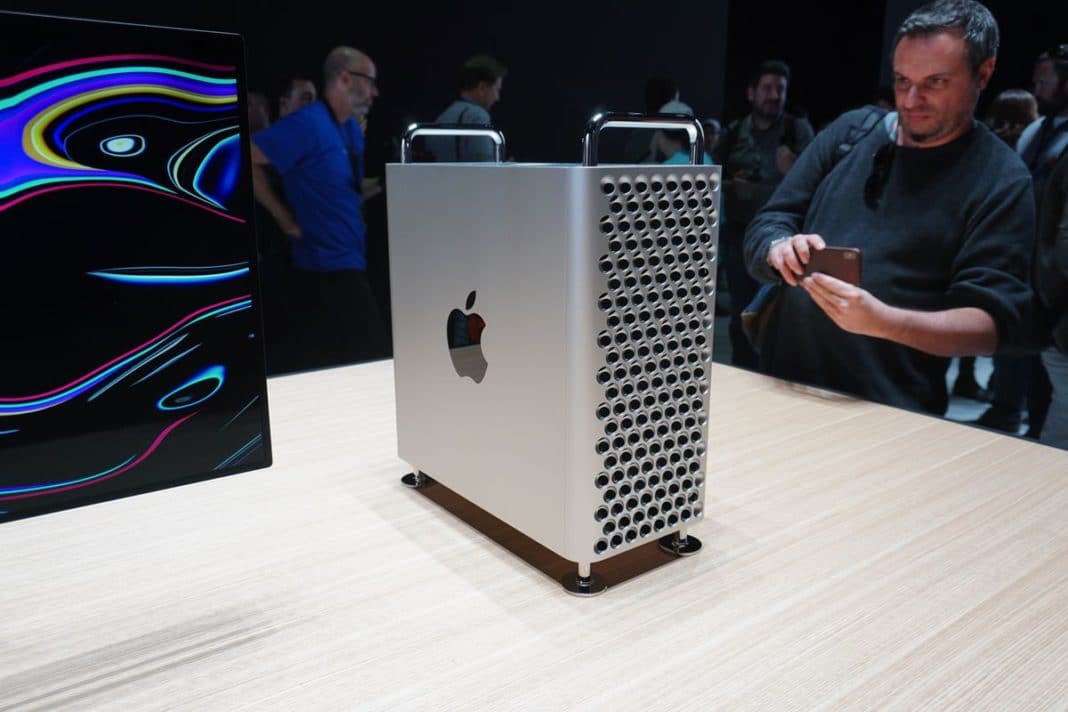 That’s a lot of holes.

Yep, the back of the new Mac Pro has more holes as well. Easy access to ports, but holes everywhere. 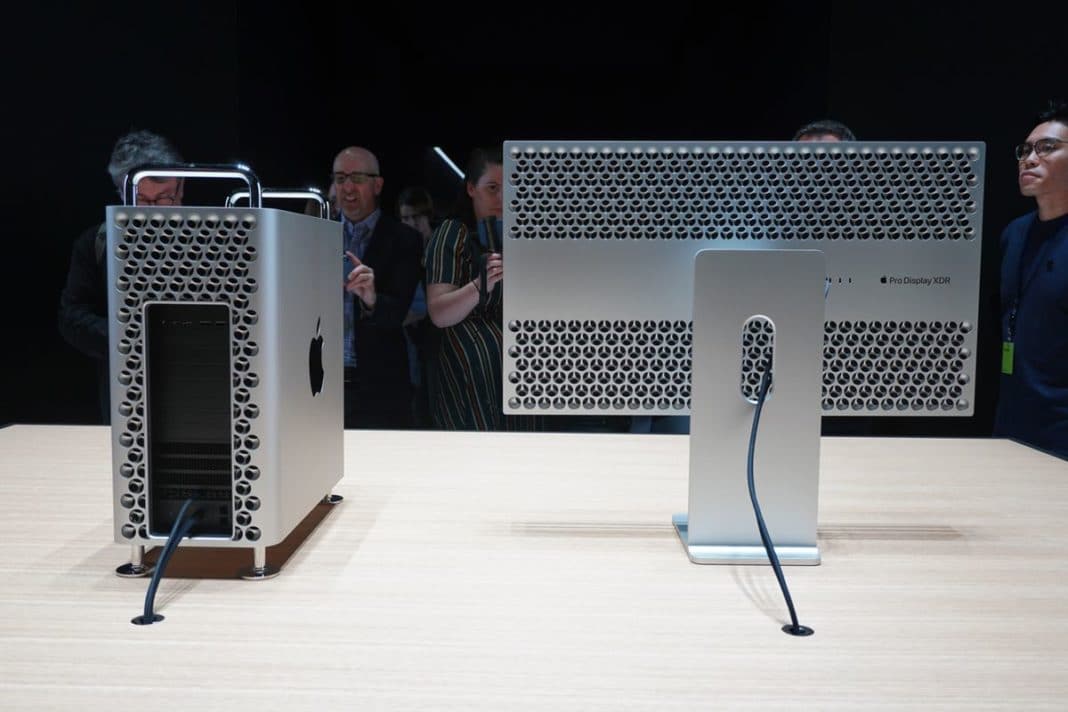 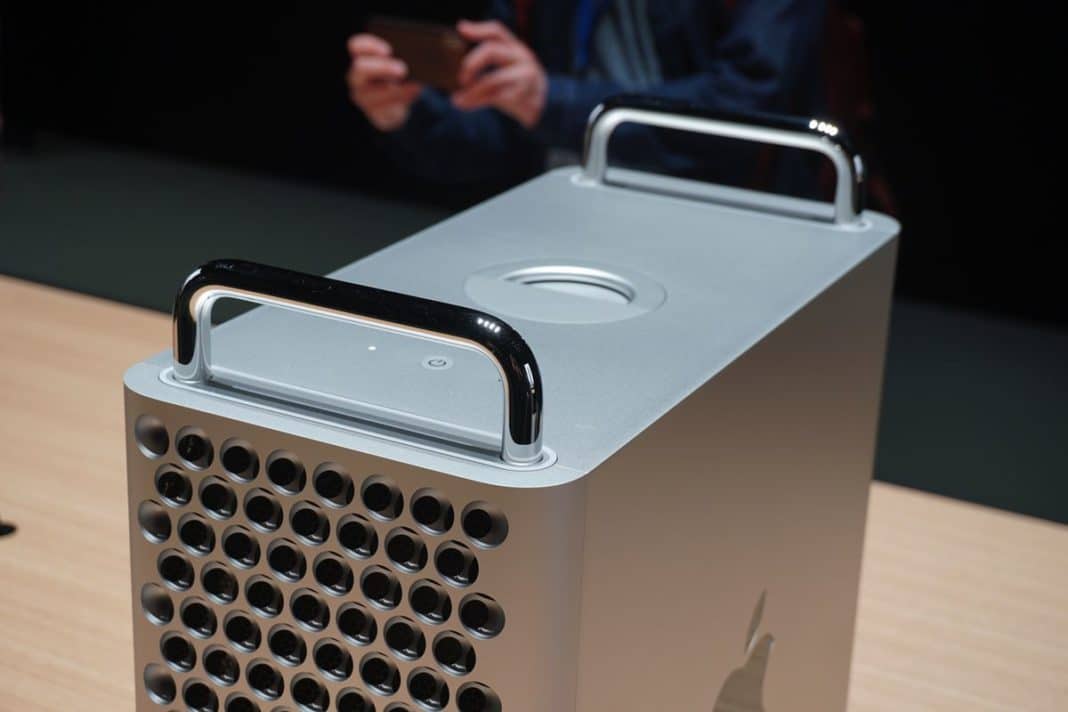 The handles are stainless steel. 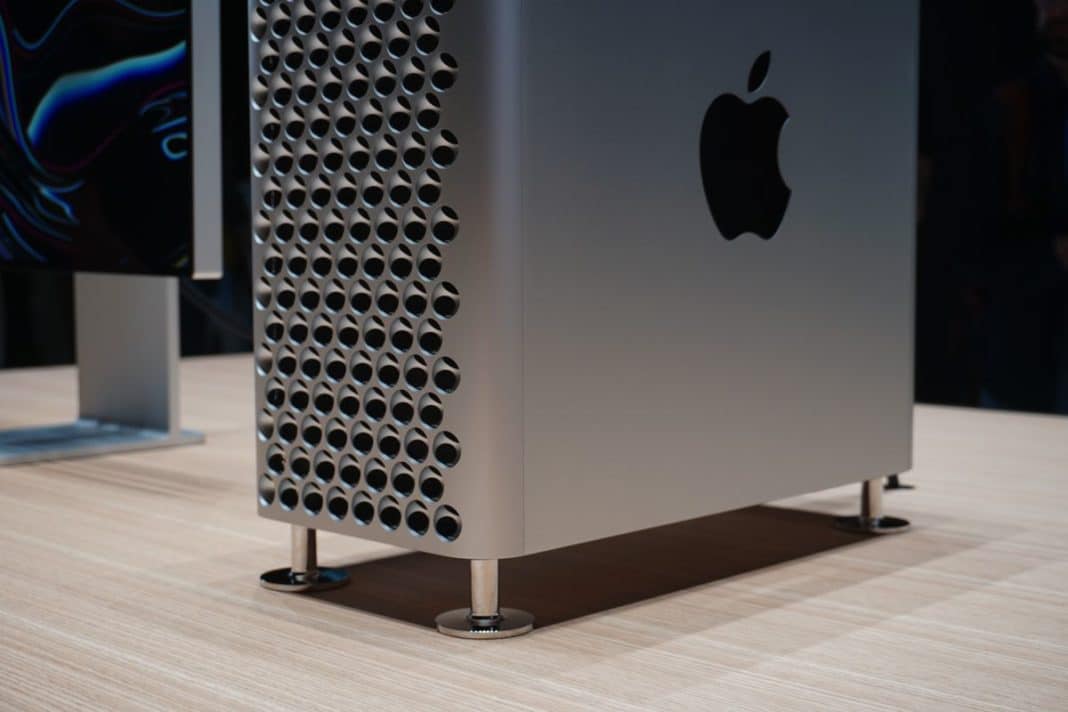 Check out the stainless steel legs that keep the Mac Pro raised off surfaces.

Up top, you’ll find only a power button and two Thunderbolt 3 USB-C ports. 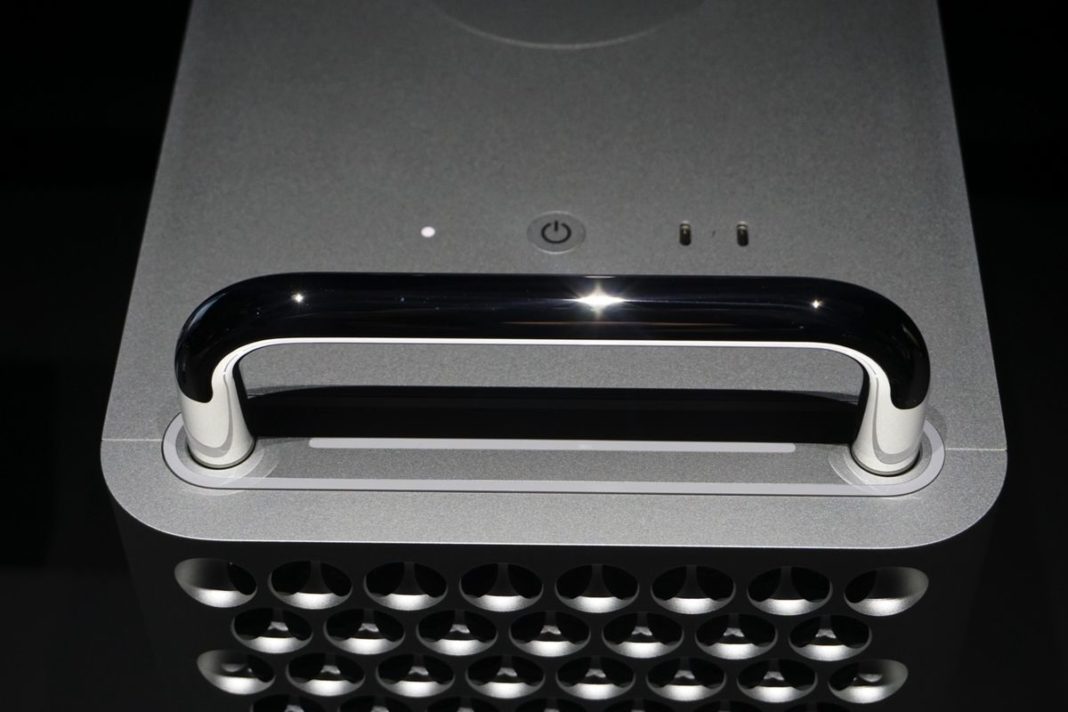 Only two Thunderbolt 3 USB-C ports on the top of the Mac Pro.

Apple said Mac Pro owners will be able to kit out their towers with wheels for easy mobility. What do Apple-designed wheels look like? Like this: 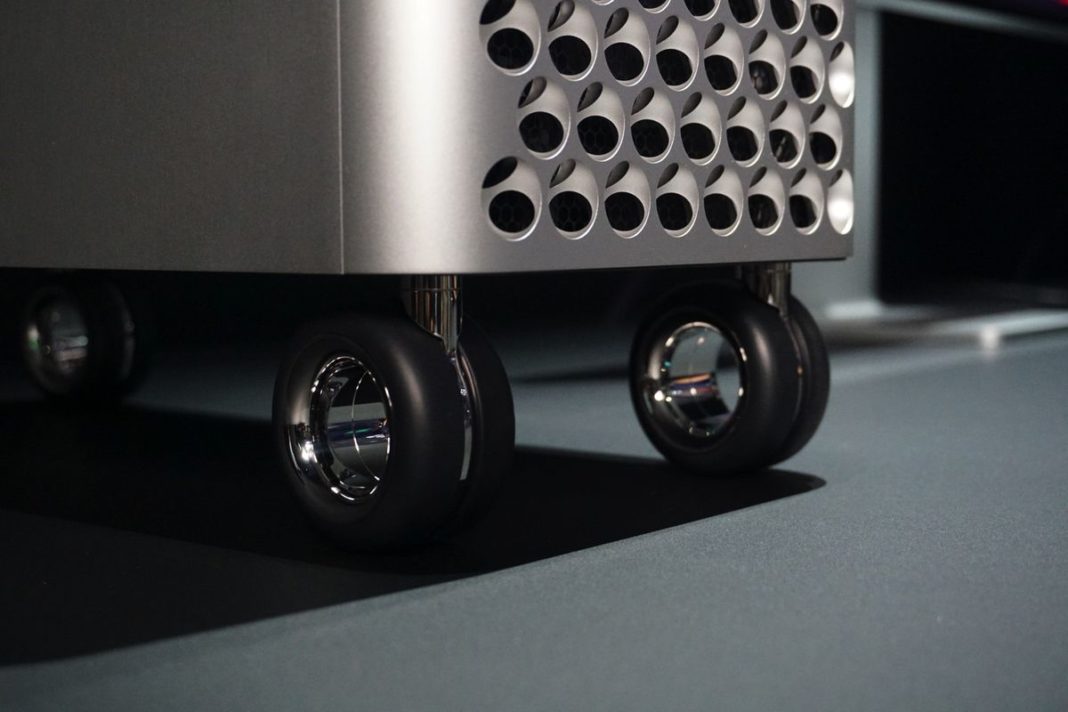 Of course, Apple-designed wheels are gonna be super minimalist.

The wheels, I’m told, screw right into place after the regular legs are removed. They kinda make the Mac Pro look like a roller carry-on. 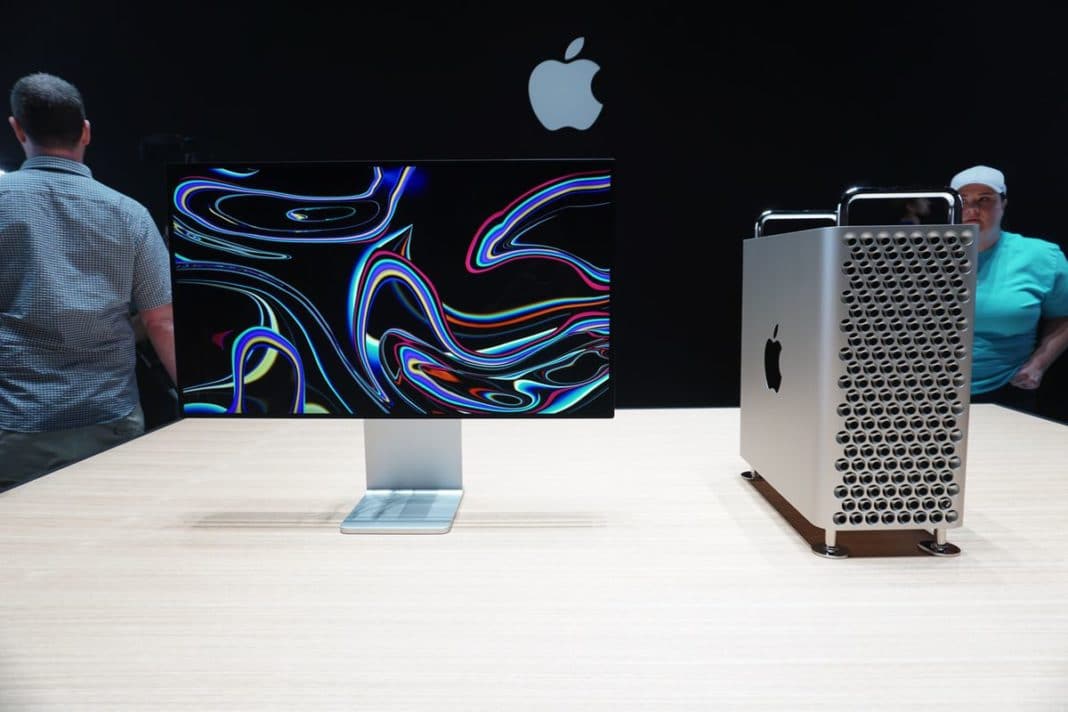 The Pro Display XDR is equally stunning — from the front at least. While I’m not completely in love with all the holes adorning the back, the 32-inch 6K Retina panel really is gorgeous.

The 9mm bezels are super narrow and the screen comes in two models: glossy glass and a matte finish. Display geeks will appreciate the insane 6,016 x 3,384 resolution, 10-bit color, 1,000-nit brightness, and unreal 1,000,000:1 contrast ratio, but what people really wanna know is if any of this stuff really makes a difference.

After looking at the Pro Display XDR in Apple’s showcase area and seeing photos on it compared with other professional HDR-ready displays — some of which cost $43,000 — I can tell you all the jargon adds up to incredible picture quality.

Unlike other professional HDR displays, Apple’s Pro Display XDR can maintain 1,000 nits of brightness indefinitely so that the entirety of an image or video displayed on it is properly lit. For professionals, such as photographers and video editors, this is a very big deal.

To create such a bright display, Apple says it had to use 576 blue (yes, blue) LEDs to illuminate the pixels. But it’s not just a bright backlight at work here. There’s a lot of clever behind-the-scenes engineering involving complicated-sounding diffuser plates and color correction sheets that convert the blue light into white on the fly so that all the viewer sees is pixel heaven.

New things we learned about the screen: It’s got the same True Tone technology found inside of iPhones and iPads that’s used to the display’s color temperature based your environment. 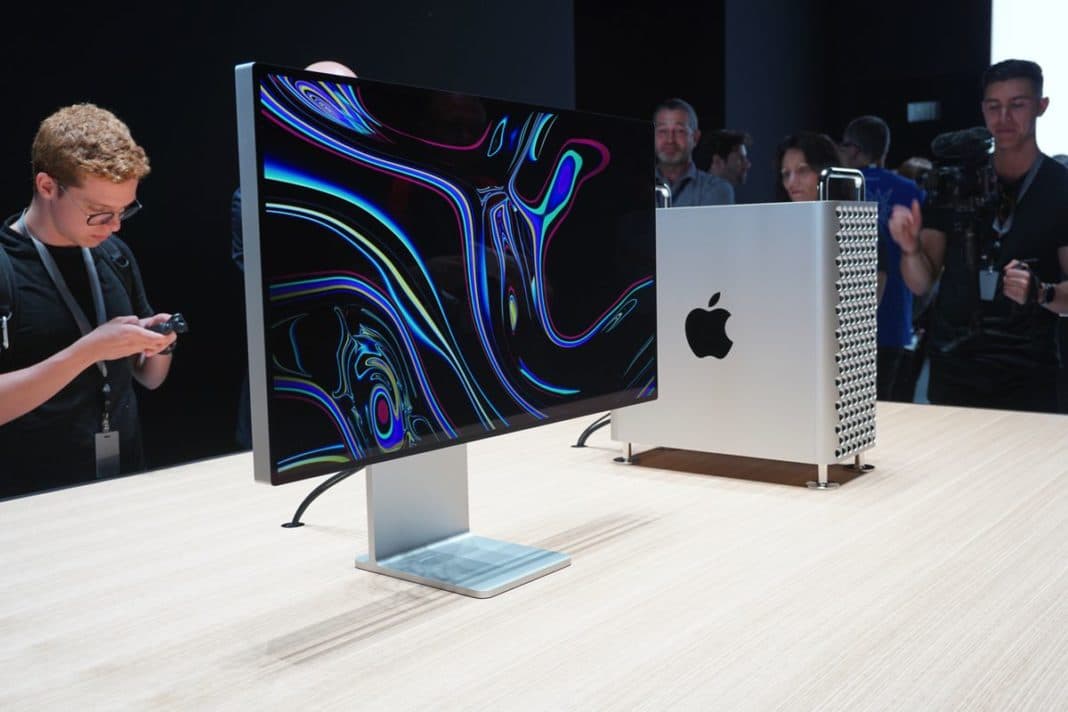 The image quality is to die for.

Perhaps the most disappointing thing about the new Pro Display XDR is that its fancy stand is sold separately for another $999. 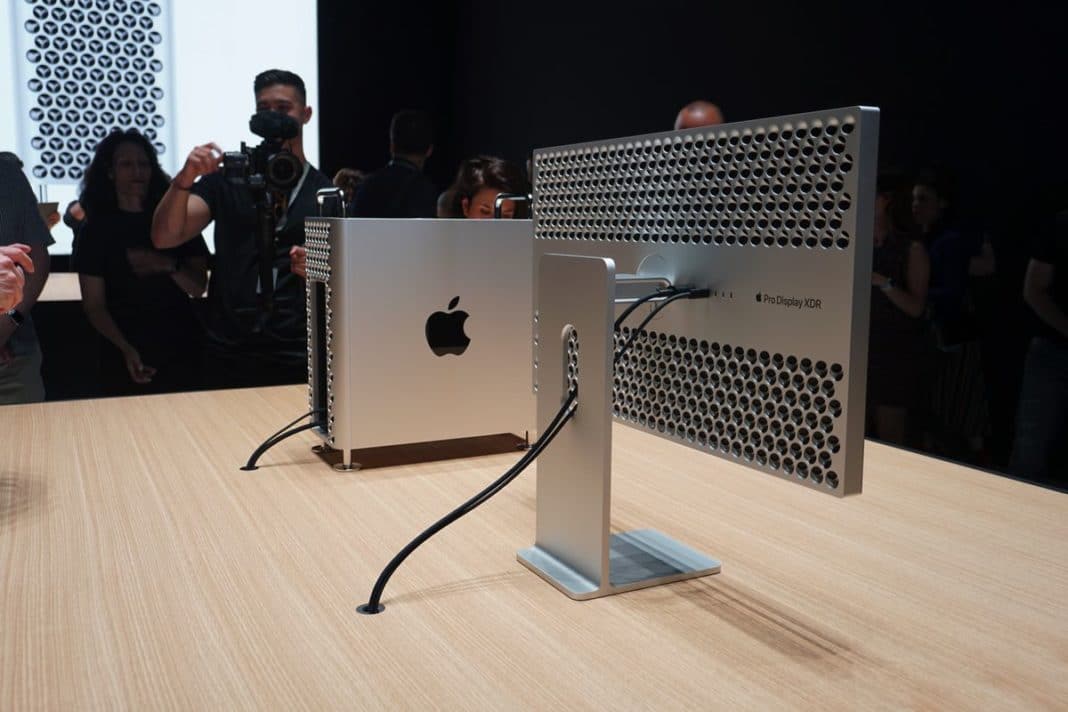 Sure, maybe you’re gonna mount the display via VESA to a wall or attach it on a desk arm, but it feels like Apple’s cheaping out on the stand here. A $5,000 monitor should come with a stand included in the box. 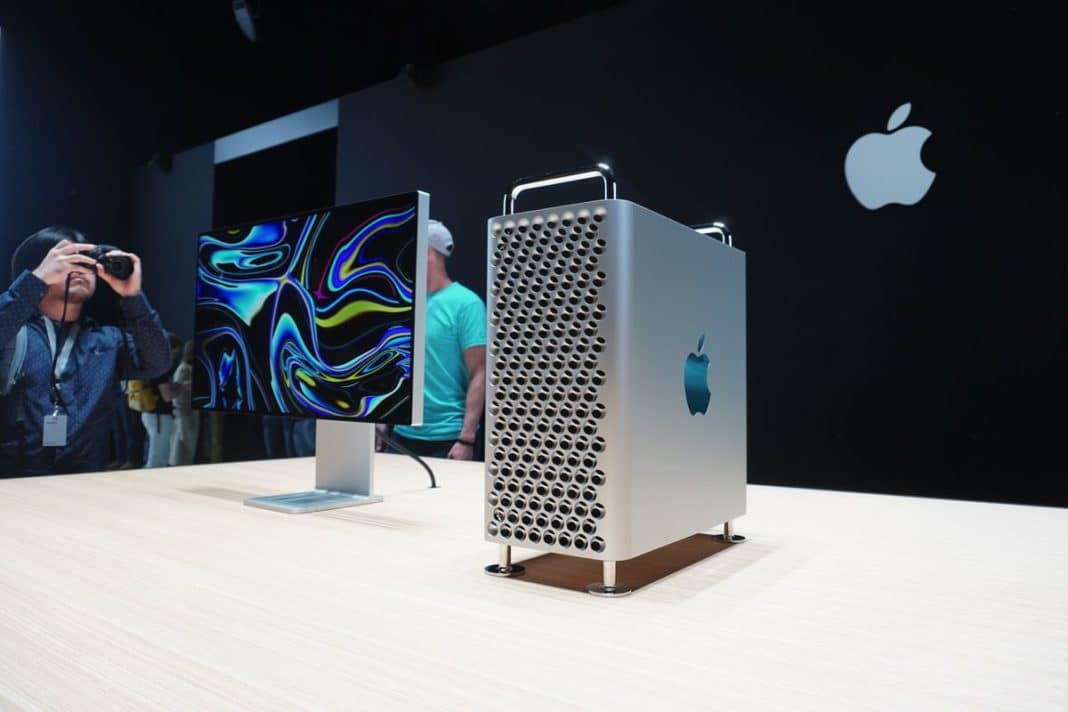 The new Mac Pro is not gonna be for everyone.

It’s hard to knock the new Mac Pro. After missing the mark big time with the 2013 trash can Mac Pro, Apple’s finally returning back to basics with a tower-based Mac that puts performance and expansion first.

Inside and out, the new Mac Pro is a beast of a machine. The new Mac Pro is expensive — really expensive, especially if you toss in the Pro Display XDR — but the general consensus seems to be that it’s the right computer Apple should have made for professionals years ago. 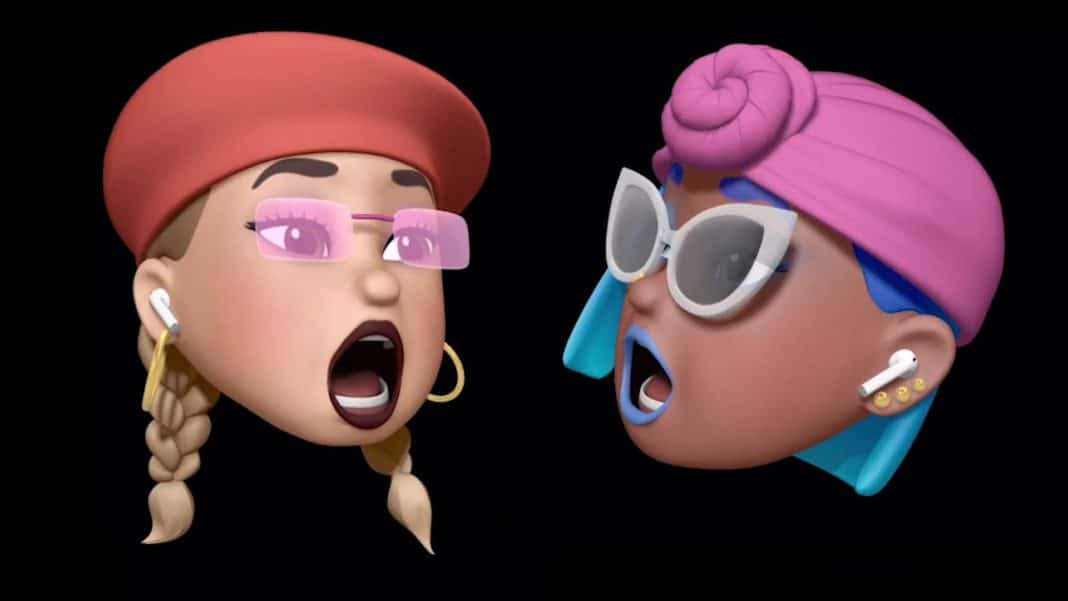 How Ants Turn Into Zombies

GizmoCrazed - October 2, 2018 0
David Hughes leans back in his office in a standard-issue professorship chair as Penn State students in a plaza behind him shuffle toward classes....

Think you have remarkable memory traits? Share them by participating in...

Now this… this is an ultra-wide monitor