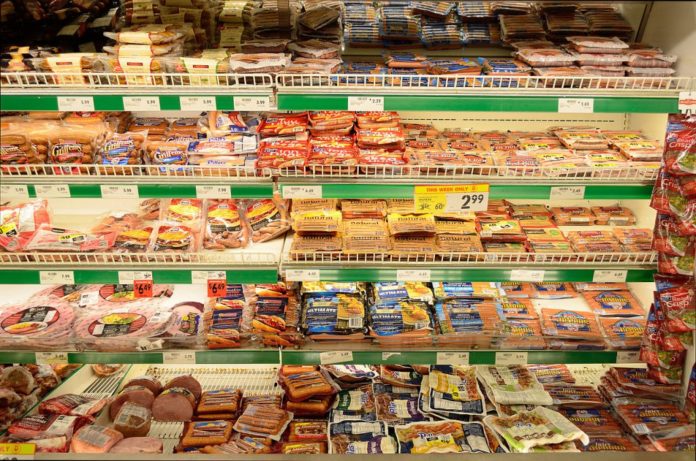 Well, the results are in. After years and years of nutritionists telling Americans to eat fewer processed meats and more fish, Americans are eating (drumroll please) … exactly the same amounts as they did 18 years ago.

A research team at Tufts University in Boston crunched the numbers, and published their study today in the Journal of the Academy of Nutrition and Dietetics. They looked at trends in consumption of processed and unprocessed meats using data from the National Health and Nutrition Examination Survey. Almost 44,000 Americans age 20 and over participated in the survey over the course of nearly two decades.

Processed meats have been cured, salted, smoked or otherwise preserved. In the study, the most commonly consumed by Americans was lunch meat, followed by sausages, hot dogs, ham and bacon. There’s increasing evidence that eating too many of these foods increase the risk for obesity, cardiovascular diseases, diabetes and some cancers — but that apparently didn’t affect eating patterns. The only change from 18 years ago was that people are eating fewer hot dogs and more bacon.

People also ate less beef and more chicken over the study period, but the same amount of fish. At least that’s one small win for nutritionists — excessive red meats have also been linked to health problems, including cancer.

“I am personally disappointed to see that there have been no changes in the amount of processed meat consumed … given the strong evidence linking high processed meat consumption and an increased risk of some cancers,” said cancer epidemiologist Fang Fang Zhang, who led the study, in an email.

Whose Fault Is This?

Sara Kirk is a professor of health promotions at Dalhousie University in Halifax. Not involved in this study, she studies things like why people don’t make healthy food decisions. And she isn’t at all surprised at these results.

“It’s really hard for people to change behavior when everything around them is modeling the opposite,” says Kirk. “It’s part of the culture that we’re faced with, and it’s not just a North American thing — it’s really everywhere.”

In other words, just telling people that eating lunchmeat increases their risk of cancer isn’t enough when lunchmeat remains the most convenient, delicious or affordable option.

“Recommendations are there to help shift people’s behaviors, but if you don’t have broader system changes as well, than they’re not going to make any difference,” says Kirk. An obvious first place to make improvements, she says, is in publicly funded places like health centers and schools.

“If the food environment in [these places] is actually making people sick, then that’s not a good use of public money,” she says. “You have a moral imperative really to try and change that and make it a healthier environment for people.”