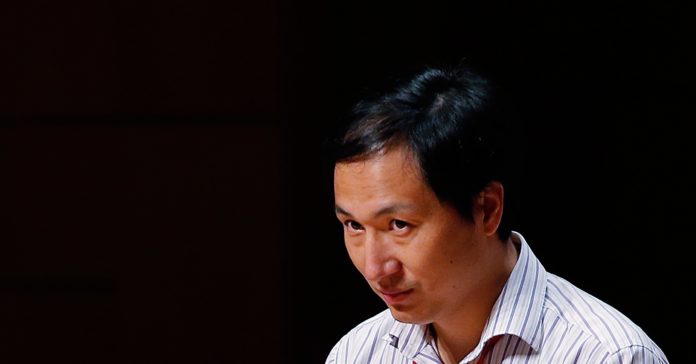 A missing chunk of DNA, 32 base pairs long and smack in the middle of the CCR5 gene, might be the most studied mutation in human history. The spontaneous deletion, which arose thousands of years ago, has a striking relationship with one of the worst human diseases: HIV/AIDS. People who inherit this mutation from both of their parents are naturally immune. The only two people to have ever been cured both received bone marrow transplants from people who carry the Δ32 mutation.

The pharmaceutical industry has invested heavily in trying to recreate the benefits of this naturally evolved anomaly using drugs and genetic engineering. And last year, a Chinese scientist named He Jiankui used Crispr to try to endow two human embryos with the Δ32 mutation and immunity to HIV. He’s experiments were widely condemned for smashing through ethical boundaries and breaking Chinese law. They also culminated in the birth of twin baby girls. But that was not the end of it.

Last week, it emerged that fertility clinics around the world have been seeking He’s advice on offering a CCR5 Crispr edit as a service to prospective parents. Now, new research is suggesting that such a procedure might actually be an early death sentence.

That’s because the Δ32 mutation doesn’t just make people resistant to HIV—it also shaves years off of people’s lives. In a study published today in Nature Medicine, scientists at the University of California, Berkeley, combed through more than 400,000 genomes and health records housed in the UK Biobank, a massive database of Brits that was recently released to researchers. They discovered that people with two copies of the Δ32 mutation died at rates 21 percent higher than those with one or no copies.

“There might be a public perception that one mutation does one thing, but biology doesn’t work like that,” says Rasmus Nielsen, an evolutionary biologist who coauthored the paper with one of his postdocs, Xinzhu Wei. Their results illustrate how a single mutation can affect many different traits simultaneously in ways that are very hard to predict, he says. “I hope this raises awareness that before we think about modifying the human genome with Crispr, we carefully consider all the possible effects of the mutations that we create.”

Nielsen and Wei had been interested in using the UK Biobank data to investigate how patterns of gene frequencies were being shaped by the pressures of modern life. They had a number of genes they wanted to look at, but after He’s Crispr Babygate scandal broke in November 2018, they decided to zero in on CCR5.

In the UK Biobank data they found two lines of evidence to suggest that these days, CCR5 actually is a net negative. In the first analysis they tracked how long people survived after enrolling in the Biobank study. They found that between the ages of 41 and 78, people with two copies of the Δ32 mutation had significantly higher death rates. They also observed that far fewer people with two copies enrolled in the study than expected, which they interpreted to mean that these individuals were less likely to survive into middle age than the general population. “Something has removed people with two copies of the mutation, and the likely explanation is increased mortality,” says Nielsen.

The UK Biobank data did not illuminate what specifically might be killing off these individuals, but earlier research in mice has shown that lacking a functional CCR5 gene increases susceptibility to other deadly infections, including influenza and West Nile virus.

To understand how the evolutionary winds might have shifted, it’s helpful to know something about the mutation’s origin story. A few thousand years ago, somewhere in the plague- and smallpox-ravaged lands of Northern Europe, a child was born missing a large chunk of DNA in its CCR5 gene. This gene coded for a receptor on the surface of immune cells useful for coordinating responses to invading pathogens. And this spontaneous deletion torpedoed CCR5 production—one copy shrunk the number of receptors on cells, two copies erased the receptor altogether.

In another time and place, such a mutation might have been a problem, but at that moment it proved an evolutionary windfall. That person’s family and their descendants outlived and out-reproduced their peers at an astonishing rate. Today, the Δ32 mutation occurs in about 10 percent of the population of Europe, in a decreasing gradient from north to south. Natural selection pushed it through the population about 100 times faster than if it were a neutral change to the genome. But with the invention of vaccines and the eradication of diseases like smallpox over the past century, the mutation has become less useful. According to Nielsen and Wei’s analysis, it’s now downright detrimental.

At least in populations that look like the UK Biobank. That data can’t reasonably be extrapolated to places like China where the pathogen environment and genetic backgrounds of the people living there look very different from the Brits. But it lends urgency to efforts to monitor the Crispr’d twins throughout the entirety of their lives. According to reports from the Chinese state-sanctioned news service, the girls will remain under government supervision in Guangdong Province, near where He conducted his rogue experiments.

For bioethicists like Stanford’s Hank Greeley, these latest revelations only further skew the risks of such a procedure to far outweigh the potential benefits. “I already thought He’s experiment was somewhere around 50 times higher than the ethical limit,” he says. “This just makes it even more outrageously risky.” Much of that calculus comes from the fact that neither girl was infected with HIV—they could have avoided the disease using safer, more proven methods, such as condoms and prophylactic drugs.

But for people who’ve already been infected, says Nielsen, it’s still much more beneficial to carry the mutation. That’s why he stresses that his research shouldn’t be interpreted as a warning against HIV/AIDS cell and drug therapies that target the CCR5 gene. And ironically, if they’re successful, the usefulness of the natural Δ32 mutation will decline even further. Given a few thousand more years, it might even disappear.