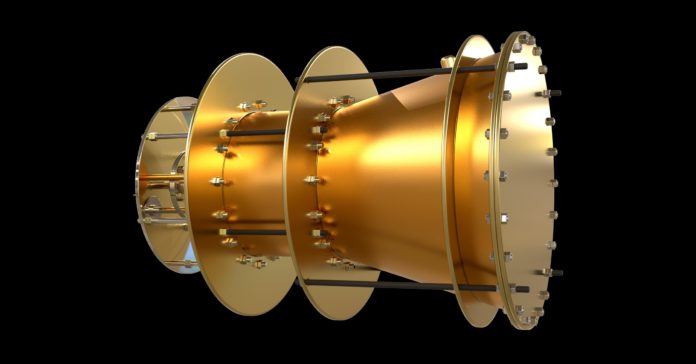 Since the birth of the space age, the dream of catching a ride to another solar system has been hobbled by the “tyranny of the rocket equation,” which sets hard limits on the speed and size of the spacecraft we sling into the cosmos. Even with today’s most powerful rocket engines, scientists estimate it would take 50,000 years to reach our closest interstellar neighbor, Alpha Centauri. If humans ever hope to see an alien sunrise, transit times will have to drop significantly.

Of the advanced propulsion concepts that could theoretically pull that off, few have generated as much excitement—and controversy—as the EmDrive. First described nearly two decades ago, the EmDrive works by converting electricity into microwaves and channeling this electromagnetic radiation through a conical chamber. In theory, the microwaves can exert force against the walls of the chamber to produce enough thrust to propel a spacecraft once it’s in space. At this point, however, the EmDrive only exists as a laboratory prototype and it’s still unclear whether it’s able to produce thrust at all. If it does, the forces it generates aren’t strong enough to be registered by the naked eye, much less propel a spacecraft.

Over the last few years, however, a handful of research teams, including one from NASA, claim to have successfully produced thrust with an EmDrive. If true, it would amount to one of the biggest breakthroughs in the history of space exploration. The problem is that the thrust observed in these experiments is so small that it’s hard to tell if it’s real.

The resolution lies in designing a tool that can measure these miniscule amounts of thrust. So a team of physicists at Germany’s Technische Universität Dresden set out to create a device that would fill this need. Led by the physicist Martin Tajmar, the SpaceDrive project aims to create an instrument so sensitive and immune to interference that it would put an end to the did-the-EmDrive-actually-produce-thrust debate once and for all. In October, Tajmar and his team presented their second set of experimental EmDrive measurements at the International Astronautical Congress and their results will be published in Acta Astronautica this August. Based on the results of these experiments, Tajmar says a resolution to the EmDrive saga may only be a few months away.

Many scientists and engineers dismiss the EmDrive because it appears to violate the laws of physics. Microwaves pushing on the walls of an EmDrive chamber seem to generate thrust ex nihilo, which runs afoul of the conservation of momentum—it’s all action and no reaction. Proponents of the EmDrive, in turn, have appealed to fringe interpretations of quantum mechanics to explain how the EmDrive might work without violating Newtonian physics. “From the theory point of view, no one takes this seriously,” Tajmar says. If the EmDrive is able to produce thrust as some groups have claimed, he says they have “no clue where this thrust is coming from.” When there’s a theoretical rift of this magnitude in science, Tajmar sees only one way to close it: experimentation.

In late 2016, Tajmar and 25 other physicists gathered in Estes Park, Colorado, for the first conference dedicated to the EmDrive and related exotic propulsion systems. One of the most exciting presentations was given by Paul March, a physicist at NASA’s Eagleworks lab, where he and his colleague Harold White had been testing various EmDrive prototypes. According to March’s presentation and a subsequent paper published in the Journal of Propulsion and Power, he and White observed several dozen micro-Newtons of thrust in their EmDrive prototype. (For the sake of comparison, a single SpaceX Merlin engine produces around 845,000 Newtons of thrust at sea level.) The problem for Harold and White, however, was that their experimental setup allowed for several sources of interference, so they couldn’t say for sure whether what they observed was thrust.

Tajmar and the Dresden group used a close replica of the EmDrive prototype used by Harold and White in their tests at NASA. It consists of a copper frustum—a cone with its top lopped off—that is just under a foot long. This design can be traced back to the engineer Roger Shawyer, who first described the EmDrive in 2001. During tests, the EmDrive cone is placed in a vacuum chamber. Outside the chamber, a device generates a microwave signal that gets relayed, using coax cables, to antennas inside the cone.

The device wasn’t the first time the Dresden team sought to measure nearly imperceptible amounts of force. They’d built similar contraptions for their work on ion thrusters, which are used to precisely position satellites in space. These micro-Newton thrusters are the kind that were used by the LISA Pathfinder mission, which needs extremely precise positioning ability to detect faint phenomena like gravitational waves. But to study the EmDrive and similar propellantless propulsion systems, Tajmar says, required nano-Newton resolution.

Their approach was to use a torsion balance, a pendulum-type balance that measures the amount of torque applied to the axis of the pendulum. A less sensitive version of this balance was also used by the NASA team when they thought their EmDrive produced thrust. To accurately gauge the small amount of force, the Dresden team used a laser interferometer to measure the physical displacement of the balance scales produced by the EmDrive. According to Tajmar, their torsion scale has a nano-Newton resolution and supports thrusters weighing several pounds, making it the most sensitive thrust balance in existence.

But a really sensitive thrust balance isn’t much use unless you can also determine whether the detected force is in fact thrust and not an artifact of outside interference. And there are plenty of alternate explanations for Harold’s and White’s observations. To determine whether an EmDrive actually produces thrust, researchers must be able to shield the device from interference caused by the Earth’s magnetic poles, seismic vibrations from the environment, and the thermal expansion of the EmDrive due to heating from the microwaves.

Tweaks to the design of the torsion balance—to better control the EmDrive’s power supply and shield it from magnetic fields—took care of some of the interference issues, Tajmar says. A more difficult problem was how to address “thermal drift.” When power flows to the EmDrive, the copper cone heats up and expands, which shifts its center of gravity just enough to cause the torsion balance to register force that can be mistaken as thrust. Tajmar and his team hoped that changing the orientation of the thruster helped address that issue.

Over the course of 55 experiments, Tajmar and his colleagues registered an average of 3.4 micro-Newtons of force from the EmDrive, which was very similar to what the NASA team found. Alas, these forces did not appear to pass the thermal drift test. The forces seen in the data were more indicative of thermal expansion than thrust.

All hope is not lost for the EmDrive, however. Tajmar and his colleagues are also developing two additional types of thrust balances, including a superconducting balance that will, among other things, help to eliminate false positives produced by thermal drift. If they detect force from an EmDrive on these balances, there’s a high probability that it is actually thrust. But if no force is registered on these balances, it likely means that all the previous EmDrive thrust observations were false positives. Tajmar says he hopes to have a final verdict by the end of the year.

But even a negative result from that work might not kill the EmDrive for good. There are many other propellantless propulsion designs to pursue. And if scientists ever do develop new forms of weak propulsion, the hyper-sensitive thrust balances developed by Tajmar and the Dresden team will almost certainly play a role in sorting science fact from science fiction.