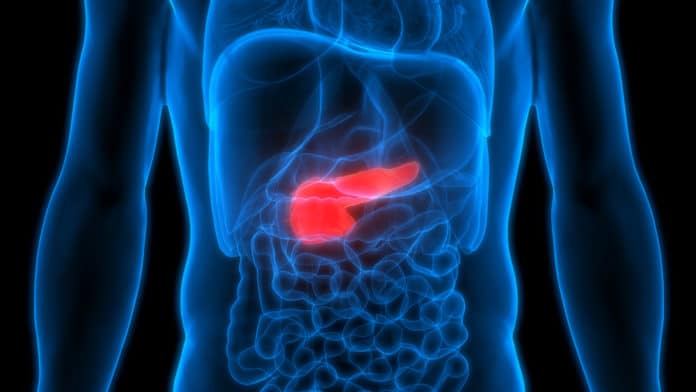 The location of the pancreas in the human body. (Credit: Magic mine/Shutterstock)

Pancreatic cancer is one of the deadliest forms of cancer — a virtually incurable condition. But now, a serendipitous discovery is providing new hope: A sugar molecule associated with the disease, but long thought harmless, known as CA19-9, actually plays an active role in the genesis of pancreatic cancer, researchers say, and could become a new target for therapy. The discovery uncovers new possible ways to identify early-detection markers, as well as hints at innovative treatments for pancreatic cancer.

For 20 years, David Tuveson, a cancer researcher at Cold Spring Harbor Laboratory in New York, has focused on developing model systems of pancreatic cancer to figure out the fundamental biology of the disease. In a study published today in the journal Science, he describes exactly how the sugar molecule CA19-9 participates in the development of pancreatic cancer.

“We studied CA19-9 because we were trying to make it a better biomarker for early detection of pancreatic cancer,” says Tuveson. Biomarkers are naturally occurring substances that help identify when a patient has a particular disease. In the case of cancer patients, they can help physicians predict how much damage the disease has caused. CA19-9, in particular, is overproduced in patients with pancreatic cancer and eventually gets added to other molecules. This sweet add-on can change the structure and function of the proteins it lands on.

But, human pancreatic cancer cells are not the only producers of CA19-9. Tuveson reasoned that by identifying the particular proteins decorated by CA19-9 in pancreatic cancer, he and his team could then establish better biomarkers for the critical early stages of the disease. But there was a problem: Mice don’t produce this complex sugar and they needed an animal model to test their hypothesis. So, the team used their mouse genetics expertise to create a mouse capable of producing CA19-9.

From Mouse to Human

Howard Crawford, a professor of molecular and integrative physiology at the University of Michigan not involved in the study, considers Tuveson’s discovery a game changer.

“The real key is this creation of the mouse model. CA19-9 is something that we’ve known about for over 30 years as a prognostic marker for pancreatic cancer, but this is a whole different paradigm,” says Crawford. “What used to be a marker is now [taking] a functional role in pancreatic disease.”

Even though the studies were carried out in mice, the authors are optimistic about the potential use of treatments involving CA19-9 to prevent pancreatic cancer in high-risk individuals. “The [clinical] potential is very real,” says Tuveson. “We can use an antibody against CA19-9 to block pancreatitis in the mice. And so by extrapolation, the hope is that such an approach may benefit patients with chronic pancreatitis.”

And unlike many biomedical discoveries, the potential translation of Tuveson’s findings from mice to humans might not be far away. Human CA19-9 antibodies already exist, and the German-based biotech company BioNTech has the exclusive rights for their use in the treatment and prevention of pancreatitis. Tuveson is hopeful BioNTech will start clinical trials soon. “This paper actually provides the preclinical rationale for conducting such a study,” he says.

Could there be other long-established biomarkers that may secretly be causing cancer? Most likely, but only time and further investigation will tell us. “There probably are lots of things that we think of as biomarkers that actually have causal roles in diseases,” says Tuveson.